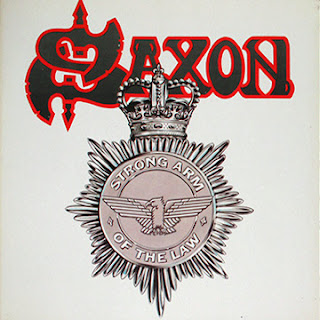 Apart from being one of the defining records of the NWOBHM (perhaps only rivaled in terms of influence by Iron Maiden's eponymous debut), "Wheels of Steel" was also a hit for Saxon, charting at #5 in the UK and prompting a series of very successful tours across the country, highlighted by a prestigious performance at Donnington's very first Monsters of Rock in 16 August 1980 (a single day after I was born, incidentally). Not at all suprisingly, everyone involved with the band agreed that a new album should be out as soon as possible, just so to keep momentum going, you know - but it's truly mind-blogging that they somehow managed to spawn "Strong Arm of the Law" only four months after "Wheels of Steel", which must be something of a world record I guess. Being written and recorded in such a rush, it's understandable that Saxon's third LP turned out to be a bit less cohesive and impressive than its predecessor - but let's face it, it's way enough an achievement that it ever managed to be a pretty respectable (and sometimes truly inspired) album after all.

Given the insane rush they had to go through to have the album out on schedule, it will cause no surprises to find little (or no) new features in Saxon's musical pallete this time around. It's in-your-face heavy metal with simple (but mostly very effective) riffs, simple (but catchy) choruses, simple (but engaging) song structures and simple (but not too cheesy) lyrics about... Well, there's actually a change of subjects on "Strong Arm of the Law", leaving the tales about motorcycles behind for a little while and focusing on more thoughtful matters such as living on death row ("To Hell and Back Again"), the assassination of US president John F. Kennedy ("Dallas 1 PM"), being pulled over by police in a US highway ("Strong Arm of the Law"), errm, girls having fun in a saturday night ("Sixth Form Girls"), the sheer power of metal ("Heavy Metal Thunder") and oh well I guess we better leave it to that. Anyway, I suppose you got my point here: no stunning signs of reinvention, just a truly competent band exploring the road they chose to the last consequences.

There are highlights, you can bet your ass on it. Opening number "Heavy Metal Thunder" is actually quite a scorcher, its main riff being a pretty decent prototype of faster things to come, almost like thrash metal painted on rock caves. Seriously, it surprises me that no thrash bands (as far as I know, at least) ever tried to give a run on this tune, as it sure have what it takes for a very Bay-Area-oriented rendition! "To Hell and Back Again" is also an immediate winner, being forceful and quite emotional at the same time, a contrast created not only by its heartfelt (if unpolished) lyrics but also by some nice melodies floating above the usual barriage of straight-to-the-point riffing. Great great stuff, really. "Strong Arm of the Law", the song, is pretty average mid-paced, heavy-rocking stuff, but with a chorus as catchy as that you can't just go there and dismiss it, you know. "20,000 Feet" is another inspired adventure on fast-paced territory, and "Dallas 1 PM" closes proceedings with a nice piece of heavy metal storytelling, enhanced by some astute (and, at the time, not very usual) samples of real-life broadcasts from the event it depicts. Five highlights out of eight songs, how's that for a short-notice release like this one?

Now, I understand many fans and a number of critics consider this to be the finest Saxon album, but I have to stick my neck out and humbly beg to differ. "Taking Your Chances" is admitedly a perfectly decent song with a few good riffs to its credit, but I'm afraid the songwriting isn't as refined as it could, with a few rough transitions and a unspectacular chorus. It should have stayed on the oven a little longer, I'm afraid. I also fail to enjoy "Sixth Form Girls" as most people seem to do: I'm being a bit too picky here perhaps, but it seems to me that this song starts quite promising and loses steam halfway through, with a chorus that sounds more like a bridge repeating itself over and over and a long final solo thrown in at short notice just to round things up. And "Hungry Years" is truly monotonous bluesy-metal stuff that never seem to get going properly, unfortunately. To my ears, these three tracks are those who suffer the most from the ridiculously short amount of time Saxon had to hone their ideas before entering the studio - nothing remotely shameful of course, but enough evidence to dispute the idea that this LP is beyond criticism.

I will still give "Strong Arm of the Law" a 4-star rating anyway, as it belongs on the holy trinity of early Saxon releases and shows a band full of talent, energy and sheer enthusiasm. Anyone with a sincere passion for heavy music will find things to enjoy around here, and its place on British metal history can never be understated. The flaws will pale in front of the many winners within the grooves, so let's not overstate the minor shortcomings: this album is good, pretty bloody good actually, and if you ever wore leather pants and a denim jacket full of patches this is a record you should really listen to from time to time. And I just gave a huge clue on the following album from Saxon I'm about to review - not that you really needed it, but there you go!

Have you been involved with any of the bands mentioned here? Have any extra info and/or corrections? Please e-mail me at drequon@gmail.com and let me know!
Postado por Drequon às 21:15