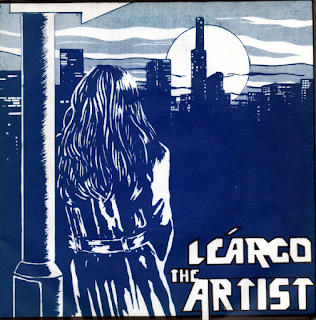 Despite the widespread narrative that rock music was 'dead' in the late 1970's before it was 'saved' by punk rock, the fact is that UK's rock scene was very active in the turn of the decade, with many youthful combos making a fair bit of noise in pubs and clubs all over the land. Granted, there was little (if any) hope for a major record deal for most newcomers to the scene (in fact, few bands managed to sign with high profile labels, even at the height of the NWOBHM boom), but that alone is no indication that nobody cared. From the multifarious groups doing the rounds in the UK Midlands while the NWOBHM phenomenon was taking shape, the bizarrely-named Léargo (not a clue, really) were on the periphery of the genre really, being far more attuned to prog rock and AOR rather than anything more forceful or metallic. Still, they're unmistakably connected with the NWOBHM nowadays, their sole "The Artist" 7'' single from 1979 now being a clear collectable for aficionados of the genre, so it totally makes sense to drop a few lines about them around here, even if they seemingly never really wanted to jump into the NWOBHM bandwagon at all.

The 4-piece were rather popular in and around the Birmingham area, with lots of well-documented live appearances to their credit. The buzz around them seems to have been enough to encourage the Motor City Rhythm label to comission a stylish presentation for the band's innaugural release, with nice artwork (the illustrations having something to do with the lyrical topics of both songs, I guess) and an insert with lyrics and songwriting/band credits. The production values are less than stellar though, and the somewhat muddied sound is a slight detriment to the band's strenghts. Curiously, it seems that "Played Out Angel" is supposed to be the A-side, even if the record is named as "The Artist" on the front cover - I don't know, maybe the band saw the release as an EP or something. This one won't come cheap even without the picture sleeve, mind you, so perhaps it's a good idea to wait for a full package if you really feel like buying it, as the careful presentation really adds to the impact of the music herein. 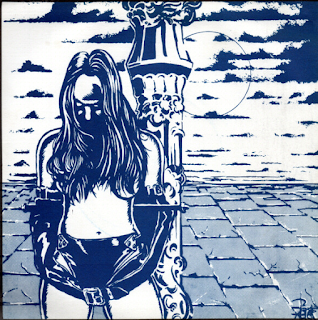 None of the songs here featured are heavy metal by any stretch, as mentioned above, but I'd say "The Artist" is the most intense tune by far. The drumrolls during the intro may be deceptive for first-time listeners, but don't let yourself be fooled: despite some moments of relative intensity, it's a very melodic, evocative number way more attuned to Pendragon and Liaison than anything more metallic. The lyrics about the carefree, do-what-thou-wilt lifestyle of some kind of artist (oh really?) fit well to the atmosphere created by the instrumentation, and I'm sure those who enjoy the aforementioned bands and/or late 70's prog rock as a whole are very likely to enjoy this particular track. "Played Out Angel", on the other hand, is something of a letdown in comparison: I really like the drumming, and the busy basslines deserve some respect as well, but this tale about the life and regrets of a prostitute (or perhaps a groupie?) seems to never get off the ground properly, a feeling not at all alleviated by the nondescript, unremarkable chorus. Not a disaster really, just a markedly less accomplished tune than its imaginative, way more engaging counterpart. Still, "The Artist" is a nice listen as a whole, and you're well advised to it a chance if a copy ever comes your way (and your wallet can afford it, of course).

The insert says the two  songs are taken "from the forth coming album", but I'm positive such a record was never pressed in vinyl format - in fact, I have a strong suspicion it was never even recorded at all. Similarly, the persisting rumors about a seldom-seen follow-up 7'' from Léargo (including some "test pressing" allegations coming from obscure corners of the collecting scene) can be safely dismissed as little more than urban legend: though Motor City Rhythm apparently did made some preparations for a sophomore release, the label had ceased operations completely by the latter half of 1980, which makes the possibility of marketing a single mere weeks before leaving the business extremely unlikely (furthermore, the fact that no credible sources seems to have seen a copy, let alone own one, speaks volumes). Still, it's safe to assume Léargo did some further visits to the studio, and a handful of non-single tracks apparently got as far as receiving some limited airplay on local radio in the Midlands, so it's not beyond the realms of possibility that some demos and/or cassette-only releases might still exist out there, though I've never heard of any surviving copies anytime, anywhere. If you happen to know better (most of all if you used to have some direct involvement with Léargo in the past), please kindly get in touch! 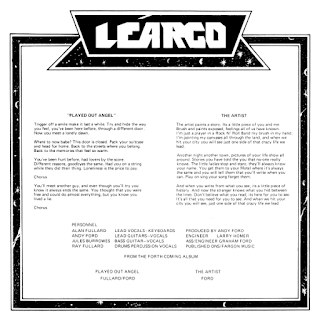 I'm not sure for how long the band persevered under their original guise, but it's now fair common knowledge that Léargo metamorphosed into Sumo Giants sometime in the early 1980's, adopting a tuneful, more commercial sound. They recorded a session for Tommy Vance's 'Into the Music' in May 1985 (never heard it, and I would really love to!) and got as far as to release the "Tower of Babel" single in 1988, the title track being produced by none another than Jeff Lynne of Electric Light Orchestra's fame. The 12'' version of this release presents an old Léargo's track named "Water" as a bonus track, so I guess it's a mildly interesting artifact for obsessive completists, though rest assured it's nowhere near heavy rock territory, let alone NWOBHM. In later years, drummer/backing vocalist Ray Fullard (who seems to have lend a hand for lo-fi/post punk outfit The Digital Dinosaurs sometime in the early 1980's) have been collaborating with Althea Gaye (a X-factor show veteran) in a duo named Octave Tinkling Twosome, while his brother Alan is a reasonably successful artist in UK's folk rock scene. Guitarist Andy Ford would also have a go (now as a bassist) on an early 1990's indie rock band named Hellfire Sermons, so it's fair to say Léargo's bandmembers were (and probably still are) really commited to the cause of playing music. 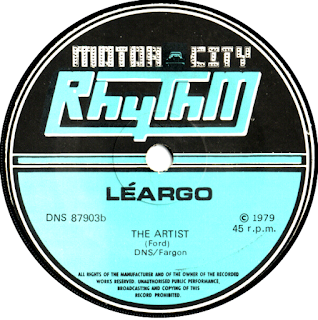 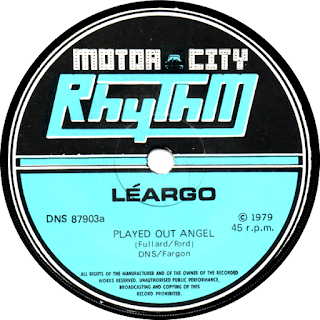 Many thanks to the Heavy Metal Rarities forum for picture sleeve, insert and label scans!