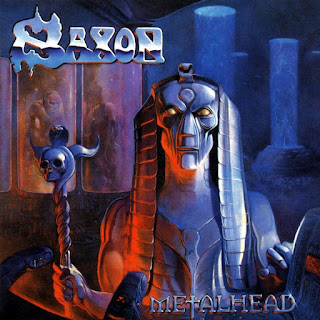 Life is never going to be a walk in the park if you're in Saxon, you know. It's fair to say they were doing fine in the tail end of the 1990s, moving forward with a slow-but-steady comeback that cemented their reputation as flamebearers of the NWOBHM and a force to be reckoned within the old-school-metal community. But the relentless touring schedule took its toll upon Nigel Glockler, and the drummer took an extended leave while recovering from some torn muscles in his neck and shoulder, being replaced by German sticksman Fritz Randow (ex-Eloy/Victory/Gamma Ray/Sinner etc). Roughly at the same time, some legal wrangling would soon rear its ugly head, when ex-members Graham Oliver and Steve Dawson registered the Saxon trademark and started booking some club performances under that name - something thar Biff Byford and his lawyers did not take lightly, as I'm sure you can imagine.

The task of crafting songs for a new album will undoubtedly get a lot more difficult under such circumstances, and it's perfectly understandable that a few misfires may happen along the way. The lads from Barnsley always kept a strong work ethic throughout their career, and "Metalhead" (subtleties be damned and all that) came out in 1999 as scheduled, showing that Byford, Quinn, Scarrat, Carter and new boy Randow weren't willing to risk losing momentum. Sheer persistence, you see, and it's a beautiful thing - but some albums are stronger than others, and the degree of inner turbulence prevented Saxon from delivering their best on this particular one.

After a pretty anodyne intro, the title track comes out with some interesting mid-tempo riffing, but leaving something to be desired when it comes to melodies - the chorus, in particular, is far from memorable and doesn't carry things forward as strongly as one would expect, which is something of a letdown considering the usual high standards achieved by most of the Saxon's opening numbers. Fortunately, things are rapidly salvaged by the truly excelent pair that follows, "Are We Travellers in Time" (with a magnificent, otherworldly atmosphere) and "Conquistador" (more upbeat and with a grandiose, powerful chorus, although I can't see much of a sense in the flamenco-tinged opening to be honest). It could have been a brilliant album if most other songs were of similar calibre, but it's not the case, really, and "Metalhead" struggles to keep the listener's attention throughout.

Songs like "What Goes Around", "Prisoner" and "Watching You" are serviceable, but not much else, and the fact that some filler material appears quite early in the running order is clear indication of the difficulties the band were facing to focus on the music with so many distractions coming their way. "Piss Off" is even weaker, an attempt to mix some Pantera-style groovy riffing with more melodic, 80's metal intonations that simply lack the charm and bite one is accostumed to hear from Saxon. "Song of Evil", on the other hand, is a pretty decent tune as a whole, but some of its most crucial transitions sound a bit forced, like the five-piece just needed to rush into the studio and therefore were unable to get things done properly. It ultimately succeeds, you see, but still you get the feeling that the guys just fell very short of doing something really special with this one. Such is life.

But fear not, fellow headbangers. The hard-hitting "All Guns Blazing" is an excellent excuse for some good, healthy headbanging, and you'll be screaming your lungs out with the chorus without even notice, even though the wisdom of slowing things down in places can surely be called into question. And "Sea of Light" is a very nice closing number, a more pensive number that manages to conjure a grandiose, highly emotional atmosphere without ever sounding forced or overblown. These, along with the aforementioned "Are We Travellers in Time" and "Conquistador", are the moments when this CD really peak, being truly inspired additions to the group's legacy. 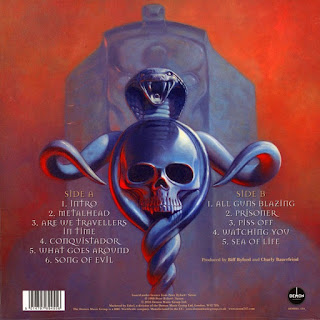 With four very good songs out of ten proper tracks, and also some interesting things going on elsewhere within the grooves, labeling "Metalhead" as a failure would be way off the mark if you ask me. Still, it feels like the album just drags itself forward in between its most accomplished tracks, and the considerable lack of replay value on most songs means that you'll hardly play the record from first to last on a regular basis, if at all. Maybe just a couple more enthusiastic tunes would have done wonders around here, but we'll never know for sure. "Metalhead" is a good enough CD, and sure helped to sustain Saxon's renewed status as a reliable metal entity, but it's not a must-listen for anyone but the truly persevering fans of the band. More casual listeners will probably enjoy it to some extent, but there are better records to use as a starting line if you're a beginner in Saxon's music.

Have you been involved with any of the bands mentioned here? Have any extra info and/or corrections? Please e-mail me (drequon@gmail.com) and let me know!
Postado por Drequon às 19:15 Nenhum comentário: