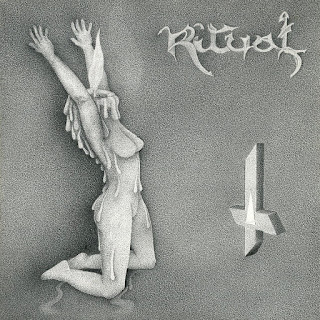 These belgian doom-metallers were doing the rounds for most of the 80s, recording the four songs of this EP as early as 1982. Originally released as a demo, the songs would appear on vinyl only in 1986, when a friend of the band (namely Nicolas Parent) took to himself the responsibility to press 500 copies of that recording and release it as an independent EP. They were reasonably popular in the Belgian metal scene, with a loyal following and a lot of shows going on, but didn't gather any serious label interest - and this 7" was like a final bet for the band, hoping that it would open some important doors in the business. I must be honest, though, and say that it took me a while to understand that the central figure of the picture sleeve was actually a candle-woman - that would be a pretty crappy superpower to have, but oh well, nevermind.

Many (if not most) copies from Ritual's sole EP were originally unsold, being stocked at bassist Raymond Roobaert's parents house for many years. When Raymond (also known as Doc Sinius) unfortunately died in 1997 due to a liver disease, all unplayed copies went missing - allegedly, an unknown individual just took the boxes away with him, without the knowledge of Raymond's parents. There's a strong possibility that the copies appearing for sale from time to time are remnants from this theft - something that adds a bit of moral dilemma to any buyers of this elusive slice of vinyl. 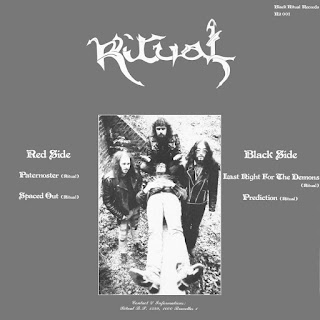 When it comes to music, Ritual delivers an interesting kind of Heavy/Doom with macabre lyrics and a somber feeling throughout, even though the tempos are more presto than adagio, if you know what I mean. The vocals are dramatic and intense, with a lot of growls and high-pitched screams - not in the same league of a King Diamond, sure, but it's still a job well done in this case. The basslines are really good too, and the guitar deliver some good hooks and leads, although it feels a bit too simplistic sometimes. All four songs are good, but I think that the only really memorable song would be "Spaced Out", which is actually an impressive stab at doomy music. Oh well, it's all personal opinion, you know - give it a try, because it surely deserves it.

Ritual finally gave up in 1987, a decision motivated by both lack of finances and label disinterest. Unfortunately, two of the musicians here featured are no longer alive - Doc Sinius, aka Raymond Roobaert, died in 1997 as told before and drummer Eric De Boeck couldn't resist leukemia and passed away in 1999. Ritual actually came to record a new demo as far as 2000, with remaining musicians Alain Vanderberghe and Didier Retelet being suported by Xavier D (B) and Eddy De Logi (D) - both long-time associates of Ritual, acting as roadies in the (not so) dim and (not that) distant past. Despite being another interesting effort with good songs on display, it seems to have been a swansong rather than a resurrection, as Ritual didn't release any further material and their MySpace page is inactive since 2009. Still, singer Vanderberghe kept himself very busy, lending his lungs to a number of bands (Attractive Burial, Incubus, Storm, Hitchiker, The Guild and Dream Machine, to name a few) and keeps a MysPace page with songs from most of his ventures. In Dream Machine, he was joined by guitarist Didier Retelet (or H.H. Del Rio, if you prefer). 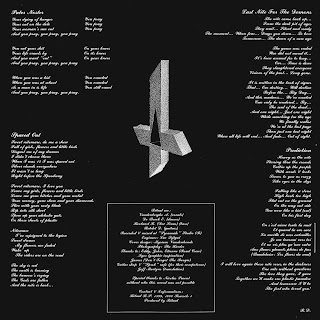 All songs by Didier Retelet 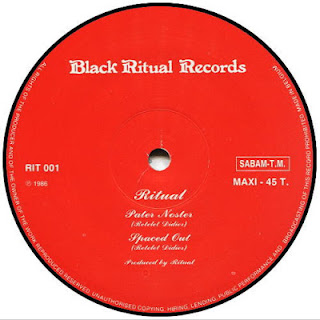 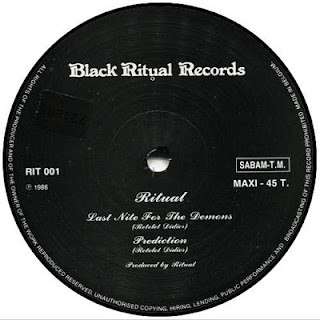 Extra thanks to Strappado Metal Blog for picture scans!

Have you been involved with any of the bands mentioned here? Have any extra info and/or corrections? Please e-mail me at drequon@gmail.com and let me know!
Postado por Drequon às 11:13 Nenhum comentário: 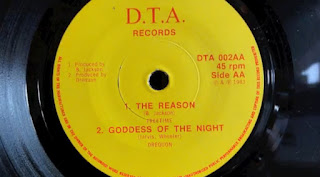 And now we go to the band I owe a name to! Well, not THAT much, actually, but Drequon was always a questionmark for me since I first read about them on Malc McMillan's mammoth NWOBHM Encyclopedia. Their only known recording is "Goddess of the Night", a song included on an utterly obscure 7" compilation EP on DTA Records, released on 1983 without a name, a picture sleeve or anything else. The EP also presents the bands Applicators, Midnight Ramblers and Freetime - none of it being palatable for dedicated headbangers, or so it seems. Anyway, it was long years of imagining what Drequon's music would sound like - and the name Drequon actually sounds so good to me that I decided to use it as a soubriquet in some Metal-related forums and now here on this blog.

Well, I still didn't have the chance to listen to the full compilation - something that I would really like to, so if you happen to have the full thing, please get in touch. But luck was on my side when I located, a few weeks ago, a good mp3 file with the elusive track from the mysterious Drequon - and it wasn't without trepidation that I pressed the Play button, expecting everything from a masterpiece to utter musical disaster.

And it turns out that "Goddess of the Night" is a perfectly good song, actually. The feeling is obscure, even a tiny bit somber, although we are far from Pagan Altar territory here. The opening guitar/bass lead is interesting and we can hear some very nice riffing too, specially towards the end. The vocal lines are very simple, but adequate, though I honestly think that the lyrics are immature, semi-mythological nonsense with no real merit whatsoever. But oh well, they were probably a bunch of adolescents doing their best to write some good Heavy Metal songs, so let's not be too harsh on them, as they would almost surely do better if given the chance to evolve as songwriters. All things considered, "Goddess of the Night" is a competent and promising song full of good ideas, and it's inevitable to wonder what other goodies they would be able to deliver if they received a little more attention and encouragement. 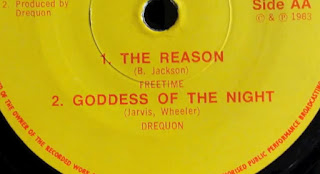 Of their earlier or later recordings (if there were any), none is known at present. In fact, they seemingly came and went in a very short period of time, leaving only this ultrarare vinyl memento to remind us of their existence. Is there anything else out there? I would REALLY like to know. If you have any clues, please get in touch! :)

Have you been involved with any of the bands mentioned here? Have any extra info and/or corrections? Please e-mail me at drequon@gmail.com and let me know!
Postado por Drequon às 21:32 Nenhum comentário: