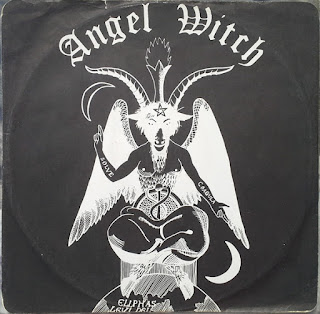 It's a near-undisputed fact that the music of Angel Witch brings in itself most of the defining features of the NWOBHM, being one of the fundamental introductions to any novice who wishes to understand what was going on in the UK back in the early 1980's. But there's also a lot to learn from the whole process that shaped this respectable British metal entity, I think, as it comes to show how NWOBHM was never a case of over-produced, tailored-for-the-market bands with the right looks and sound, but rather of youthful, passionate hopefuls that, by playing their hearts and souls out in whatever local haunt would have them, gathered a loyal following that soon became too large to be ignored. Starting sometime in 1977 under the name Lucifer, the quartet - the now legendary Kevin Heybourne (V/G) being originally assisted by Kevin Riddles (B), Dave Hogg (D) and second guitarist Rob Downing - soon adopted the more recognizable (and slightly less tongue-in-cheek) Angel Witch moniker, playing live tirelessly in and around London for the benefit of enthusiastic and ever-increasing audiences.

Those were the punk rock days in the UK back then, so it was no easy task to raise any eyebrows with an unashamedly heavy, considerably complex, riff-oriented brand of rock music. It simply wasn't the "right" thing to do if you were trying to make a break, you know. But Angel Witch were good, people would always be there to see them play, and like-minded groups like Praying Mantis, Samson and Iron Maiden were also packing pubs and clubs on a regular basis, all this giving some loud and clear indication that there was a niche of market being ignored by labels and promoters after all.

In fact, after recording a well-regarded demo halfway through 1978, things definitely looked promising for the lads. The echoes from that growing 'new metal' scene somehow reached the offices of none other than EMI, and those responsible wisely felt there was a bit of a mileage on all those long-haired kids playing metal after all. This led to the seminal "Metal for Muthas" compilation LP in early 1980 (soon to be properly reviewed around here), and with Angel Witch's contribution ("Baphomet") being easily one of the highlights of the LP, Heybourne and his cohorts were swiftly encouraged to make a live-in-the-studio appearance for BBC's "Friday Rock Show" (aired in March 14, 1980). The audience's response was remarkably positive (the fact that "Extermination Day" later made it into the "Metal Explosion" LP of session highlights is surely not a coincidence, you see), and it comes as no surprise to learn that EMI gave the thumbs-up for the assembling of a proper single.

Angel Witch's "Sweet Danger" was released in both 7'' and 12'', both presenting the baphomet visage that became a landmark image for the band and one of the most memorable artworks from the entire NWOBHM era. By the time the tracks were recorded, the group was already slimmed down to a trio, with Rob Downing packing his bags just when "Metal for Muthas" was hitting the shops. As we all know, Angel Witch soldiered on without a replacement, suffering little or no turbulence in the process. 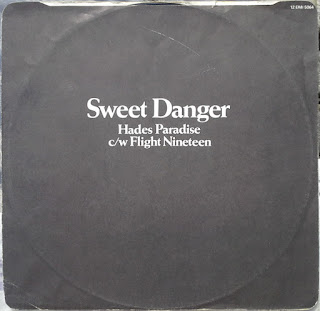 It was a wise choice to give "Sweet Danger" pride of place, you know: it's a very catchy (but undeniably strong) number, whose more accessible leanings sound anything but forced and with arrangements that allow generous space for all musicians to show some of their individual skills. Angel Witch present themselves like a band that really means business, confident about their collective abilities and  prepared to take UK's heavy rock scene by storm, no less. It's a metal classic in all its glory, and I tend to think this version is slightly better than the one featured on the "Angel Witch" LP, so there are really no excuses: any serious NWOBHM collector must own a copy of this, whether in its original vinyl format or as any of the many re-releases it received through the years. It isn't that much of a challenge, you see.

Both "Flight Nineteen" and "Hades Paradise" (the bonus track for the 12'' vrs, mistakenly named as "Hadies Paradise" on the label) are perhaps not in the same league of the A-side, but both present merits well worthy of mention. "Flight Nineteen" is forceful and engaging, with a nice storytelling about some aeroplanes that disappeared without a place in the Bermuda Triangle. Nothing too sophisticated, that's for sure, but it works quite well in its intended purpose and most metalheads will have a pleasant time listening to this one. On the other hand, "Hades Paradise" is a more complex, slightly atmospheric number with many nice transitions and Kevin Heybourne's voice (not the most technical delivery ever heard in metal, but quite distinctive nonetheless) surely at its most confident and interesting. Truly good songwriting throughout, and "Sweet Danger" (the single/EP) is a very important piece of NWOBHM history that had a strong influence on much of what happened next.

The release was quite successful, to an extent that it actually made it into the mainstream charts - in fact, it reached position 75 (the lowest position to be mentioned in the music weeklies) then disappeared without a trace next week, but never mind. Despite its very good result in terms of sales, EMI didn't offer the trio a long-term deal, opting to bet their chips on Iron Maiden instead (and who can blame them?). Not a hard blow for Angel Witch anyway, as they kept a very busy touring schedule throughout 1980, including a prestigious appearance at that year's Reading Festival. It was the live environment that opened doors for Angel Witch in the first place, and it was also very important to keep record labels interested, with Bronze finally making a firm commitment towards the release of a debut LP. 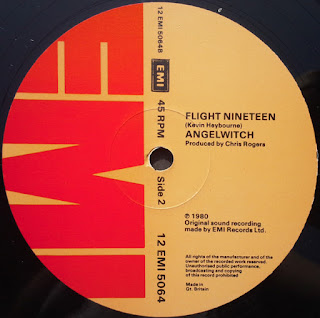 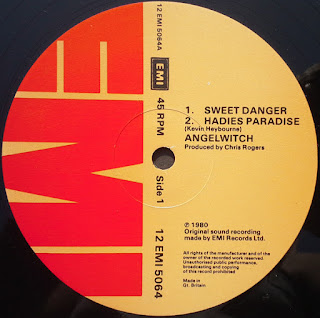 Million thanks to Discogs for picture sleeve and label scans!

Have you been involved with any of the bands mentioned here? Have any extra info and/or corrections? Please e-mail me (drequon@gmail.com) and let me know!
Postado por Drequon às 08:18 Nenhum comentário: 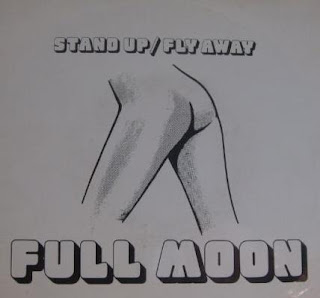 Pretty much like any artistic movement you can possibly think of, NWOBHM didn't exactly come out of thin air, believe me. The notion that hard/heavy music got into hibernation sometime in the mid 1970s and suddenly re-emerged in 1979 with hundreds of youthful and enthusiastic British bands is a bit of a non-starter, though the doors were mostly closed indeed for new acts playing metal in the second half of that decade. Which is not to say every rocker in the country simply jumped into the punk rock bandwagon at the earliest opportunity, of course: many bands kept trying their luck with heavy rock, and many people were willing to attend the pubs and clubs to enjoy it. It's just that the labels and media turned their ears in a different direction for a while, something that surely didn't help matters for late-'70s bands unwilling to follow the trends, but that's life.

Not to be confused with the British-Metal-meets-Hawkwind band with the same name from the late '80s (a nice group BTW, you should really check them out), this particular Full Moon seems to have hailed from London or thereabouts, and were doing the rounds in the final years of the 1970s, without creating a significant buzz around themselves at any stage. I must admit I don't know much about the band's history prior to their only, privately-pressed vinyl legacy (1979's "Stand Up" B/W "Fly Away", that is) but, judging from the record's not remotely subtle front cover, they weren't exactly trying to spearhead the resurgence of metal music in the UK or anything like that. Similarly, I'd say that the quintet's moniker of choice wasn't about any celestial phenomenon at all, but rather a flippant mention to the undressed buttocks of an unidentified lady, not that the artwork would leave much room for any doubt.

Slightly tasteless picture sleeves aside, "Stand Up" brings some reasonably forceful guitar work in places, though the vocal lines are peculiarly closer to '70s pop rock music. The politically-motivated lyrics are pretty uncommon for pre-NWOBHM bands, and there's more than enough twists and turns going on (including a nice semi-martial instrumental interlude) to warrant a careful listen. Unfortunately, "Fly Away" is not in the same league of its pretty respectable predecessor, being a semi-ballad way closer to soft rock than anything more engaging and/or individualistic. This particular tune features the backing vocals of Debbie Boner more prominently (and oh yeah, her surname is Boner, I couldn't help but notice that), but her efforts are not enough to liven up this quite tepid offering (and it's not her fault really, as it was a hopeless cause from the start). Granted, there are far worse offerings from the period in question (some inexplicably well regarded among collectors, for no fathomable reason), but I'm afraid this particular flipside won't ever see much of the needle side in your turntable, if you know what I mean. Not a record worth selling your soul to the devil in order to obtain a copy, you see, but still an artifact of some interest for those willing to have a sizeable pre-NWOBHM collection, most of all due to the A-side. Most copies still in circulation are somewhat expensive, but I have learned of people who managed to find it in bargain bins around the London area not so long ago, so keep an eye out for it (not that you would miss its eye-catching cover, of course) if you happen to be around this particular area on a regular basis. 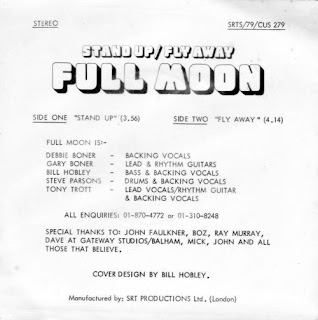 I have absolutely no idea whatever happened to Full Moon in the years after this release (and if you happen to know any detail, even the slightest, you're more than welcome to drop us a line), but I think it's safe to assume they didn't really survive into the 1980s, given that there's little to no mention to live outings or any further appearances at the height of the NWOBHM influx. Maybe it was a matter of bad timing really. Whatever the case, fact is that guitarist Gary Boner (yeah, his surname is Boner, how funny is that, right?) and bass player Bill Hobley kept plugging in with a blues rock outfit named Roadhouse (not to be confused with Pete Willis' post-Def Leppard project), a reasonably successful proposition that is pretty much active to this day. It's a strong indication that these guys were never that much into metal at all, but it's heartwarming to learn that at least some of them are still involved with the music scene.

Have you been involved with any of the bands mentioned here? Have any extra info and/or corrections? Please e-mail me (drequon@gmail.com) and let me know!
Postado por Drequon às 18:26 Nenhum comentário: