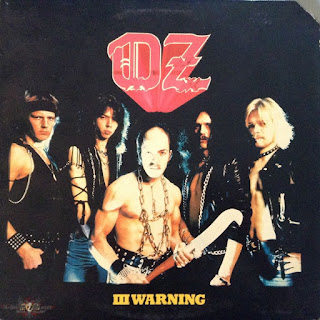 I'm not really sure whether Oz seen this release as a most challenging endeavour after the sheer irresponsible metal genius of "Fire in the Brain" or as, you know, just another album. We tend to romanticize events and create convoluted narratives about things that were quite simple when originally taking place, and perhaps seeing "III Warning" as a difficult follow-up for a seminal release only makes sense now that we already know the full chain of events. Though seen now as a heavy metal underground classic, "Fire in the Brain" did not exactly sell like cold water in the desert at the time of its release, so perhaps the musicians were seeing their third LP as a chance to climb up a few more stairs rather than staying at the top of their staircase, if this clumsy metaphor makes any sense. Actually, I think this standpoint makes a lot more sense when listening to "III Warning" with an inquisitive mind, as it would appear as a somewhat pointless step backwards if simply put under the shadow of what was made first.

"Fire in the Brain" was impressively intense, with a tongue-in-cheek, as-metal-as-it-gets approach that was (if we're to be honest) constantly bordering very cheesy waters, though they sure managed to survive all risks and create a kickass LP to die for. "III Warning" keeps much of the vibe of its predecessor, but also add some slightly more varied elements to the table - a choice that sure makes sense when you're trying to reach a wider audience, which is what they were probably aiming at while writing this album. The opening title-track is perhaps the most accomplished song from the entire record, and it sure shows a band trying to progress without losing identity in the process. It's sure less frantic than they used to be, but Oz expertly uses all the songwriting tricks they had learned in the previous years to achieve a very specific result - that is, to make everybody headbang like mad. This song is just as classic as nearly everything on "Fire in the Brain", but it is so much more by design than by chance, which is just fine I guess. Ape De Martini's singing is very impressive too, something that only enhances the very nice impact of this killer tune.

The problem with "III Warning" (and a shortcoming that would become more evident in following releases) is that this attempt to write more varied stuff perceivably weakens the cohesive element that was much of what gave "Fire in the Brain" its near-irresponsible charm. If energy is your forté, you must hit the nail right on the head every single time so you don't lose pace, and I must say that "III Warning" glaringly stumbles on a few occasions. "Rock 'n' Roll Widow" is a throwaway semi-metal tune that wouldn't be out of place in the band's debut "Heavy Metal Heroes" (and I don't mean it as a compliment), while final song "Total Metal" tries to be anthemic but only turns out to be very cheesy - far from a surprise with a songtitle like that, you know. On the other hand, "Born Out of Time" and "Runner" are not exactly bad, but they just keep things too safe for their own good, being considerably derivative and uninspiring as a result. And when you made something of a name for yourself out of being insanely enthusiastic, playing metal by the numbers is not quite the right way to go next. 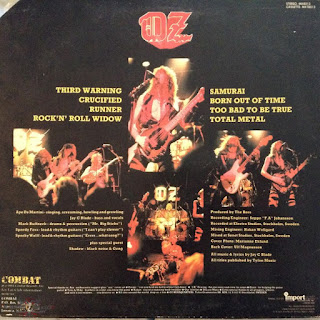 Fortunately, the rest of the album is pretty cool. "Crucified", "Samurai" and "Too Bad to Be True" are slightly more complex tunes than the band's previous output, but every bit as strong and exciting as Oz used to be, being more than convincing excuses for some good-humoured, healthy headbanging. Although "III Warning" didn't manage to propel Oz towards premier-league status, it's also nowhere near a real disappointment: it's a pretty decent record with some very strong compositions, that could perhaps have been a true winner with a bit more of quality control. Unfortunately, it was pretty much a downward spiral from that point onwards, but it's still a safe purchase for anyone who enjoys a good dose of 1980's European metal.

All music and lyrics by Jay C. Blade

Thanks a lot to tshirtslayer for picture sleeve photos!

Have you been involved with any of the bands mentioned here? Have any extra info and/or corrections? Please e-mail me at drequon@gmail.com and let me know!
Postado por Drequon às 19:06 Nenhum comentário: