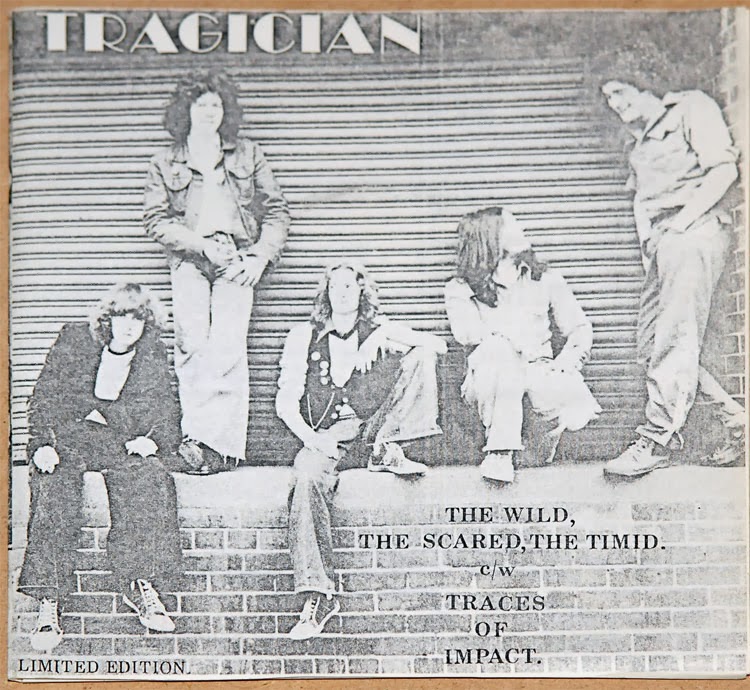 Released by the tiny Look Records (a label that used to print small vinyl runs for cabaret outfits to sell at gigs) in 1979, Tragician's "The Wild, The Scared, The Timid" single is something of a late discovery for NWOBHM enthusiasts, although it's unlikely to become a much sought-after item in the foreseeable future, even among most dedicated collectors. Actually, it's not a Heavy Metal record at all, let alone an undiscovered NWOBHM gem - we're pretty much in Progressive Rock territory here, so it's not like you'll get some insanely heavy assault if you ever get hold of a copy. And they don't look like headbangers with that bell-bottomed pants too! That said, I still think this humble 7'' has enough on musical grounds to warrant a quick review around here (not that this is much of an achievement, mind you).

The quintet was born in Wakefield, Yorkshire (UK), and the first hints of their existence date back from 1976, perfoming a handful of small gigs around this geographical area. Not much about them is known at present, but their one and only 7'' presents two pretty respectable numbers in a very proggy way, with some elements of 70s New Age (mostly on B-side "Traces of Impact") and a few pinches of Hard Rock to flavor the whole thing. The songs are carefully crafted and with some nice ideas too, the listening experience being fairly enjoyable as a result. "The WIld, The Scared, The Timid" is the better of the pair IMO, with a smooth instrumental opening leisurely developing as the vocals come in, turning into a intense, festive rocker towards the end. Keyboards and synths actually enhance the whole song rather than ruining it, which is always a thing to be admired, you know. Nice song indeed. 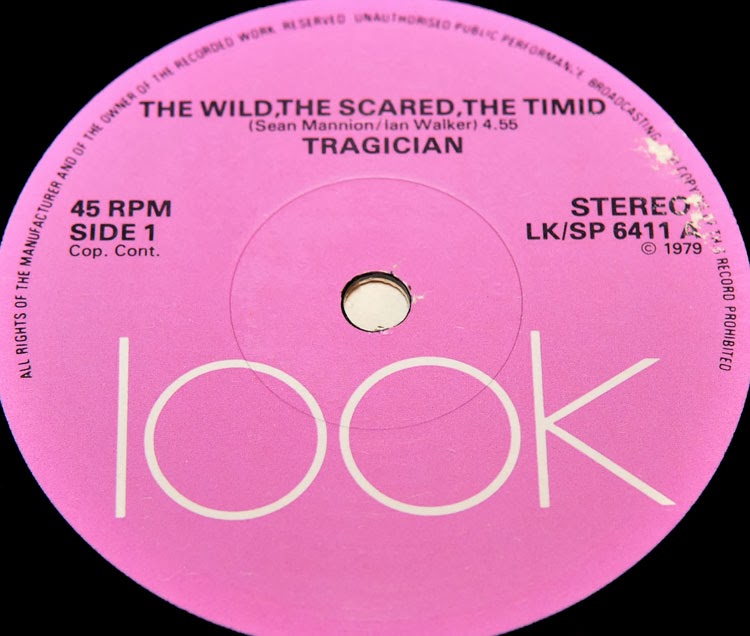 "Traces of Impact" is a more direct, upbeat number that swiflty metamorphoses into an atmospheric instrumental section with a lot of guitar solos. Not as interesting as the A-side, but it works well enough (although the hi-hat is very irritating, to be honest). The singer Sean Mannion does a good job all over here, and the instrumental side of things also can't be faulted, so I'm sure it's a single the most broad-minded among you could take a gamble with, if on sale for a reasonable price (or if a few mp3 files come your way, of course). The front cover is kinda ugly, but the single comes in a wrap-around picture sleeve with photos and lyrics, so there's not much reason for complaints.

It seems Tragician decided to call it a day more or less when the NWOBHM explosion really started taking shape, so perhaps the timing was somewhat unfortunate for them. Not that they could fit like a glove in the denim-and-leather mood of that times, but perhaps toughening their act a bit they could have found a wider audience and last for a while longer. None of the musicians seems to have resurfaced in any recording acts of note, and now we have only this humble piece of vinyl (limited to 500 copies, or so it seems) as a musical legacy. If you happen to find it cheaply enough, give it a safe place to call home, will you? And if you know more than myself about the band, please kindly get in touch, as I would love to learn more.

Million thanks to Vinyliciously for picture sleeve and label scans!

Have you been involved with any of the bands mentioned here? Have any extra info and/or corrections? Please e-mail me at drequon@gmail.com and let me know!
Postado por Drequon às 12:32 Nenhum comentário: 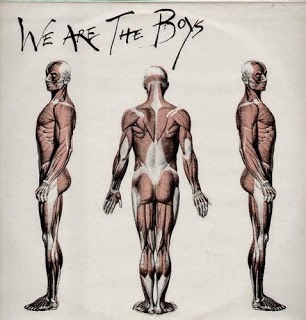 There are at least four recordings from Portsmouth's (UK) Shaftsbury known to exist. Apart from 1979's "The Lull Before the Storm" (already reviewed here), there are two undated vinyl releases (a single featuring "Hit Man" b/w "Crazy Jane" and LP "We are the Boys") and a very elusive live cassette called "On Demand", that seems to have been a self-financed affair meant to be sold at gigs. No one I know have such an item, unfortunately, so it's not beyond the realms of possibility that it was just a demo or a for-friends-only release, something that would explain its sheer scarcity. Whatever the story, the two slices of vinyl mentioned above are far more solid knowledge, although we still have to guess on what place each occupies on Shaftsbury's timeline. And both tell the same story: a band that walks away from the semi-progressive sounding of their most known record, keeping things simple and (specially on "We Are the Boys") making a move towards then-rising NWOBHM.

Let's start talking about the 7'' single, right? "Hit Man" is a good enough heavy rocker with nice guitar work in a Thin Lizzy vein and some well-intentioned (although slighty ineffective) vocal harmonies. It's not a very heavy song at all, but its structure is very competent and it's a reasonably catchy composition, so I guess it can make some NWOBHM completists happy. B-side "Crazy Jane" is nothing to write home about though: it's meant to sound like a live take from a talent show or something (and perhaps it is, who knows?), but this boogie-rocker fails to cause any major surprises, so I guess they would win no prizes for it. The brass arrangements towards the end are meant to liven up the song, but I guess they could have just chosen another song to use and it would surely work for the best. The general consensus of opinion is that this humble 7'' was released in 1980 or thereabouts, and I'll admit that it is a good bet indeed - but the more I think about it (not that I spend too much time thinking about it, you know) it seems less absurd that it could be from an earlier date, perhaps being edited even before "The Lull Before the Storm". Maybe someone close to the band can clarify this issue sometime in the near future, so if you happen to know for sure, please get in touch!

"We Are the Boys" LP is also undated, but I guess there can't be much doubt that it is a later offering from Shaftsbury, as the attempt to set the pace with the times (the NWOBHM of the early 80s, that is) is unmistakeable. I would say it is from 1982 at the very latest, but one can always be wrong about such things, you know. I personally listen to a good bit of Van Halen here (a strong influence for a lot of NWOBHM outfits, you know), and sometimes they even get close to real NWOBHM territory here (like "Travelling in Style", one of the best songs IMO), but most of the time it's more like good old rock and roll played with extra energy. Few songs here will remind us of the more progressive-inclined "The Lull Before the Storm" - the most interesting would be "Aftermath", a good display of songwriting skills and a nice keyboard atmosphere too - and there's a sensive lack of creative ideas around here, which is a bit disappointing to be honest. Songs like "Crazy", "Keep it Out", instrumental "B.P.M" (a "Hocus Pocus" kind of song, if you know what I mean) and the title track are not bad, but all lack creativity and confidence, being unconvincing as a result. There's some good stuff around here (the aforementioned "Aftermath" and "Travelling in Style", plus the interesting "Hot Rod Blues" and "Hurricane"), so it's not like it would be a completely unrewarding ride - but I guess they would have done better by sticking to what they did best, instead of trying to fit the mood of the times. But let's not be too harsh on them, right? They sure have their moments, and I sincerely like their music most of the time. 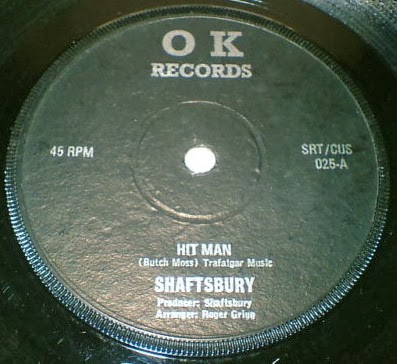 I'm not entirely sure of when Shaftsbury decided to call it a day, but it's reasonable to suppose they were no longer active at the mid-80s. That means they probably did their best for over a decade, which is a lot of time indeed - and I always tend to deeply admire enduring musicians who keep their dreams going for quite a long run. Incidentally, they seem to have reunited for a few low-key gigs at their native Portsmouth a few years ago, something that must be very eventful for the lads. I hope they received a good response, and I would sincerely love to know of any further developments. I suppose a full scale reunion is not on the cards, but I'm sure there are still some fans out there that would welcome their local heroes with open arms. A toast to that!

(if anyone have any hint on how to get their cassette-only live release "On Demand", please please PLEASE let me know, will you?) ^^

Have you been involved with any of the bands mentioned here? Have any extra info and/or corrections? Please e-mail me at drequon@gmail.com and let me know!
Postado por Drequon às 15:19 Nenhum comentário: