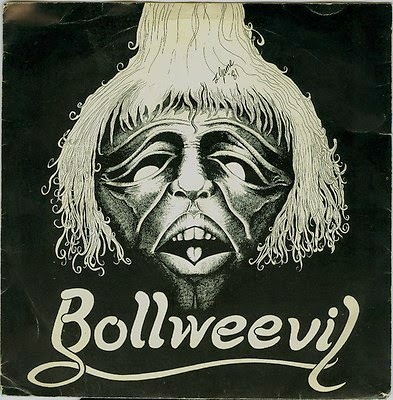 It took a remarkably short space of time for Bollweevil to leave a indelible (albeit belated) mark into the NWOBHM conscience. Most scholars agree that their collective existence was a very fleeting one, and the band's actual lifespan may have been limited to a single year in total, or even less. Still, the five-piece proposition from Surrey (UK) went as far as to record a couple tracks and release it as a 7'' single on the small-but-prolific Ellie Jay label. And this humble slice of vinyl (edited, as far as we know, in a very small run of a few hundred copies), though mostly ignored at the time of its release, would soon become a huge deal as soon as the NWOBHM collecting scene stablished itself in around the early 90s. Well, you all know the score from this point onwards: the "Rock Solid" single is a very rare gem that rarely comes out for sale, and it takes considerable amounts of moolah to get hold of a copy in playable condition. But is it that good, you ask me? Well, I guess everyone will have a different opinion, but I would say that the hype around it is mostly justified.

The song "Rock Solid" became something of a obscure classic for NWOBHM addicts, for both musical merits and razor-sharp irony. The production is pretty poor to be honest, with guitars seemingly plugged in a not-very-good home system and a snare drum that seriously sound like a pan - not to mention the very nasal singing of Barry Oaten, that sounds almost like a cartoon character in places. Surprisingly, such shortcomings are not enough to ruin the listening experience - quite the opposite actually, as they render the song in question even more light-hearted and funny. It's a very upbeat heavy rocker with nice guitar leads, ultra-catchy vocal lines and enthusiastic (though considerably brain-dead) lyrics about the pleasures of well, you know, rock 'n' rolling. You could listen to this track many times in a roll without ever get bored, which is quite an achievement when you keep things as simple as Bollweevil do. Flipside "Sands of Time" is a completely different kind of tune: it starts with a sedate, atmospheric intro soon metamorphosing into a mid-tempo, slightly epic composition with quite a forceful drive. Maybe not as memorable (and off-the-wall) as the A-side, but still a cool song in its own right, so it's fair to say Bollweevil's sole 7'' offers a very good return for any collector's money.

Despite being an interesting addition to the NWOBHM universe, it turned out to be a one-off. No further recordings from Bollweevil were ever unearthed (which tends to suggest this was their only visit to a studio) and there's virtually no mention to live appearances at any stage. I guess it's reasonable to think the lads played a few small-club gigs, but they probably never put that much effort into promoting themselves, opting to disband not long after "Rock Solid" hit the shops and swiftly returning to their day jobs. Not surprisingly, no one really know what happened to the guys since Bollweevil became history. Some have hinted that guitarist Steve Spencer hooked up with some indie rock outfits in the mid 80s, included an act called Jeda, but the axeman's name is such a common one that we need some further evidence before taking it as a fact. As usual, any further info on Bollweevil would be greatly appreciated, so if you happen to know anything, please kindly get in touch :)

Have you been involved with any of the bands mentioned here? Have any extra info and/or corrections? Please e-mail me at drequon@gmail.com and let me know!
Postado por Drequon às 14:52 Nenhum comentário: Many dedicated NWOBHM collectors are probably well familiar with Janine, a slightly glam-oriented outfit that released quite a well regarded 7'' called "Crazy On You" (or "Crazy Onion", as some sarcastic listener once pointed out to me in quite a memorable way) before disbanding by early 1982. It wasn't the end of the line for the musicians involved though, and most of them kept their careers going at least for a while. Janine's singer Bob Hamilton, for instance, established a new band called Garbo, keeping the mike stand and also accumulating guitar duties. His old chap Andy Steele (who also took part in Janine for a while) took over the drumstool, and bassist Billy Colvin (another old friend of Hamilton, both formely associated with a youthful act called Necromancer) swiftly joined in, the trio becoming what was soon to be know as Garbo.

What comes next is not exactly a sucessful story - Garbo seemingly lasted for little more than a year with such a moniker - but at least they managed to release an EP to forever remind us of the band's existence. Released by the small Rarn label at the second half of 1982, "The Dancing Strange" is a considerably adventurous record, filled with quirky ideas and a laudable leaning towards experimentation. Actually, I must make it clear that we're not dealing with a pure-blood heavy metal record: Garbo seems to be way more comfortable as a glam rock outfit (the front cover tells no lies, you know) with generous synth rock influences - not the heaviest music you'll ever hear, but still close enough to fit the ever-expanding NWOBHM multiverse. 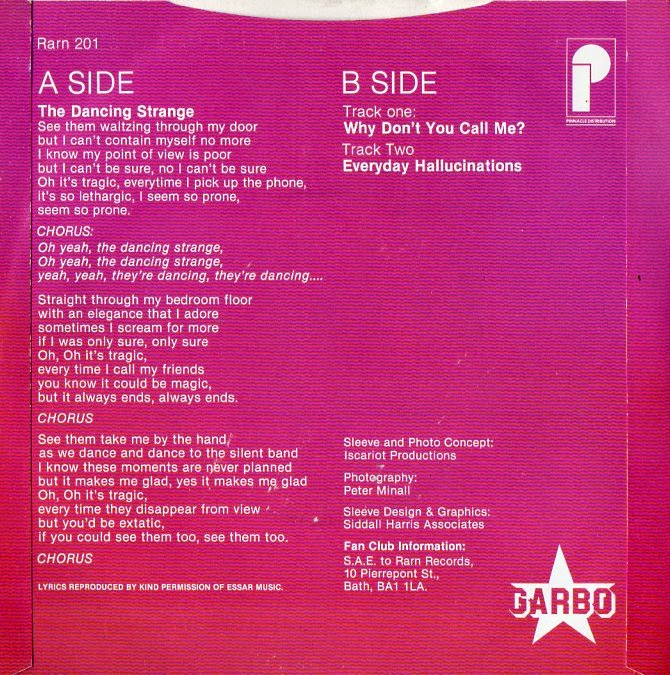 The title track is a semi-acoustic number with very creative arrangements and catchy backing vocals. The slightly atmospheric middle section breaks the mood quite efficiently while not overstaying its welcome, and it's another highlight on a pretty interesting song. Nice tune indeed. The other remaining songs are not that effective, I think, but are still within the required standards. "Why Don't You Call Me?" is the most unusual when it comes to song structure, and perhaps its many different parts are a bit too much for such a short track (little more than two minutes in total), as it does sound a bit confuse at first. It grows on you after repeated listens, but I would still consider it to be the less accomplished composition here, although far from being really objectionable. "Everyday Hallucinations" brings another simple-and-catchy chorus to the table (Bob Hamilton seems to have been quite good writing choruses BTW, as it was also a highlight in Janine), and it's perhaps the closer we'll get to heavy metal waters around here, though it's more of a Marc-Bolan-meets-The-Damned kind of tune. The bridge to the chorus could be a bit less freakish (the unpredictable can sometimes be a song's undoing, as we all know), but it's a song that sticks to your mind with little effort, so it's sure way more a triumph rather than a flop.

It seems Garbo went under such a name until 1983 at the very latest, then assuming a new identity as Vis a Vis and writing new material more attuned with indie rock than anything more forceful or metallic. Remarkably, Bob Hamilton and Billy Colvin remained a musical force at least until the early 90s and possibly beyond, both being active at the small-club circuit up to this day. It's heartwarming to learn that some talented musicians out there just never give up playing rock, as sometimes people are too focused on pursuiting fame and money and forget that it's all supposed to be fun after all. I'll drink to that. Thanks for all the music, lads. 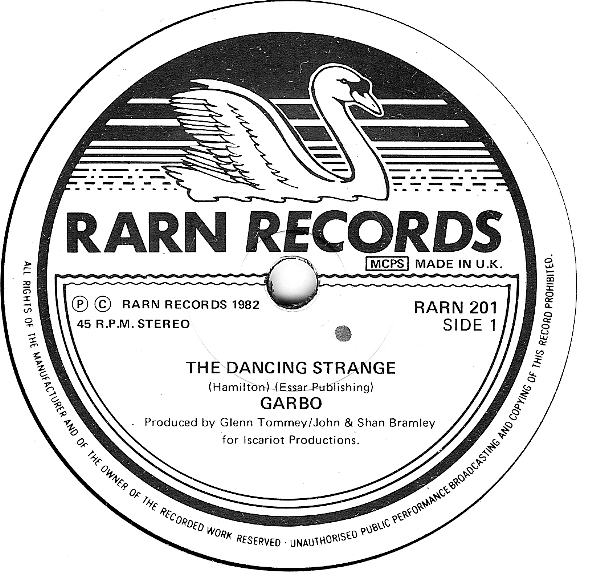 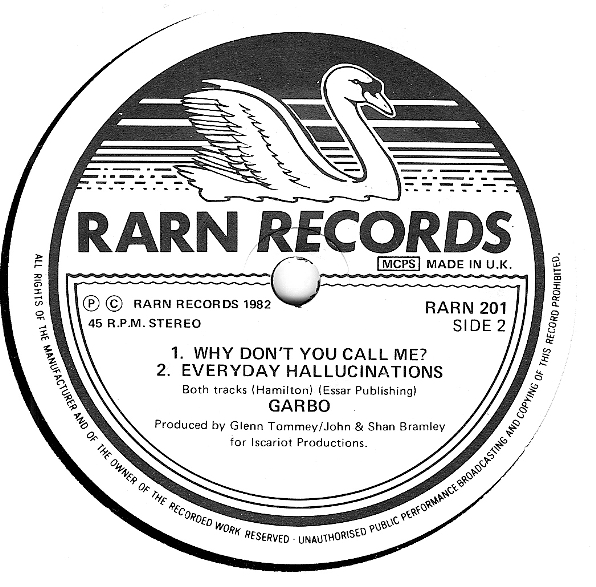 01. The Dancing Strange
02. Why Don't You Call Me?
03. Everyday Hallucinations

Thanks a ton to Heavy Metal Rarities Forum for audio files and picture scans!

Have you been involved with any of the bands mentioned here? Have any extra info and/or corrections? Please e-mail me at drequon@gmail.com and let me know!
Postado por Drequon às 16:51 Nenhum comentário: 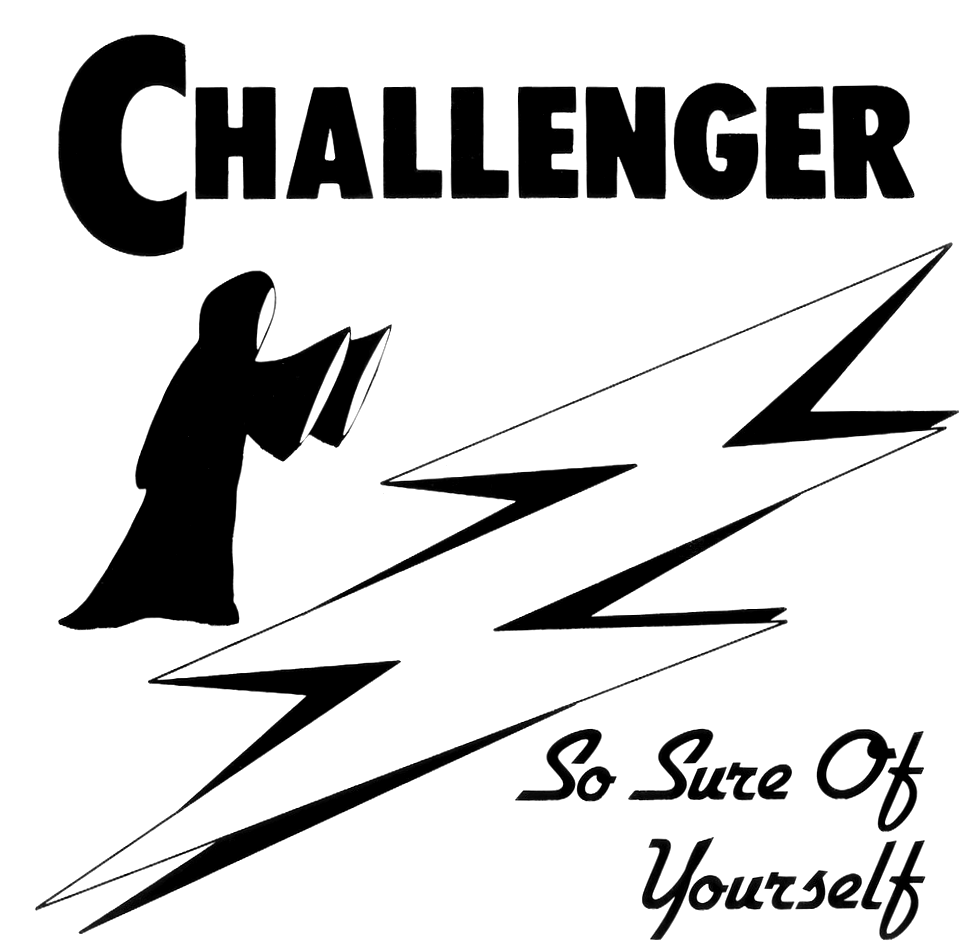 This little NWOBHM artifact, though not horrendously obscure, is far from being widely acknowledged as a worthy inclusion to the ranks of the movement. Still, I must say I like it quite a lot, and it's too bad these lads from Yorkshire (UK) - whoever they were, as I'm not really enlightened about that at present -  didn't manage to release further singles, as "So Sure of Yourself" (b/w "Out to Kill") presents many promising features.

Seemingly the main focus of attention, "So Sure of Yourself" is a classic rock number with reasonably catchy vocal lines (delivered with a very healthy level of finesse BTW) and a drive not dissimilar to Uriah Heep's "Look at Yourself" (a huge influence here, by the look of things), though the keyboards remind me more of The Doors to be frank. Not the most skull-crushingly metallic song you'll ever listen to in your life, but it's a very pleasant tune with decent instrumentation that will sure appeal to those who have nothing against some classic heavy/rock from time to time. Flipside "Out to Kill" is the most metallic of the pair, with atmospheric arrangements and slightly more prominent guitar work, not to mention far more thoughtful lyrics. Norman Lee Ward seems to have been quite a gifted singer, and the keyboards from Peter Whitford are very creative, going from the gloomy to the almost enthusiastic with interesting results. The production doesn't help matters though, as it takes all heaviness out of the compositions - such a shame really, as I'm sure that specially "Out to Kill" would benefit from a more metal-oriented outlook. 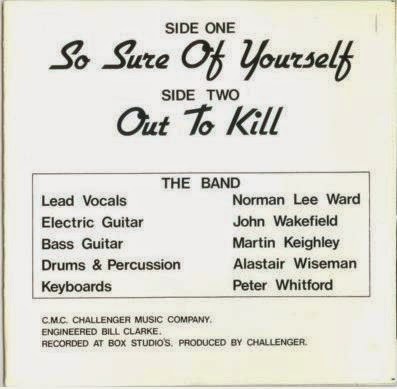 It has been hinted for a while that Challenger would be something of an offshot band, the musicians involved using soubriquets so to conceal their actual identities, supposedly due to their not-remotely-metal musical origins or something. I would not rule out such a possibility, but I don't think it's a very convincing one, though there's precisely zero tangible information regarding any of the musicians involved. Maybe they were just a youthful bunch who never took things that seriously and retreated to the 9-to-5 world not long after their sole vinyl release hit the shops. Whatever the story, I would surely love to know more, as I happen to enjoy the scarce musical legacy from Challenger. If you have any first-person accounts to offer, please kindly get in touch, will you?

Have you been involved with any of the bands mentioned here? Have any extra info and/or corrections? Please e-mail me at drequon@gmail.com and let me know!
Postado por Drequon às 15:01 Nenhum comentário: