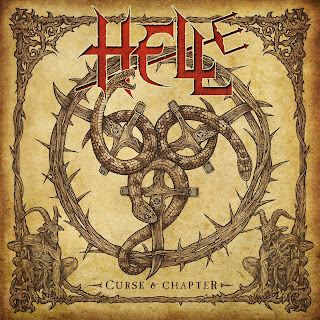 It's great to witness everything that is happening to Nottinghamshire's (UK) Hell since they reformed in the later part of the previous decade. They were one of the most original and unique bands in the entire England at the time, and the fact that they never went to release at least one full album of their own was hugely unfair, if you ask me. It took a while to make them justice, but they sure came back with a vengeance, releasing the immensely good "Human Remains" in 2011 - an album that completely changed Hell's status indeed: from an old and near-forgotten curiosity from the basements of NWOBHM, they turned into serious contenders in today's Heavy Metal scene - no nostalgia going on here, believe me! Such was the impact of Hell's comeback that the follow-up to "Human Remains" caused a thinly disguised expectation in the whole HM community - which is not only fair, but also awesome to behold. And none of us will be left down, as "Curse and Chapter" is a champion in its own right, an album sure to raise thousands of horns and set countless necks in motion in no uncertain terms.

The first question you all will ask me is very predictable: is this new CD as good as "Human Remains"? Most reviews I read so far state that "Curse and Chapter" is even better, but I politely beg to differ, as I think "Human Remains" still shows Hell at its best - although by a very close call, you know. But oh well, I used to be a fan when there was only the old demos with Dave Halliday doing the rounds in MP3 format, in a time when any reunion would be deemed impossible, so perhaps there's a bit of romantic bias on my judgement here. And please don't get me wrong here: I already listened in full to "Curse and Chapter" dozens of times and I just can't get enough, as it is indeed a damn good album of the highest calibre. But there's some perceivable differences going on when you compare one album with the other, so please let me explain what I mean.

While "Human Remains" was (quite predictably) 100% made of old songs, "Curse and Chapter" is a 50/50 affair, with an even (and quite understandable) mix of old and new. I'm not implying that the new stuff is not that good, readers take note (that's not the case really, as I'll explain below), but they are a bit different from what Hell use to be - most of all, they are considerably more linear in their construction, lacking that unexpected twists and turns that (for me at last) are a huge part of Hell's musical impact. Songs like "The Age of Nefarious" (a sardonic pun on the "Age of Acquarius", in case you didn't notice), "Something Wicked This Way Comes" and "Faith Will Fall" are all great, but they're not really surprising, you know - they'll make any self-respectful headbanger happy, that's for sure, but they won't give you that OMFG-what-the-fuck-they-just-did-this-is-awesome-!!! feeling, if you know what I mean. Compare it with the insane tempo and key changes in "The Disposer Supreme", for instance, and perhaps you'll get my point here.

I wouldn't even say that it's indeed a problem of any kind - perhaps it's just an option, and old songs here included (such as "Land of the Living Dead") are also more direct and less unpredictable, so it's not like there's anything wrong with that. But I think "Human Remains" was a bit more original and unique, and that's why "Curse and Chapter" will get a 4-star rating in the end. You're free to disagree as much as you like, you know.

And let's make it clear once again, in case you're still not sure: "Curse and Chapter" is a damn great album in its own right. The old and new dialogue quite efficiently throughout the CD, making the listening experience an intense, powerful and absorbing ride, just like "Human Remains" before it - Hell being one of the few band that still make long-play records a justified endeavour these days. The new versions for songs like the aforementioned "Land of the Living Dead" and "The Disposer Supreme" (a true Metal nightmare of epic proportions, one of the finest moments in Hell's career so far) are no less than brilliant, and the sense of pure scorn in "Deliver Us from Evil" would surely make Dave Halliday very proud. I was surprised with the inclusion of "Harbinger of Death" (a song from Halliday's previous band Race Against Time that I'm not sure if ever really made part of Hell's early repertoire), but it also works to great effect here - and the partial inclusion of "Intense is the Sense of Doom" at the end of it made me smile, as I always loved this old gem from Hell's back catalogue. Even the reworking of instrumental piece "Deathsquad" is quite enjoyable. 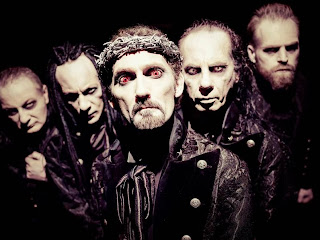 Of the new compositions, the undeniable highlight goes to "Darkhangel" - a grandiose, impressive epic on Aleister Crowley's failed attempt to evoke Pan, one of the most enduring legends of the occult underground (or mainstream, I'm not quite sure). The singing of David Bower is top-notch here: threatening, spellbinding, full of confidence and power. Outstanding. I also like "End Ov Days" - it's one of the most impressive displays from guitarrists Kev Bower and Andy Sneap, and the chorus is really strong, to say the least. "A Vespertine Legacy" is the most complex of the new compositions, and it's a good one, although my least favorite in the entire album - maybe it's because everything else is so awesome, who knows? But bassist Tony Speakman have his chance to shine, and Tim Bowler (a drummer whose talent is never properly acknowledged, if you ask me) also reveal some of his tricks here and there.

Now there's an interesting challenge waiting for Hell in the not-too-distant future, as I guess they will have to write a full set of songs if they ever release a third CD (a very strong possibility, by the look of things). The vaults are almost completely exhausted by now (and I have a distinct feeling they will never record new versions for "Dephts of Despair" or "Judas", you know) and it will put Hell under a whole different pressure, as they will no longer be able to rely on old stuff to keep their musical personality. And do they have anything to fear, you ask me? Sincerely, I don't think so - they are now stronger than ever, with two extremely good albums under their belts, a rapidly-growing fan base and a kick-ass stage show I would really love to behold (maybe someday, who knows?). It's a band of today, not a nostalgia act from the past - and they rule in the world of today like few bands can. I'm sure they will be fine. Long may Hell be upon this Earth - I'm enjoying every bloody minute of it, no regrets.

Have you been involved with any of the bands mentioned here? Have any extra info and/or corrections? Please e-mail me at drequon@gmail.com and let me know!
Postado por Drequon às 16:14 Nenhum comentário: