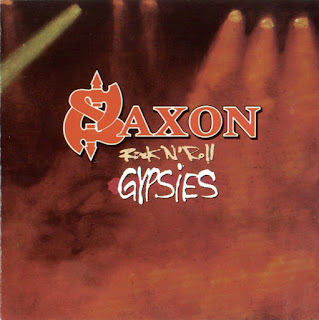 Things looked grim on the Saxon front back in 1989: more than a critical and commercial failure, "Destiny" was a hard blow to the band's reputation within the metal community, and the consensus of opinion seemed to be that Biff Byford and his cohorts had little else to do than taking a long (perhaps permanent) vacation from the music scene before things get even more disastrous to their cause. When both Paul Johnson and Nigel Durham parted ways with the venture in the second half of 1988, there was a tangible feeling that Saxon were doomed to drift apart in no time. But the remaining trio of Byford, Quinn and Oliver decided they haven't had enough just yet, and vowed to keep things going for a while longer. Old buddy Nigel Glockler agreed to lend his friends a hand, and with then-unknown Nibbs Carter assuming bass duties, the lads just put on their bravest faces and headed straight into the live environment where they always felt more at home. It would be a long way back to the top if they wanted to rock and roll, you know, but there seemed to be well enough demand to justify a few jaunts - and, once the Roadrunner label agreed to sign a one-off deal with the lads, a small tour in Hungary in late 1988 was duly immortalised as "Rock 'n' Roll Gypsies", the second live instalment in their career.

Far from the pretentious (and, at the time of its release, perfectly justified) atmosphere surrounding their earlier live opus "The Eagle Has Landed", this LP is stripped-down in every sense, with pretty modest presentation and good enough (but hardly impressive) production values. No photos from the band on the original package, and they didn't even try to give the record a more seamless live feel by removing the fade-ins and fade-outs in between tracks. It's only a few stairs higher in quality than a very accomplished bootleg would be, but I don't think it's too much of a problem, you see: actually, it gives the record an unpolished, straight-to-the-point vibe which is a pleasant change after the sugar-coated textures on albums like "Innocence is No Excuse" and "Destiny", to name a few. It was more by chance than design though, as I seriously doubt Saxon would have drawn plans for a prodigal-son-style return to their roots at such an early stage (let's face it, the sole purpose of this release was trying to keep their heads above water, that's all).

Considering it was nowhere near a triumphant era in Saxon's career, it should come as no surprise to verify that "Rock 'n' Roll Gyspies" is a bumpy ride most of the time. It opens with a surprisingly tepid version of "Power and the Glory", then immediately recovers its strenght with a sterling take on "And the Bands Played On", which I guess is clear enough an indication that one must be ready for anything while listening to this album. The repertoire is hardly exciting as a whole though, as I suspect only the most die-hard fans of the group will be falling over themselves to hear unspectacular live renditions of "Northern Lady", "Battle Cry", "Just Let Me Rock", "I Can't Wait Anymore" and so on. Some later-period tunes fare better, admitedly, like "Broken Heroes" (I love this one, really) and "Rock the Nations" (not a world-beater by any stretch, but it sounds far more engaging than the dull studio version), but there are far too many glaring absences around here to make it a must-buy. That said, you can still hear in tunes like "Dallas 1 PM" and "The Eagle Has Landed" much of the fire that made Saxon such a household name in the past, so it may have been heart-warming for some fans to find out there was still some heavy metal blood running through Saxon's veins after all.

In retrospect, "Rock 'n' Roll Gypsies" hardly made a difference on the band's fortunes, and I seriously doubt it sold enough units to have any record labels beating a path to their door, you know. It was more a case of not fading out of the public eye, and at least it sent a message to promoters that Saxon was still on the road and willing to play wherever a crowd would have them. Since any hopes of achieving mainstream success were forever gone after the "Destiny" fiasco, and with most long-haired metalheads still keeping safe distance just in case some dreaded keyboards were lurking around the corner, Saxon could hardly wish for more. You don't really need this one in your collection unless you're a completist, but don't be too afraid to give it a chance if you spot it in the bargain bins of your local record store. 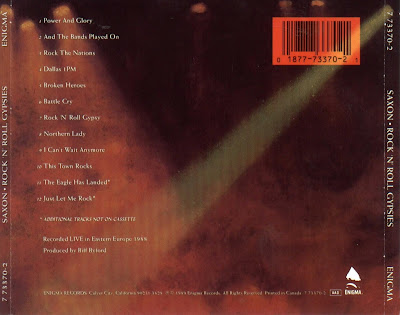 Have you been involved with any of the bands mentioned here? Have any extra info and/or corrections? Please e-mail me at drequon@gmail.com and let me know!
Postado por Drequon às 20:30