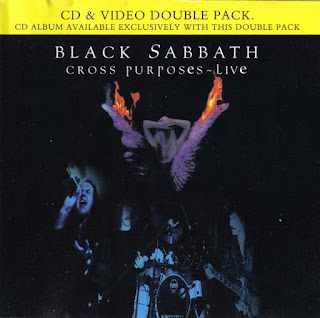 After creating quite a buzz around themselves by sharing a stage with Ozzy Osbourne on the two final dates of his "No More Tours" (oh yeah, who would have guessed), Black Sabbath managed to confuse everyone by reuniting with the other ex-singer instead, namely Tony Martin. I guess everyone involved kinda knew it was bound to fail from the start, since not a single metalhead on Earth would be reasonably inclined to say "cool, Martin is even better than the Madman himself, I'll take him" and so on. Still, I respect them for trying, and "Cross Purposes" have its moments, you know - though such a reasoning will hardly justify the release of "Cross Purposes Live", a filler if there ever was one, a live CD-plus-VHS package that makes little sense into the band's discography, and is also far from capturing the group in the best possible light. Live albums and Black Sabbath are dangerous when put together, as I once said.

The sound quality is mostly pretty decent, and the mixing is perhaps the best a live Sabbath album received up to this point, with all instruments clear and balanced all through the CD - you can even hear the keys from good old Geoff Nicholls on a number of tracks! The repertoire is also interesting enough, with a good mixture of old classics and recent compositions, adding some unexpected curios in to make things even more appealing. It would therefore be silly to dismiss this record as a toxic waste you should avoid like the plague, as it holds enough features to make it at least remotely interesting. But a live album is about delivering the goods, you know - it is supposed to sound tight and powerful, to grab you by the neck and make you feel like being right there, singing and cheering and sweating and having a good time. And there is precisely where "Cross Purposes Live" falls flat, I'm afraid.

I don't want to be rude on Tony Martin, mind you, as I really like the man and I know how ridiculed his live performances used to be back in the day, so I'd rather keep such cruel ironies aside. But the ugly truth is too clear to be ignored: his singing is mostly below average here, with few redeeming moments to be found. Let's take "I Witness" and "Psychophobia" as examples: two of the best songs out of "Cross Purposes", both with an intense drive that should work like a charm in the live environment, and Martin almost single-handedly ruins everything with shallow, unconvincing performances. It's quite intriguing and somewhat disturbing in fact, like he just couldn't bring himself to make these songs justice upon a stage, and roughly the same can be said about many cuts around here. 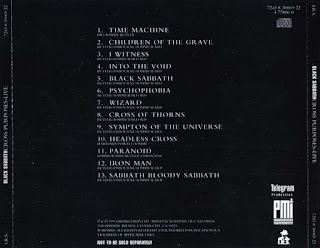 I have this pet theory about "Black Sabbath" the song, you know: it's actually pretty easy to sing it, but once you overdo it, you're heading straight into disaster with no chance for lucky escapes. Unfortunately, I more than often use Tony Martin's performance here, along with what Ronnie James Dio did on "Live Evil", as one of my primary examples. C'mon man, just go there and sing it, drop all these dreadful oooohs and yeahs and ha-ha-has for Satan's sake. Granted, you're singing about the Devil, but that doesn't require you to make a pitiful parody of the Fallen Angel itself, you see. Most of Osbourne-era songs are similarly flawed (don't get me started on "Children of the Grave", please), and Martin's voice even fails miserably on "Symptom of the Universe" and "Cross of Thorns", which is the exact kind of shortcoming overdubs were developed to correct, so I really can't understand why nobody bothered to make a few corrections in places. But then you must direct the spotlight to the other guys as well: Bobby Rondinelli commands a very effective performance throughout, easily the highlight on this CD, but both Iommi and Butler sound a bit too restrained if you ask me, like they're simply getting the job done and not much else.

Not that everything is pain and dread on "Cross Purposes Live", you see. "The Wizard" is actually quite cool and a song they hadn't played in ages, and it gets you thinking how different things could have been with a more careful approach to the setlist (and oh yeah, Martin sings it beautifully too). "Headless Cross" and "Into the Void" are also OK, and the simple fact that they played "Sabbath Bloody Sabbath" in its entirely (not the edited or main-riff-only versions done in later years) is also something of a highlight. It's unfortunate that some of the best songs that night, like "Anno Mundi" and "The Mob Rules", never made it into the CD, being restricted to the home video format. Not like you're being deprived of anything extraordinary, mind you, but the final product would be of a considerable higher calibre with these inclusions. On the other hand, omitting "Neon Knights" was probably the right move, if you ask me.

Recorded little more than two months into the tour, "Cross Purposes Live" would be released only over a year later, when the line-up responsible for it were already history. Bobby Rondinelli was the first to jump ship, and he was even substituted by none other than Bill Ward himself for a handful of shows in South America (not the best performances the band ever delivered, to be frank, so it's not like you should bother trying to locate rare bootlegs or anything). After fulfilling all touring obligations, Geezer Butler finally got enough as well, and the split seems to have left a sour taste in his mouth at first, as some lyrics for his G//Z/R solo project will be well enough to demonstrate (more on this in the not-too-distant future, I hope). It seems that Tony Iommi was really into reunions at this point, as he took the opportunity to bring both Cozy Powell and Neil Murray back, effectively reuniting the line-up responsible for "Tyr" five years previously - not the comeback the fans were fervently expecting I guess, but there you go. As a memento of this very brief period in the band's existence, "Cross Purposes Live" may be of some interest for completists, the only ones likely to spend time and money trying to locate this long out-of-print package; on the other hand, the rest of us can rest assured our lives won't be at all incomplete by failing to buy a copy. 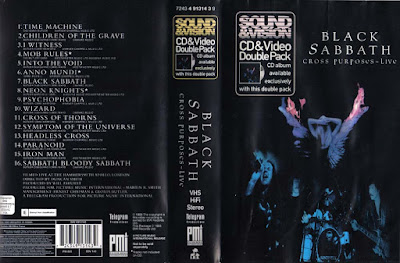 Special thanks to Tapio's Home Page for the awesome picture scans!

Have you been involved with any of the bands mentioned here? Have any extra info and/or corrections? Please e-mail me at drequon@gmail.com and let me know!
Postado por Drequon às 08:15