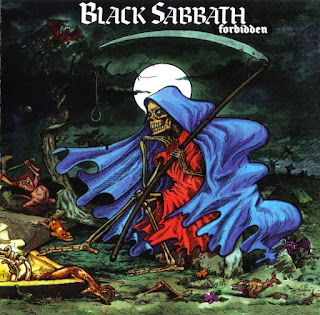 Let’s start this review by giving Mr. Tony Iommi a deal of credit where is due: to keep Black Sabbath as a living entity for the best part of three decades, the axeman had to weather the worse out of many storms, and still he made a reasonably good job of it most of the time. He sure had to hear a lot of reproaching through the years (from all the other original members, for instance), but the man would just move on with a brave face, facing all adversities album after album, tour after tour. I respect him for that, you see. But sometimes you just drop the ball, and that’s exactly what happened on “Forbidden”. Not only the poorest studio release from their entire discography, it’s also the portrait of a band without a soul, a project that was incongruent to such an extent that no one really knew what to make of it, incluiding the band members themselves.

To fill the blanks left when Bobby Rondinelli and Geezer Butler jumped ship in 1994, Iommi convinced both Cozy Powell and Neil Murray to return, effectively reuniting the line-up responsible for “Tyr” back in 1990. It was a very commendable sign of loyalty, and it shows just how fond of that not-really-successful album the mainman was, but it’s hardly what the fans were expecting to hear – and it even gets uncanningly close to unintentional humour when you consider that Iommi masterminded this low-profile reunion in a time when everyone was hoping for the other reunion, with Ozzy Osbourne on the mike stand. Overwhelmed by professional obligations elsewhere, both Powell and Murray had very little input during the rushed songwriting process, while the trio of Tony Iommi, Tony Martin and Geoff Nicholls found themselves struggling to come up with usable ideas. And things went from bad to worse when someone came with the idea of injecting new life into Sabbath’s sound by asking the guidance of some guys from rap metal outfit Body Count…

See, it’s not that I hate Body Count’s music at all (I actually enjoyed some of their earlier songs when it came out, to be honest), it’s just that the whole idea was pointless from the start, like asking Freddie Mercury to produce a Bob Dylan album or something. Opening track “The Illusion of Power”, presenting Ice-T as co-writer and guest singer, is one of the least accomplished tunes Black Sabbath ever recorded, a mishmash of doomy riffing with inane, misanthropic lyrics, semi-rap singing by Tony Martin (seriously) and a pretty annoying chorus – not to mention the growling voice of Satan himself at the end, perhaps taken straight from a 1990’s low-budget horror movie! And it sounds even worse with the completely wrong approach Ernie C brought into the production, with a uncaring, one-take-and-that’s-it attitude that made the record sound shoddy and thin, the glaring disregard for the drums being a special low point – seriously man, it was goddamn Cozy Powell playing there, he sure deserved a better capture and mix. “Rusty Angels” is particularly atrocious, as some of its more delicate melodies are muddied beyond recognition and the guitar solo seems utterly out of place, like it was lifted from another song and just thrown in to make the numbers. It sounds downright awful, and it’s such a shame really, as this is one of the least questionable tunes on a very poor batch of compositions, and perhaps would provide a pleasant listen under different circumstances.

Oh well, “Get a Grip” is OK I guess: though the main riff is lifted from “Zero the Hero” (once again, BTW), it’s a mostly engaging composition with a charming chorus, and the speed-up towards the end is perhaps the only chance Cozy Powell gets to roll up his sleeves and put his magic drumsticks to good use. “Sick and Tired” is also decent, a bluesy tune that wouldn’t be out of place on a Whitesnake album, with nice vocals from Martin and a pretty cool solo. But those are but drops in an ocean of mediocrity and ill-conceived ideas, really: “Shaking Off the Chains” is no less than a bloody mess, while “I Won’t Cry for You” is a very weak attempt to write a power ballad and “Can’t Get Close Enough” tries to be an emotional mid-tempo rocker, but only manages to be downright annoying, I’m afraid. Songs like “Guilty as Hell” and “Kiss of Death” are not outrageously bad or anything, but suffer from a distinct lack of imagination, and the title track is such a poor rehashing of worn-out, allegedly forceful ideas that I’d rather forget it even exist, if you don’t mind.

Everything on “Forbidden” sounds half-hearted and rushed, like everyone involved just wanted to get rid of the damn thing as fast as they could, and that’s exactly what happened right after its release. After just a few months of touring (with Bobby Rondinelli lending a hand on drums towards the end, as Cozy Powell made an extended leave citing health issues), Tony Iommi unceremoniously disbanded the whole affair, mentioning his plans to record a solo CD. As we all know by now, the reunion with Ozzy Osbourne was also long in the works, and it would finally come to fruition in 1997, not before an album’s worth of Iommi’s solo material was recorded (and later shelved). As for “Forbidden”, nearly all musicians involved ripped it to shreds in later years, so I don’t feel we should contradict them by implying it’s any sort of underrated classic, you know.   Tony Iommi has long stated his intention to remaster the whole thing, and perhaps a better sound could highlight some minor merits hidden beneath the grooves, but make no mistake: “Forbidden” is a very poor release, the worst Sabbath album with little room for a doubt, and its redeeming features are too scarse to change this status.