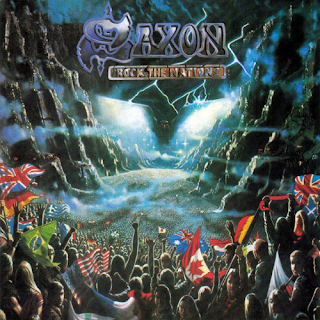 Previous record "Innocence is No Excuse" sold well enough copies to keep Saxon in the public eye, but, for a band clearly determined to crack the USA market once and for all, "well enough" was far less than the amount required, you know. For the very first time since their efforts to conquer America became evident, old fans in England and elsewhere were giving up on the band in large numbers, estranged by the increasingly fabricated sound and looks of their once-reliable metal heroes. Adding to an already hazardous situation, bassist Steve "Dobby" Dawson was given his freedom by early 1986, with the usual "irreconcilable differences" being mentioned and all that. As it transpires, though not overtly opposed to the direction the band were taking, Steve strongly criticised some of his colleagues (and management's) choices, most of all the presence of much-travelled Gary Lyons as the band's next producer - not that the bassist wanted someone with a lower profile, but there was a strong rumour going around regarding Lyons to have suffered a serious and work-incapacitating loss of hearing through the years, if you know what I mean. "This was being Spinal Tap for real", Dawson stated in a later interview, and Saxon being a confessed inspiration for the movie, you should take his word for it.

Wherever the truth lies, fact is that Dobby was one of the key songwriters in Saxon, and his sudden absence only further emphasized the glaring lack of usable ideas inside the group. Biff Byford played bass for the recording of "Rock the Nations", though the album credits were given to Paul Johnson, who stepped in for touring purposes and only after the recording process was over. It was a homemade sollution and it surely made things easier in the short term, but I'm afraid it also resulted in a less imaginative collection of songs, as there were less people trying to think outside the box.

There is one element that is often ignored on most analysis about Saxon's gradual decadence: the huge toll of the endless grind of touring and recording, touring and recording over and over again. In fact, if we were to resume "Rock the Nations" on a single word, I would say that it is an LP that sounds tired, from start to finish. From the very first notes of the supposedly anthemic, but actually kinda dull title-track to the unfocused, unconvincing emotional leanings of final ballad "Northern Lady", Saxon sounds like putting up with a arduous wednesday shift work and all they could look forward to is to go home, sink on the couch and crack a beer. The fire is nearly gone, and most songs just churn out some well-worn formulas without any sense of conviction, any snippet of a thing to say. It would be unfair to say they couldn't care less, but it's unmistakeable that the lads are not having that much fun at all - and, to a band that became famous for being lively, in-your-face and funny, leaving such an impression is no less than a disgrace.

Some have said "Rock the Nations" is something of an attempt to recapture their former strenght, as the production sounds a bit more direct and the guitars are somewhat sharper than on previous releases. Saying that Gary Lyons was unable to hear a guitar tone to save his life was clearly evil-speaking, as most things sound pretty much in place around here. But it's far from a considered move IMO, this metal-by-the-numbers sound being the kind of a result you could get by simply doing your homework without giving much of a though about it. After putting a lot of effort on being palatable for the mainstream charts, Saxon now only seemed willing to get the job done on schedule - not that they had left all hopes to conquer America coast to coast behind just yet, you know, as the aforementioned "Northern Lady" and the truly godawful "You Ain't No Angel" offer too clear an indication to be ignored. And it sounds completely wrong, as one would expect: it's not only that Saxon should not be writing such tunes, it's also that they sound noticeably incompetent while doing so. Second-rate glam/sleazy metal bands like Cinderella and Faster Pussycat would most probably reject such poor compositions.

Elsewhere, unimaginative metal tunes like "Running Hot", "We Came Here to Rock" and "Empty Promises" may not induce any permanent trauma to less demanding listeners, but are so damn clichéd and redundant that you're unlikely to listen to it more than once in a blue moon. "Waiting for the Night" is a bit more charming perhaps, but still nothing to write home about. You see, when an immensely average song like "Battle Cry" is probably the best of the lot, you can be sure we're not heading for a very pleasant ride at all. "Party 'til You Puke", featuring none other than bloody famous Elton John on piano (he was recording his own songs right next door, you know), is perhaps the most fitting summary of the album's shortcomings: it's supposed to be a well-intentioned excuse for a jolly good laugh, but it fails miserably to be funny if you ask me, sounding more like a three-and-a-half-minute sketch gone wrong. Considering that "Rock the Nations" is a 40-minute exercise on metal futility, it kinda makes sense in the end.

Saxon used to have such a high profile amongst the metal community than even this dismal LP wasn't enough to rip their reputation to shreds just yet, the band being still capable to book more than enough shows for a successful tour, even headlining 1986's Reading Festival in front of a mostly appreciative crowd. Still, the downward spiral was way too evident to be ignored, and EMI made ominously clear that the next record had become a make-or-break for the lads. The band got out on vacation for most of 1987, trying to invigorate themselves and start afresh on an album that would hopefully put their career back on track. What they came up with was "Destiny", a record still remembered to this day for all the wrong reasons. I understand that giving a single star to "Rock the Nations" may seem a bit harsh when compared to what would come next, but we still must point out the ugly truth: it's a very bad record, close to pathetic in places, and one that only die-hard completists should bother to obtain.

Have you been involved with any of the bands mentioned here? Have any extra info and/or corrections? Please e-mail me at drequon@gmail.com and let me know!
Postado por Drequon às 08:42