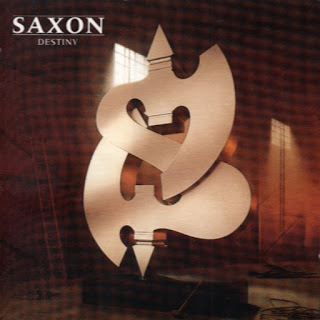 Everyone who ever heard "Rock the Nations" with an inquisitive mind will probably agree that it is downright awful, a shockingly inept and redundant record whose shortcomings are all the more appalling when you consider it was commited by none other than Saxon, once regarded as one of the most powerful stallions from the entire NWOBHM. They managed to salvage the situation to an extent, keeping the show on the road for the remainder of 1986 - with Nigel Durham joining the fun early in the following year, after namesake Nigel Glockler decided to move on to pastures new. Still, I guess the lads were all well aware that the writing was on the wall for them, and decided to took most of the following year away from the grind of touring and trying to create a more substantial batch of songs, as a last gasp to rekindle the fire and meet the non-negotiable demands from EMI. Give us a hit or we'll show you the door, I can almost hear the executives saying - and poor old Saxon, already labelled as dead meat by critics and witnessing their flock of fans desert by the thousands with every release, decided it was time to play the desperation card. No longer able to walk the thin line, and seeing no point in attempting a back-to-basics approach, the lads jumped straight into major sell-out - and "Destiny", the ugly child of such decision, will forever be there to haunt us in our sleep.

Now, let me be as clear and neutral as possible: "Destiny" is not that bad. I mean, it's downright bloody bad of course, but not as abhorrently bad as it probably seemed to be when it first came out in 1988. There were far worse coming out at roughly the same time (have you ever heard Uriah Heep's "Equator", for instance?), and I would even dare to say (oh help me god, I'm about to say it) that it's a better album than "Rock the Nations", at least on the songwriting side of things! I mean (calm down folks, let's put the torches aside, will you), where the previous record sounded like something a bot programmed to write hard/heavy tunes by chance would come up with, "Destiny" shows perceivable signs of a band  actually trying to achieve something, putting effort into creating songs that would make sense within themselves and sound coherent as a whole. They failed, damn sure they did, but the failure comes not by sheer incompetente, but mostly because the whole concept was doomed from the start.

"Ride Like the Wind", for instance. It was surely a non-starter; Saxon recording a cover version for a Christopher Cross' song, for God's sake. I'll be charitable and concede the quintet tried to make something a tad more forceful out of it, but just think about the scenario: Saxon, a bunch of troublemakers from England's working class, recycling a well-worn tune straight from the soft-rock-radio playlists in a time when everyone hoped them to do the right thing, to relive themselves with at least a nice heavy song or two. When it came out as a single and MTV videoclip, most of those still willing to buy the album saw the signs of approaching doom and promptly started running for their lives. Even worse was to come when the second single "I Can't Wait Anyone" was released a couple months later: let's face it, releasing a dreadful semi-ballad as heavy as a Bryan Adams' ripoff as an appetizer for your new LP is hardly the best strategy if you're a heavy metal band with a career at risk. When "Destiny" finally hit the shops in June 1988, only the bravest and most persevering fans were still willing to spend a dime on it - and those who actually did buy the album should have their names displayed on Saxon Loyal Fan's Hall of Fame, as the record itself hardly offered any solace to their ears.

The sound production is as sleek and faceless as it could possibly be, trying to metamorphose Saxon into an American pop metal outfit and depriving the band from any possible sense of personality in the process. Tunes like "Calm Before the Storm" (with heartfelt lyrics about Biff's recently deceased father, totally out of place in such an innofensive, metal-for-good-guys outlook), "Jericho Siren" and "Where the Lightning Strikes", that would perhaps be less questionable under different circumstances, are rendered nondescript and frankly annoying as a result. Worse is to come when the intrusive keyboards, not happy enough with coating the album's tunes on countless layers of sugar, decide to push the guitars aside and play the main riffs for "We Are Strong" and the abysmal ballad "Song for Emma"! C'mon guys, there was no way it could be a wise move! And things slide into unintentional humour with "S.O.S", a purportedly epic tune about Titanic (it even begins with Morse code, you know) that loses the listener as soon as the atrocious chorus starts and gets almost laughable in the instrumental segment, where guitar solos, keyboards and the rhythm section seem all to be playing entirely disparate songs all at the same time. A serious contender for worse song ever penned by Saxon, and I mean it from the bottom of my aching heart.

To be fair, a few minor highlights come in the shape of the pretty decent main riff in "For Whom the Bell Tolls" (but why they did such a mess with the chorus is beyond me) and most of all "Red Alert", which closes proceedings with a nice enough drive that is slightly enhanced by the keyboards (!) and with no harmonizing voices spoiling the chorus (!!!). Too little too late, I guess, and not remotely close in stature to all those outstanding triumphs of the past, but still the best song here by a long stretch, though the pointless outro should have been scrapped with no remorse from the final product. At least it's better than any song on "Rock the Nations" (yeah, kill me for this, I don't care). 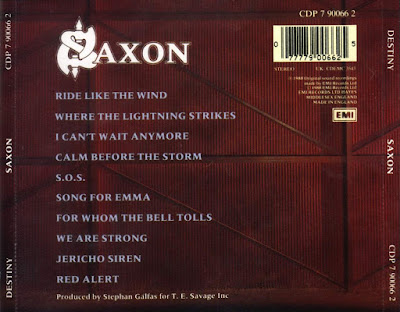 As stated above, "Destiny" was so immense a failure that even its release was something of an exercise in futility, as there was precisely zero hope of ever attaining significant sales figures with it. Unsurprisingly, EMI finally dropped the band as a result, and when Paul Johnson packed his bags in late 1988 there was even talk about the rest of the band giving up the ghost as well. But that was not to be, fortunately, as Biff Byford (now pretty much the leader of the pack) managed to convince the other guys to stay onboard and even lured Nigel Glockler back into the sinking ship, God knows how. It would take a lot of time and hard work for Saxon to recapture some of their former glory, but I promise the worse of the storm is behind us, we'll soon be sailing in full wind and it will be a far less distressing navigation from now on. As for "Destiny", I wholeheartedly advise you steer well clear of it, unless the idea of never owning a complete Saxon collection is too much for you to bear. It will mostly gather dust on your shelf for the decades to come, but c'mon, I'm a collector too, I know how it feels. At least they had the decency to keep most of the original logo out of the artwork, you know.

Have you been involved with any of the bands mentioned here? Have any extra info and/or corrections? Please e-mail me at drequon@gmail.com and let me know!
Postado por Drequon às 19:36