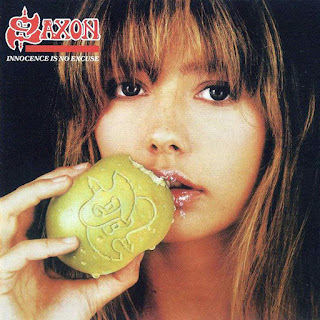 Though a commercially successful album that sold a healthy number of units at the time of its release, "Crusader" was something of a failure on artistic grounds, easily the least relevant release from Saxon's repertoire up to that point. The metamorphose was more and more evident with every record, their street-level reputation of former years patently being replaced by a more calculated, less dangerous - and therefore less appealing - outlook. While still unable to make it real big (something that NWOBHM rivals Def Leppard and Iron Maiden, on entirely disparate terms, both managed to achieve on an earlier stage), Saxon were also slowly falling out of favor with many fans, who used to love them to death and were getting more and more confused (not to say frustrated) by their heroes' questionable moves. It wasn't a case of do or die just yet, mind you: the strong backing from EMI was more than welcome, and there was far enough time to salvage the situation, provided the lads could assume a more assertive attitude and make up their minds on what to do next, once and for all. For good or bad, what they did about it was "Innocence is No Excuse", a record with good intentions to the brim, but that ultimately failed to put Saxon's career back on track - and oh yeah, it also bears a pretty awful front cover!

The five lads from Barnsley could still be dreaming with mainstream success, but were sure far from naive or inexperienced, and I guess they took the lukewarm reception to "Crusader" as a warning of some kind. Well, some of them at least, as it transpires that some of the members had indulged so deeply into, ermm, the rock and roll lifestyle that Biff Byford and Steve Dawson had to take to themselves the lion's share of songwriting in order to have the album done on schedule. It may have been an extra burden for the two, but it was also a wise move, as the more focused approach is more than evident throughout this LP. Actually, I'm not afraid to say most of the compositions are bloody good, and some may even be amongst the very best these guys ever wrote!

Listen to "Broken Heroes", for instance: it's an excellent piece of emotional songwriting, with an almost solemn (but not remotely contrived) atmosphere and simple, but heartfelt lyrics about all the young men who died on war. Truly outstanding. "Rockin' Again" may be far from usual as an opening number with its mid-paced riffing and somewhat melancholic vibe, but the vocal lines are so damn brilliant and the slightly inventive lyrics (about being on a rock show, you know, but looking at it from a far more thoughful point of view than usual) so engaging that you will be singing along before noticing it, believe me. "Back on the Streets" is perhaps a bit too radio-friendly to its own good, but it's still a tight and confident composition all round, and "Rock & Roll Gypsy" is no less than memorable, with truly excellent guitar work and showcasing one of the finest singing performances I ever heard from Biff, either before or ever since (and I mean it). These tunes all kick ass, as simple as that, and any review flatly dismissing such meritous songs would never have enough on itself to be taken seriously.

Yeah, I can almost hear you saying: if it does have such stand-out tracks, then how in hell did the album divide fans so bitterly? Well, I reckon it has a lot to do with production values this time around. Mind you, I'm not implying that Simon Hanhart is the guy to blame - quite the other way round actually, as I'd say he did quite a competent job on giving this LP a sleek, rock-oriented-radio sound, which I guess was exactly what the band's managers and label had in mind. Everyone involved with Saxon wanted to crack America coast to coast, and that's why "Innocence is No Excuse" is filled with harmonized vocals, keyboard layers, watered-down guitar tones, reverberating snare drums and all that: because that's what the guys taking care of the business side of things though was required to make it big in the USA. Turns out it wasn't - and it not only failed to take America by storm, but also stroke the wrong chord with their increasingly disillusioned fans, who couldn't bring themselves to really enjoy the overly-produced versions of tunes like "Call of the Wild", "Give it Everything You've Got", "Raise Some Hell" and "Devil Rides Out" - tracks that, if truth be told, would probably fare better on a more stripped-down approach. All right, "Gonna Shout" and "Everybody Up" were beyond salvation, no matter how back-to-basics a hypothetical production could have been, but I sincerely think the backlash would be way less harsh under different circumstances. 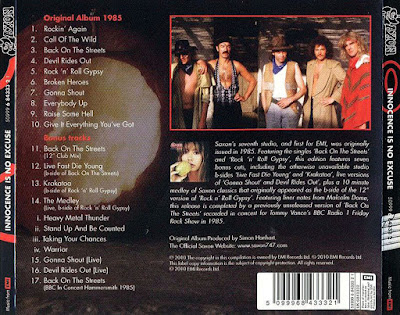 Many years have passed now, and the heavy metal fraternity have clearly formed a more appreciative consensus of opinion around "Innocence is No Excuse" since its original release, which I think it's fair enough. It's sure not a record you should cancel all your meetings for, but it's a mostly pleasant listen and many songs may really grow on you if given time. But in terms of giving Saxon a career boost, it was surely a misfire - and quite a dramatic one, as it signalled the end of the line for a large number of early fans, who could no longer recognize their former heroes and abandoned the band in droves from this point onwards. Not a good sign, and all the more worrying when you consider that sales in the USA, though mostly very respectable, never threatened to sky-rocket like those paying for the ride seemed to expect. For the very last time, Saxon tried to please everyone, and once again failed on that - and with all that was going on, you can say the evolving scenario forced them into the choice they long avoided to make. Next comes utter confusion, and then major sellout - a heart-rending thing to behold really, so I'll give you all time to take a breath before we move further into Saxon's fall from grace.

Have you been involved with any of the bands mentioned here? Have any extra info and/or corrections? Please e-mail me at drequon@gmail.com and let me know!
Postado por Drequon às 17:09