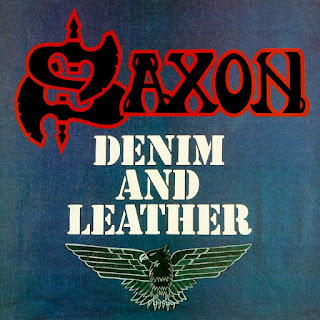 Back in 1981, the aftershocks of the NWOBHM explosion were quickly moving beyond UK and becoming a continental phenomenon - and Saxon were, without any room for a doubt, one of the forerunners of such a movement. You good reader must remember that it was a time before "The Number of the Beast" started to cement Iron Maiden's worldwide reputation, and at least a couple years before "Pyromania" rocketed Def Leppard into mainstream charts. Therefore, it's totally fair to say that Byford, Quinn, Dawson, Oliver and Gill were as strong contenders as they could possibly be at this point, head to head with the best-selling young metal acts of the period. After playing relentlessly all over the world, Saxon knew it was time to give their fervent fanbase a new LP to call their own, and they duly delivered with "Denim and Leather" - an album that closed their triptych of classics with near-universal acclaim, a mostly very strong and cohesive record that showcases nearly all the atributes that made the group such a household name back in the day.

It was one of those moments when everything falls into place, you know. The unpolished (yet careful) production by Nigel Thomas, the no-frills approach to composition, the street-level attitude and lyrics... And they even had more than a few weeks to do it, you know! Though never close of being a punk-infused band, Saxon looked and sounded like guys from the streets with real-world aspirations, and it surely stroke the right chord with the growing metal fanbase of those times - and one should always keep in mind that the whole NWOBHM was most of all a working-class phenomenon, maybe even more so than the safety pins and spit parties of the punk rock ethos (well, at least before the spandex trousers and fluffy haircuts and harmonizing keyboards and all that). These five guys had the sound, the looks, the energy - they had pretty much everything that was required to make it big. And back in 1981, they were getting very big, believe me.

This LP opens with perhaps the most memorable composition from the band's repertoire, "Princess of the Night". The built-up at the start of the song (the main riff, the instantly recognizable vocals, the simple drum roll and then the explosion of the chorus) is one of the most exhilarating moments from the entire NWOBHM, not to say British Metal as a whole - and all with good reason, you know. The lyrics about a retired steam locomotive are far from usual, but still work to huge effect, and if the final solo from Graham Oliver is not enough to set your pulse racing, then sorry my friend, but I'm afraid you're already dead! It kicks ass like a monster, and the fact that most of the other tunes here feature do not pale that much in front of such a killer opener speaks volumes about just how worthy of attention this record is.

Most songs are not that fast, actually, keeping their feet away from the pedal and exploring mid-tempo avenues most of the time - though sounding way more intense than most of their competition, readers take note. "Never Surrender" shows some early, fleeting signs of self-parody perhaps, but its main riff were cloned so many times by so many bands that it would be unfair to draw any criticism on Saxon by inspiring the crowd, you know! Songs like "Midnight Rider" and "Rough and Ready" are also pretty cool, and even when the band rides to more accessible highways (such as in "Out of Control") they do it with such a sense of conviction that you can't help but having loads of fun listening to it. Even more impressive is "And the Bands Played On", a song carried along by a guitar lead that works like a riff and that conjures the feeling of being in a rock festival (Donnington's Monsters of Rock in 1980, that is) like few ditties done before or ever since. Brilliant, brilliant stuff. Maybe only "Play it Loud" didn't manage to stand that well to the test of time, but still it's far from a failure, and hardly diminish the overall feeling of pure metal enjoyment.

Being a record that opens in such breathtaking fashion, it would be suitable to close proceedings with a similar amount of power, you know. "Fire in the Sky" is a scorcher, one of the fastest songs ever penned by Saxon at the time, and its proto-speed-metal approach surely made a difference for hundreds of even faster bands to come. And the title-track is perhaps one of the most efficient metal anthems ever written, shifting its attention from the sheer power of heavy music and blah-blah-blah towards the fans themselves, who truly made the dam begin to burst and all that. It's a song about communion, and it pays a nice tribute to the band's following while painting a pretty interesting (and mostly accurate) portrait of the whole NWOBHM sub-culture. Sterling stuff, and still one of my favorite album closings to this day.

It's nearly impossible to say just how different things would have been if Saxon had managed to stretch their claim to world domination for a longer period - I mean, bands like Maiden and Leppard paved their way to super-stardom not by lack of competition, but most of all due to their own merits. Still, "Denim and Leather" is the last truly classic LP from a band at the height of their powers, being a mandatory listen to everyone with at least a passing interest not only on NWOBHM, but heavy music in general. Many bad decisions would hamper their progress in subsequent years, to a point that Saxon got close to become a laughing stock for the metal community - and, though sure they recovered their strenght and kept a mostly very pleasant run of releases in later years, their thunder would never sound as loud as on their early 80s heyday. But oh well, all things are due to pass anyway, and I'm very glad that Biff Byford and Paul Quinn (the remaining members from the classic line-up) are not just churning out old favorites on stage for a living, you know (not that it would be at all a shame to do so, mind you). If you don't have this one, make no questions and go get it straight away. Now!