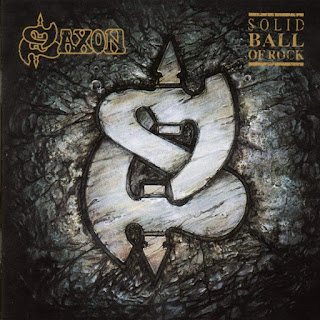 After spending over two years with not much to lean on, relying on intermittent touring and a couple live albums to make a living, Saxon finally reached a contract agreement with Virgin in 1990, something in no small part helped by the encouraging results of the "Greatest Hits Live!" package earlier that year. After securing a much-welcomed financial backing for the immediate future, the time was right for a whole different challenge for Saxon: recording a string of albums strong enough to sweep aside the bad memories left by previous flops and get the band back in the game for good. "Solid Ball of Rock", the first studio product of such endeavour, may not be the triumphant return to top form some were eagerly expecting, but it surely set the quintet in the right direction and made a clear point that all ill-fated attempts to deliver pop-tinged, watered-down hair metal tailored for MTV would be ancient history for the time being.

The importance of new bassist Nibbs Carter in reinvigorating Saxon's career should never be understated. Not only he filled Steve Dawson's shoes quite effectively in the live environment, but he took to himself the lion's share of songwriting as well, being the main responsible for the songs on "Solid Ball of Rock" and keeping a very significant input on the composition side of things ever since. No less than five out of the eleven tracks here featured were written solely by him, and he also helped to complete another three tunes. It seems that the other guys were still burned out by the vicissitudes of the not-enough-distant past, and good kid Carter took this state of affairs as a challenge rather than a hindrance, immediately positioning himself as a force to be reckoned within the band. And you can listen to it throughout the record too, with some truly interesting basslines and a strong presence in the final mix. He meant business, you see, and there's no denying the goods were mostly delivered on this one.

The CD starts nice and catchy enough with the title-track (written by Bram Tchaikovsky, of all people), a song with undeniable influences of AC/DC and a cool, memorable chorus. But you have to listen to the speed-metal riffing of "Altar of the Gods" blowing out of your speakers to fully grasp the extent of Saxon's recovery. It's easily the most aggressive song they'd wrote in years, and, though not the most remarkable piece of songwriting ever committed to tape, it was quite a breath of fresh air after all the misery their loyal fans had to endure. Similarly, tracks like "Lights in the Sky" (a song about UFOs, mind you, as perhaps all the themes involving aeroplanes and motorcycles were exhausted by then) and "Baptism of Fire" show Saxon at their most hard-edged in years, both carefully crafted to headbang all doubts away from the hearts of faithful fans.

Though not as forceful as the aforementioned trio, "Requiem (We Will Remember)" is an undisputed highlight as well, a moving homage to fallen rock 'n' roll heroes like Phil Lynott and Bon Scott that almost rivals "Broken Heroes" as the most touching song they ever penned - and that's quite something, believe me. And "Refugee" is also very interesting, a slow number that never gets boring thanks to well-crafted melodies and a heartfelt performance from Biff Byford. Quit all those awful saccharine ballads from the past for good, lads, that's the emotional stuff we want to hear from you!

Not all songs fare that well, and sometimes things veer worryingly close to the easy-listening-metal of previous albums (not that it was at all easy to listen to it, you see), as in "I'm On Fire" and "I Just Can't Get Enough" - the latter seemingly a leftover from the "Destiny" days, which is hardly a promising thing if you ask me. Though far from objectionable, "Crash Dive" (quite impressive basslines on this one BTW) and "Ain't Gonna Take It" serve little purpose but to fill up the space required for a full length release, being mostly forgettable as soon as the album is over. With songs written on disparate moments during a considerably large period of time, it's no surprise that the album sounds a bit disjointed in places, and Good soldier Nibbs Carter went as far as to record no less than two instrumental cuts ("Overture in B-Minor" and "Bavarian Beaver") as an attempt to glue things together more efficiently. It works to a certain degree, but I'm sure the musicians would have enjoyed a bit more time to test ideas before being rushed into the studio.

Still, and despite these shortcomings, "Solid Ball of Rock" is a pretty decent release as a whole, and its release sure sparked a flame of renewed optimism into the hearts of many fans. This record never threatened to rival the amazing classics released during the early 1980's, but it was arguably the most effective and enthusiastic set of songs they put together since "Power & the Glory", and the encouraging reception it garnered sure convinced the bums from Barnsley that they had a good thing going after all. It would take a few more CDs to solidify their newfound conviction and fully regain the respect of the metal fraternity, but Saxon were finally back on track - and this alone makes "Solid Ball of Rock" a worthwhile investment for anyone with more than a passing interest for NWOBHM and old school metal in general.

Have you been involved with any of the bands mentioned here? Have any extra info and/or corrections? Please e-mail me at drequon@gmail.com and let me know!
Postado por Drequon às 18:43