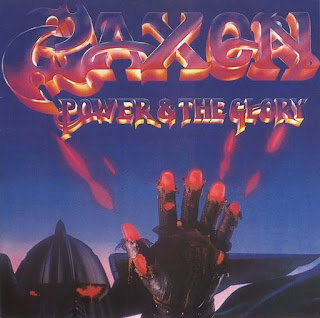 I have absolutely no problem to admit that describing a successful album like "Power & the Glory" as the beginning of the decline for Saxon would sound contradictory, maybe even stupid. It was their best-selling album to date, the European tour was a huge success, and the band were shifting a increasingly relevant number of units in the USA - the most strategic market to conquer in terms of achieving world domination, and it sure was at the grasp of their hands. Therefore, and to put it kinda bluntly, labeling this LP as a failure would be no less than ridiculous. It's actually a pretty good record that had quite an impact back in the day and stood well enough the test of time, being a very astute purchase for metal fans up to this day.

But an album is more than the package you buy at the record store, you know. Each one has a context, carrying the glories and burdens of the past while also signaling the avenues to be taken in the future, if there are any. And "Power & the Glory" is sure no exception: in Saxon's chronology, it marks the very beginning of the metamorphose. Gone would be the street-level spirit and gritty bite of early releases, in favour of more calculated (and, later, downright commercially-inclined) attempts to break into mainstream territory. Not immediately, of course. It was still only in the details, it would take a while to really take shape, it was even enjoyable on many occasions - but it was already there, and you can spot it if you look close enough.

First of all, the production. The band recorded the album in Atlanta, USA, under the guidance of Jeff Glixman, a professional known for his work with Kansas, Magnum and Gary Moore to name a few. It's pretty obvious that the idea behind this was to move away from the in-your-face delivery of previous releases, bringing to the table a cleaner, more polished (and more marketable) sound. It mostly worked out as planned, and it adequately fits to the more broad palette employed by the band this time around (more on that later), but it takes away a perceivable amount of the quintet's energy and, dare to say, personality. Saxon have always been a band from the streets, formed by guys you could meet by chance at your local pub, and they sound a bit more distant in "Power & the Glory" - not only due to the slightly exaggerated use of reverb in the final mix, but mostly on a symbolic level, you know. The blokes were starting to sound no longer like a gang, but more like rockstars, and it was just wrong for Saxon, as they would find out as time moved on. But I don't blame them for trying, really: I mean, how could have they known?

The album kicks off quite nicely with the title-track, an anthemic tune with great instrumentation and a memorable, catchy chorus that would be a staple to the band's setlists for years to come. "This Town Rocks", "Redline" and "Warrior" are also great, a bit less fiery than the band's early classics perhaps, but still filled with good ideas and commendable levels of energy and enthusiasm. These songs add a different sense of sophistication to Saxon's trademark sound, but never depriving the band from their characteristic bite, so I guess most of their faithful fans enjoyed the breath of fresh air. The final number, "The Eagle Has Landed", was tested on the live environment for a while before being commited to tape - it even made it into a session for BBC's "Friday Rock Show" in 1982, and I guess that the name of their previous live LP wasn't that much of a coincidence, you know. As a consequence, I guess few people were taken aback by this slow, prog-inclined epic composition about landing on the Moon. I like it a hell of a lot, mind you, and it still feels to me like a much-welcome musical adventure, one of the highlights of this LP.

"Nightmare" is not a bad song at all, you know - it's actually a very respectable attempt to write and record a single without getting too fluffy in the process. But I must say that the many soft guitar intrusions and the harmonized backing vocals whispering "where were you?" were stretched beyond safe levels here, the track as a whole being rendered a bit too tiresome as a result. The same can be said about "Midas Touch", a tune that starts with epic promises but unfortunately dies out in some repetitive guitar melodies and a nondescript, easy-to-forget chorus. And "Watching the Sky" is an album filler if there ever was one, I'm afraid, rehashing old formulas without getting anywhere in the process. 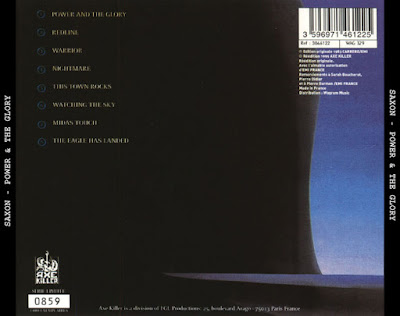 All things considered, "Power & the Glory" is an effective and enjoyable record, and it sure maintained the run of victorious releases from Saxon to a huge extent. And an extra salute must go to bassist Steve "Dobby" Dawson and drummer Nigel Glockler, both responsible for truly inspired performances throughout. Saxon were riding the crest of a wave at this point, and it's only natural that they wanted even more - something that seemed all the more tangible once they parted ways with their french indie-label Carrere and signed the dotted line for the mighty EMI in 1984. Things would never be the same, for good and bad, and "Power & the Glory" is a fitting document of such ongoing changes. Consider this to be a very strong 3-star rating, almost a 4-star if you like.

Have you been involved with any of the bands mentioned here? Have any extra info and/or corrections? Please e-mail me at drequon@gmail.com and let me know!
Postado por Drequon às 08:21