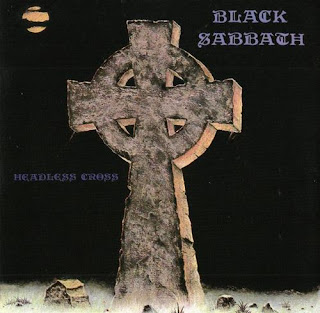 Perfectly adequate musical contents aside, saying that "The Eternal Idol" rejuvenated Black Sabbath would be a glaring overstatement. Contemporary reviews were tepid at best, and the controversial decision to play a handful of shows in South Africa (a country still enduring the abject Apartheid regime at the time) draw huge criticism by public opinion and activists, with a strong backlash from European promoters meaning that few shows were performed to support the album. Sales were consequently very poor, and both Vertigo (in England) and Warner (in the USA) uncerimoniously dropped the band as a result. Faced with such difficult circumstances, the musicians involved with the venture started to jump ship, with Tony Iommi, Geoff Nicholls and Tony Martin being the only ones determined to soldier on. It would surely be a long way back to the top, but musically they had a reasonably good thing going with the previous record, so they pretty much decided to stay on that road for what would become "Headless Cross".

For the songwriting sessions, the remaining trio were joined by much-talented drummer Cozy Powell (of Rainbow/Whitesnake/MSG fame), and this nucleus managed to craft a pretty respectable set of compositions. Some recent critics go as far as to consider it the best Sabbath album sans Ozzy or Dio, which I tend to consider a bit too over-the-top, but there you go. Still, it's clear for all to hear that Tony Iommi still had the chops to make it happen musically, and the supporting musicians (augmented by bassist Laurence Cottle for recording purposes) were of sufficient high calibre to honour the band's name on the front cover. Stylistically, it tries to build on the same formula used on "The Eternal Idol" less than two years previously, merging the eerieness and muscular riffing associated with the Sabbath brand with generous doses of then modern-era heavy rock - surely an attempt to summon back the old faithful fans while still keeping things accessible enough for some much welcomed rock-radio airplay (not that these songs ever received any, you know).

After a somewhat pointless intro ("The Gates of Hell"), the title track explodes with a memorable main riff and atmospheric keyboards used to great effect, enhancing the mysterious atmosphere rather than softening it. And Tony Martin, treated with utterly unfair derision by many fans and critics, does a truly commendable job here, this tune easily being one of the most memorable cuts from Sabbath in quite a long while. Side A of the record is particularly enjoyable, with "Devil & Daughter" being a more catchy tune with very interesting hooks and "When Death Calls" conjuring an impressive, spine-chilling sense of malevolence and dread. It's not easy to balance eerie ambiences, hard-rocking power chords, a catchy chorus and many tempo changes all in the same song and still keep it all cohesive and truly interesting, and that's exactly what Iommi and his partners in crime reached with this fantastic track. And it even showcases a guest solo by none other than Brian May, so let's face it, you have more than enough reasons to at least give it a chance.

Unfortunately, the album starts to lose breath on the flipside, with "Kill in the Spirit World" failing to blend its radio-friendly intonations with a few murky riffs and a somber chorus. It sounds a bit too disjointed for its own good, though the good intentions are all over the song. "Call of the Wild" is reasonably strong and presents perhaps the finest performance from Tony Martin on the entire album, but I must say that "Black Moon" failed to convince me, sounding too much of a Dio-era leftover for comfort - though it would be sure unusual for Sabbath to have such an harmonized and often-repeated chorus way back in the early 80s! Fortunately, "Nightwing" is a truly brilliant final track, and quite an original one for late-80's Sabbath standards, with a nice, very evocative atmosphere enhanced by acoustic interludes and another creative keyboard contributions by Geoff Nicholls (a man rarely acknowledged by his input in Sabbath, by the way). It's a tune that moves slowly but without ever getting pointless or dull, closing proceedings in a truly graceful manner.

Though far from being a return to top form, "Headless Cross" enjoyed a modicum of success in some European countries and in Japan, enough to boost the band's morale after some truly disheartening times. It's not a record you're likely to spin on a daily basis, and some more demanding fans may feel it is too detached from the archetypal Sabbath to be truly enjoyable. But I tend to think that its interesting features more than surpass its shortcomings, the resulting album being a nice listen and a worthy addition to the band's canon. If you happen to spot it on your local record shop for a reasonable price, give it a nice and warm place to call home, will you?

Have you been involved with any of the bands mentioned here? Have any extra info and/or corrections? Please e-mail me at drequon@gmail.com and let me know!
Postado por Drequon às 19:26