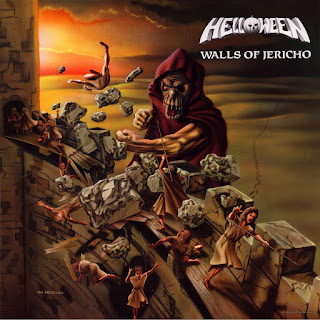 (It's been a while since I wrote the first instalment of this particular series. Still, I just read that review and think it still reflects my feelings about the record, so there's no need to rewrite it at all - let's just keep things going, so hopefully I can make all the way through Helloween's large discography in the coming months. Oh yeah, their new album is out and it's quite a kickass record, but this blog was never about contemporary reviews as you can see, and I'm pretty sure no one else reads it regularly but myself, so I'm not in a rush. Let's just enjoy the ride while it lasts!)

After an impressive (but slightly uneven) debut with a self-titled mini-LP, the German entity known as Helloween wasted little time (no pun intented) before putting together a set of songs to comprise their first full record. Given the encouraging response to their earlier efforts (that including the two songs on the "Death Metal" split album), it's fair to say that the pumpkin was taking off in a strong fashion, and expectations around the group were understandably quite high. And Helloween did the trick, you can bet your ass they did. Produced by Harris Johns and recorded at the now near-legendary Music Lab in Berlin, "Walls of Jericho" is easily one of the groundbreaking albums to come out from Germany in the 1980's, with a mixture of melody, heaviness and fast delivery that was very close to revolutionary - a record that pretty much spawned the entire European speed metal scene, and still a milestone thousands of bands are forever indebted to.

After a unimpressive (but also perfectly tolerable) self-titled intro, "Ride the Sky" comes exploding out of your speakers - and this is perhaps the song that better represents Helloween's huge (and often overlooked) contribution to speed metal. It's all obviously very fast, but you won't mistake it for thrash metal, for instance: fast picking is a fundamental feature for both subgenres, but early Helloween's impact isn't that much based around the riffs, but rather comes from the drive, dexterity and astute use of melody and harmonies all along. The core elements of power metal are all there, and this is perhaps what differs Helloween (and like-minded followers like Blind Guardian and Paradox) from bands like Agent Steel or Razor: they never lose their grip on emotion, and there's always a feeling that something grandiose (and not simply fast or aggressive) is going on. This is perhaps more tangible in the near arrogant solo section, a showcase of Kai Hansen and Michael Weikath's prowess that takes you to every possible place  while also creating a majestic, almost otherworldly atmosphere. This song is a monster, one of the strongest cuts ever penned by this band, and it's enough to make you sure, from first listen, that Helloween were destined to greater things.

Next comes "Reptile", and it's a song that, despite not being half as impressive as "Ride the Sky" (it's my third less favorite here, actually), gets much closer to what we would hear from the "Keepers" onwards. Things are not insanely fast, the lyrics are laughable (in a good way) and the song as a whole seems to say "crank it up and crack a beer, let's have fun" rather than "yeah, we kick major ass, listen to what we can do". It's a song written by Weikath, and I have a theory about him and Helloween that I will keep under wraps until the right time comes ("Keeper 2", coming soon) - but it's another of his contributions, "Guardians", the one that (to my ears, at least) more strongly hints to what would be Helloween's signature sound, the template that would turn them into a truly innovative and even revolutionary band for the metal universe. I mean, it's perhaps the first song that completes the route towards what would later be known as melodic power metal. It's not that different from "Ride the Sky", mind you, but it's a more friendly, uplifting approach to the same basic formula, and it really takes the melodic side of things up to the next level. This is the blueprint that bands like Stratovarius, Sonata Arctica and Angra would follow in later years, a truly tremendous track that still ranks among the all-time classics from an entire genre.

Let's take a minute to laud the abilities of the five musicians involved with this record, shall we?The twin guitar work is no less than amazing: Weikath is a technical player with a keen ear for melody, while Hansen is a more ferocious, roaring beast whose contributions add something of an instinctive heaviness to the proceedings. A bit like Glenn Tipton and KK Downing used to do in Judas Priest, if you really need a comparison. I truly enjoy Kai's voice BTW: I know it's a truly divisive subject (some love it to death, others hate it with a passion), but his raspy, nasal, kinda malevolent delivery fits quite well into the sheer intensity of this particular repertoire. Ingo Schwichtenberg is a force of nature really: his pace is robust and relentless, with truly impressive levels of stamina (seriously, just listen to what he does during the opening of "Heavy Metal (is the Law)"), and some of his fills are no less than superb, even moreso when you consider he's playing at machine-gun speed most of the time. And Markus Grosskopf should be a way more lauded bass player if you ask me: his basslines are simply something else. To me, he is easily one of the greatest bassists in metal, and it has a lot to do with his ability to fill every possible (and some seemingly impossible) spaces with well-crafted, sometimes quite complex, but always smooth and ear-catching arrangements. In Helloween, the bass isn't exactly a backbone (as in, say, '80s Judas Priest), neither a showcase of impressive, but rather tiring technical prowess (yeah, most prog metal bands, I'm talking to you): he just knows exactly what the song needs, every single time. It needs fast, he goes fast; it needs groove, well, there it is; it needs some quirky melody, and lo and behold, he just nails it once again. I can only think of Steve Harris when it comes to this incredible understanding of what a bass is supposed to do in a metal song, and "Walls of Jericho" makes Markus' merits clear in amazing, nearly exhilarating fashion. I'm a lifelong fan, and you'll read me wax lyrical about his work many times through the forthcoming reviews, but let me tell you this: the guy is a master of his craft, and this album kicks even more serious ass because of him. 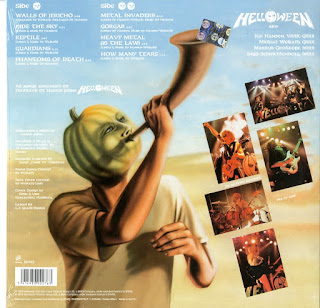 This could have been a near flawless LP when it comes to songwriting, but I feel that "Phantoms of Death" and "Gorgar" didn't age that well and are of a minor calibre when compared to the rest of the package. Despite having an opening riff disturbingly similar to Iron Maiden's "2 Minutes to Midnight", "Phantoms of Death" simply lacks the hook to make it really interesting - the guitar work, albeit quite busy, is mostly a variation around the same few notes, and the instrumental section tries to achieve the same levels of awesomeness of "Ride the Sky" (or "Victim of Fate" before it), but only manages to sound aimless and kinda bloated. And "Gorgar" tries to be a heavy-but-funny song about a guy addicted to videogames, but it just never takes off really, with rather unimaginative instrumentation that plod along with the silly lyrics and chorus. These particular tunes are the ones where the rough edges in songwriting are more evident, and, though not really bad by any stretch, are enough to prevent "Walls of Jericho" from getting an even higher rating.

But fear not, my friends. Even when they're being cheesy as hell (as in the double death-to-false-metal anthems "Metal Invaders" and "Heavy Metal (Is the Law)") they still bring it home in major fashion, and many bands out there would sell their mothers to have an album closer as strong as "How Many Tears": masterful, inspiring, lightning fast in places, but still immensely melodic and able to conjure a spellbinding atmosphere of commitment and power. Granted, the production may be a bit muddy in places, and the artwork is not exactly my cup of tea, but seriously, who cares? It begins with a classic, it ends with a classic, it has a third classic in the shape of "Guardians" and a lot of tasty donuts along the way: what else could any of us want? "Walls of Jericho" is a landmark release for European speed metal, a forerunner of melodic power metal in places and oh yeah, an undisputed classic from the 1980's, full to the brim with replay value to this day. And it's just their debut full-length LP, you know. If you don't have it, stop making questions and go get it straight away.