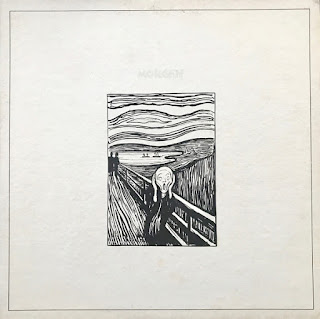 For a humble explorer like myself, it's kinda exciting to know there are still so many great Psych Rock bands waiting to be discovered - talented and hopeful musicians that only managed to release one or two slices of vinyl before plunging into near-total oblivion for the decades to come. A common story of course, and it will be the fate of countless rock 'n' roll hopefuls until the world reach its very end. But you don't need to be known to be good, you see, and Morgen were yet another one of those groups who had genuine talent on display but never got anywhere, which was a particular shame in their case if you ask me. Oh well, at least there's a very pleasant LP to forever remind us of their existence, and, even though I'm hardly going to make them more well known by simply writing about them, let's drop a few lines about their pretty good music for posterity's sake. And oh yeah, the use of the revered painting by Edvard Munch on the front cover doesn't go unnoticed: a bit cliché perhaps, but quite an eye-catching choice, right?

Led by guitarist/vocalist/songwriter Steve Morgen and completed by Barry Stock (G), Rennie Genossa (B) and Bob Maiman (D), this 4-piece from Long Island, NY (USA) seems to have been a promising young act by the time Probe (a recently stablished sub-label for ABC Records devoted to psych/prog records) offered them a record deal in early 1969. I really don't know much about them, mind you, and I don't feel like making an extensive research right now (though I would definitely want to hear from you if you happen to know more), but it's safe to say they did deliver a great album full of urgency and dynamics, going from the contemplative to the lascivious with admirable confidence and enthusiasm. The production values are quite fuzzy and raw, with many perceivable rough edges and a mix that puts Steve Morgen's voice way up front in places, sometimes close to the point of distortion. Not the most professional job you'll ever hear, but it actually helps the album's cause rather than hinder it, giving the proceedings a garage feel that surely adds an extra charm to the listening experience.

Opening number "Welcome to the Void" is a fantastic, slightly gloomy and near-hypnotic acid rock tune with a distinct hard rock feel throughout. No flower-power here: Morgen (the band) were surely more about rock and roll excitement than most of its contemporaries, something that makes it particularly appealing for today's listeners. "Of Dreams" is also great, a somewhat atmospheric tune that sounds like The Zombies on acid (weren't they anyway?) and really makes your imagination fly. Steve Morgen's vocals are specially brilliant on this one: some may criticise him for being a bit too over-the-top in places, but I think it's always reassuring to hear someone moving from whispers to near-screaming, from almost spoken parts to explicit sighs and moans, all with no holds barred and genuine amounts of passion. "Purple" is another winner, a rock tune with an excellent drum performance and fuzzy guitars to die for, while "She's the Nitetime" immediately reminds me of Jimi Hendrix, for the best reasons you can think of. 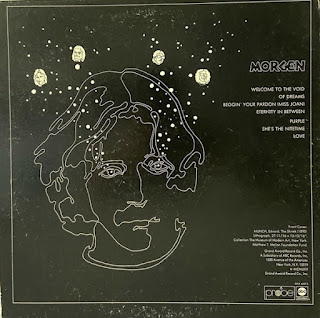 Sometimes the whole thing sounds a bit too thrown-away for comfort, that's for sure: "Beggin' Your Pardon", for instance, drags along way longer than it should, while the otherwise excellent "Eternity in Between" (a strong rocker hugely influenced by The Who) presents a long drum solo for no fathomable reason (and drum solos in a studio record are hardly winners, you know). I think it has something to do with the improvisation-friendly, near-live approach of the whole recording, but I wouldn't be at all surprise if, despite being truly talented, the lads simply didn't have enough songs for a full LP just yet and had to resort to a few tricks in orded to deliver a full-length perfomance. Whatever the case, the carefree spirit of instrumentation works admirably well in the closing number "Love", a superb 11-minute journey through countless textures and swift changes in direction that more than justifies the belated adulation devoted to Morgen by many collectors and music enthusiasts.

It's a shame they didn't last the distance after their very promising debut - a sad state of affairs that supposedly has a lot to do with the fact that the short-lived Probe imprint closed doors in 1970, leaving Morgen with not much to lean on. None of the musicians seem to have move much further in the business; I believe mainman Steve Morgen got involved with some solo experimentation in the early 1970's, but none of it seem to have ever come to fruition, and no subsequent releases ever came out, at least to my knowledge. Maybe it was supposed to be their lifespan anyway: one good album, ignored by their peers but lauded by future generations, and nothing more. Life fast, die young - not a good piece of advice for individuals, but perhaps the right way to do it for many rock bands. Philosopical questions about the meaning of life (and art) aside, anyone with an interest in the development of heavy music throughout the decades should give this album a chance - something made easier by enterprising individuals such as Sunbeam Records, that released the band's sole album on CD for the benefit of eager collectors like myself. 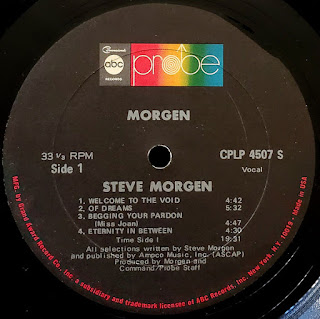 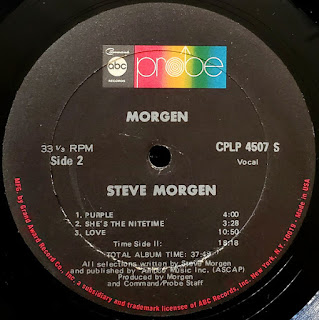 Thanks a million to Discogs for picture sleeve and label scans!