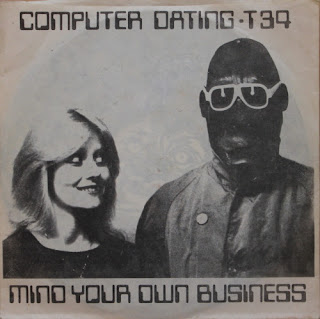 Sometimes, writing about a given band's music can be a truly challenging (not to say very confusing) mission. The entity that once roamed the Earth (well, London and its thereabouts, actually) under the name T34 is a very illustrative example in this regard. Though often credited as a NWOBHM outfit (including the authoritative NWOBHM Encyclopedia by Malc McMillan), it has but a passing resemblance to the genre if we're to be honest here, and the fact that so many people consider it to belong on the same shelf where you would put, let's say, a Satan or Sweet Savage record is somewhat puzzling, to say the least. Yeah, I know NWOBHM is something of an arbitrary definition right from the start, and many of the bands labeled as such are no stranger to some crossover potential, being equally appealing to punk, power pop, new wave, prog and pub rock audiences, to name a few. Still, I consider T34's case particularly intriguing: it's not that they didn't deserve to be mentioned at all (let's face it, if a 7'' like Brands Hatch's "Teacher Teacher" can be regarded as a NWOBHM collectable, then nearly everyone else can), but it is surprisingly difficult to decide whether to attach the NWOBHM tag to them or not. I'm still on the fence myself as I write this piece, you know.

Some may still not be fully aware of this, but T34 (a name that has something to do with war tanks, I guess) is an offshoot band from none other than Smiler - yeah, that Smiler, the London-based blues rock group that became something of a legend due to its connection with Iron Maiden. It's common knowledge that guitarist Mick Clee was a direct descendent from Smiler, but vocalist Steve Williams (nothing to do with Budgie) also lent his talents for the old combo in the early 1980's, including a brief period when they assumed a more punk-rockish outlook under the name Vic Rubb and the Vapours (not to be confused with British power pop band The Vapors, whose single "Turning Japanese" entered the charts in 1980). When the other half of the Clee brothers (guitarist Tony Clee, that is) decided to take a break from music in early 1981, Mick and Steve kept working together towards creating a different entity, way more attuned to contemporary trends than Smiler seems to have ever been. 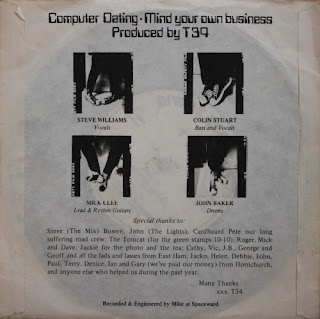 After a series of well-received gigs in and around London, the band got into the famed Spaceward Studios in Cambridge and recorded two tracks for the purposes of a debut 7'' single, released by their own Divage label. "Computer Dating" (a somewhat intriguing concept really, as networking technologies like the Internet weren't really a thing back then) is a somewhat bizarre number, with half-spoken vocals and sedated arrangements interspersed with some unexpectedly heavy guitar chords and solos. It's surely the closer we get to NWOBHM territory around here, but the chorus has more of a new wave / punk rock vibe to my ears, so I'm not entirely convinced they had anything more metallic in mind while writing and recording this one. A perfectly good rock song all the same, though, and the same goes to flipside "Mind Your Own Business", a melodic rocker with a truly catchy chorus that somehow reminds me of a collision between Girl and The Police (yeah, me neither). Maybe those aware of how bands as Jeddah, Midas ("Can't Stop Loving You Now") and Masterstroke ("Prisoner of Love") sound like will get a better picture of what is going on around here. The guitar work is very creative throughout, and I also like the way Steve Williams sings this one, with something of a controlled raspiness (whatever that is supposed to mean) that really adds some extra charm to the proceedings. All in all, a very nice listening experience, and a slice of vinyl you'll do well to add to your collection, even if it's nowhere near a full-blown NWOBHM assault. It's also not regarded as an ultra-collectable, which means it can be located rather easily and usually offered for a fair price. Most copies come out without a picture sleeve, but it's not exactly the most eye-catching artwork ever printed, so I reckon you shouldn't mind that much if your best option is to buy this 7'' in a generic sleeve. 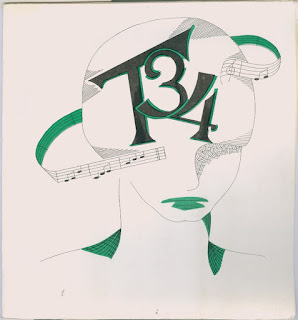 Though this limited, privately-pressed slice of vinyl didn't exactly turned T34 into national superstars overnight, it did serve its original purpose, securing a few appearances in magazines such as Kerrang and selling reasonably well at gigs. A further 7'' would come out towards the end of 1982, but I won't delve too deep into its contents, as it's a far more commercial product and will hardly appeal to anyone but the most dedicated (obsessive?) NWOBHM completists. Their version of "Rock On" (yeah, the David Essex song) is barely passable if you ask me, but "Looking After Me (Looking After You)" is a well-crafted synth-pop number with considerable replay value for those who enjoy such musical avenues. No longer our cup of tea, that's for sure, but it seems to have been an honest attempt to write more chart-friendly music, and this 7'' single (issued by Galaxy Records, most probably another self-financed affair despite the deceptive GAL007 catalogue number, and with a pretty artsy cover sleeve) could have opened the way to greater things if only T34 could find the right management and/or financial backing. This was not to be, though, and (despite some radio airplay for "Rock On" and a string of well-attended live appearances) the group would fold unspectacularly in late 1983, apparently unable to get back on their feet after Mick Clee decided to make an extended break from the scene. 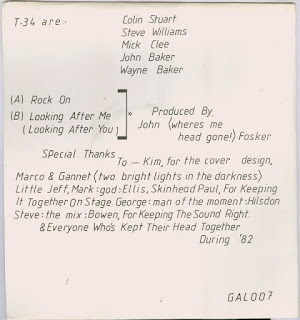 Most of those involved with T34 seemingly kept a low profile in later years, pursuing activies outside of music for the most part. I know for a fact that drummer John Baker used to play electric jazz with a band called The Anthologists, but they disbanded in early 2015, and I couldn't find any connections involving him ever since (it was hinted that the same John Baker played drums for early 90's indie rockers Ship of Fools, but I don't have any solid ground to confirm it just yet). Never heard anything from the other guys, though, and I'd surely love to know more - so, if you happen to have any information to share, I would be more than happy to hear from you.

01. Computer Dating
02. Mind Your Own Business

Special thanks to Discogs for picture sleeve scans!