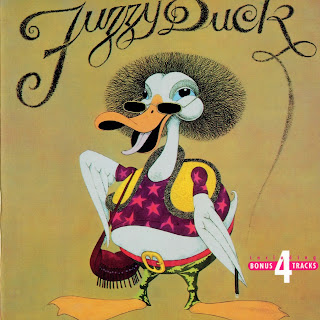 Some things seem to be destined to remain as mysteries, I guess. It's a truly difficult challenge for me, for instance, to understand just how could Fuzzy Duck be so cruelly overlooked in the early 1970s. It's not only that they were good, you know - they were actually damn awesome, more than capable to hold their own against the strongest competition in the heavy rock scene of the time, something which is an achievent in itself. Unfortunately, their undeniable collective talents could only take them so far, and their sole LP became an ultra-collectable as decades went on - a status that pretty much remains to this day, though some licensed reissues (including my personal copy, a remastered CD issued in 2012 by Esoteric Recordings) are also out there, for the benefit of those who can't spend a full month's salary to buy an original pressing.

Fuzzy Duck emerged right at the heart of then-very-successful MAM label, as something of a super band in the shape of Mick Hawksworth (B/V, ex-Andromeda and Five Week Straw People), Grahame White (G/V), Paul Francis (D, who performed with ex-Searchers' Tony Jackson and also handled the sticks for Tucky Buzzard) and Roy Sharland (K, ex-Spice and seemingly also involved with The Crazy World of Arthur Brown). Seen as a quite promising prospect at the time, they were almost immediately taken to a studio to record their debut album - which curiously just came out after the original quartet was no more, with Grahame White being replaced by Garth Watt-Roy, who also took all vocal duties for himself. The band's sole LP was released as it was recorded, though - and it was a good thing in fact, as the chemistry between the original four-piece is quite remarkable and it would have been such a shame if these tapes were shelved, languishing for decades on end in some dusty archive.

Surely influenced by then-rising bands such as Uriah Heep and Deep Purple, Fuzzy Duck were still keen to add generous pinches of personality and experimentation to their cauldron, creating an inventive, energetic, somewhat jazzy, very individualistic variant on prog/psych music. All the musicians involved kick major asses in their respective instruments too, something that add extra levels of aural pleasure due to the top notch musicianship. In a close-knit bunch of musicians, Roy Sharland and Mick Harnsworth somehow manage to shine a bit more than the rest: the keyboards, though very prominent, are always tasty and engaging (reminding me of the very best moments of bands such as Caravan), and some of the basslines (as in "Mrs. Prout" and "More Than I am") are a joy of their own, highlighted by a generous mix that gives it a lot of space to shine. 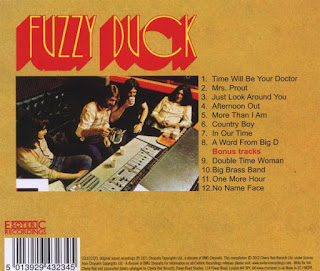 The opening salvo with "Time Will Be Your Doctor" and "Mrs. Prout" is no less than outstanding, most of all due to the second track, an immensely inspired piece of songwriting that manages to be both quirky and catchy without losing any impact along the way. Similarly, tracks such as "Afternoon Out", "Just Look Around You" (with a twin-guitar work to make Wishbone Ash jealous) and the truly outstanding "In Our Time" are sure to make happy all those who enjoy the 1970s approach to heavy music. Some may not enjoy the comic value of album closer "A Word from Big D" (a semi-instrumental tune with 'vocals' by someone impersonating a duck, no less) but, apart from this slightly questionable move, there's hardly a stinker in sight, and the replay value of this self-titled LP is extraordinarily high.

The CD reissue I'm working with includes four bonus tracks taken from singles, all from the the Watt-Roy period - and, although far from disappointing ("One More Hour", for instance, is quite a good song), they somehow lack the high-spirited enthusiasm of the LP cuts. It's not very surprising to learn that the band didn't manage to last for long after the original line-up went their sepparate ways, Fuzzy Duck's lifespan amounting to little more than a year in total. The main factor seems to have been the poor sales of their sole LP (most probably due to poor distribution, as MAM didn't put much effort in a record they seemingly deemed unrepresentative), a situation not helped by the lukewarm reception to their later singles. Whatever the case, Fuzzy Duck's legacy is quite a respectable one when you take only the music in consideration - and it's the music that matters, right? Don't be afraid to spend some money on it, most of all if you enjoy some 1970's prog/psych rock in your spare time. 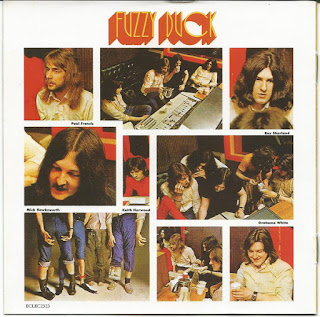 Fortunately, most of those involved found good employment elsewhere, with Graeme White joining the ranks of Capability Brown and Krazy Kat, while drummer Paul Francis later teamed up with Tranquility and also handled the drumsticks to Mick Ronson (he's still active to this day, as a live and studio player in the British jazz scene). As for latecomer Garth Watt-Roy (a common feature in the studio super group The Greatest Show on Earth, incidentally), he recorded vocals for Steamhammer towards the end of their career, and also worked with acts such as Limey, The Q-Tips and East of Eden in later years. Mick Hawksworth would join Alvin Lee's Ten Years Later in the latter half of the 1970's, subsequently being enrolled by the Mick Clarke Band as well. More recently, the gifted bassist recorded a handful of obscure (but pretty cool) CDs with an outfit called The Flying Pigs. When it comes to Roy Sharland, I honestly just don't know - but don't be shy to drop us a line or two if you do, as I love his contributions here and would be delighted to know more.