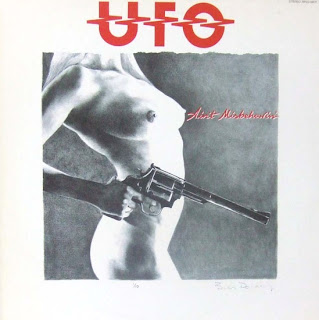 To be point-blank honest, UFO were already flogging a dead horse when "Misdemeanor" hit the shops in 1985, but they somehow managed to keep things going until 1989, maintaining a mostly very busy touring schedule and surviving through a carousel of personnel changes. The seven tracks that comprise this "Ain't Misbehavin'" mini-LP were actually recorded way back in 1986, soon after keyboardist / guitarist Paul Raymond decided that he had too much and left UFO behind for another number of years. Still, the recordings were temporarily shelved for some reason (have I heard someone whisper "label disinterest"?), while Phil Mogg and his cohorts kept the show on the road in order to make a living. Keyboardist David Jacobson is known to have joined the band soon after the recordings, but both him and bass player Paul Gray were no longer in the picture when the mini album actually came out in 1988: in fact, it transpires that Pete Way was back on duty by the time "Ain't Misbehavin'" hit the shelves, having been present in a handful of live performances a little time previously. Axeman Atomik Tommy M had also flown the coop by this juncture, and Myke Gray was handling the guitar in a few jaunts towards the end of 1987, though it seems he was no longer a member early next year too, having already left in order to form Jagged Edge.

Yeah, I know, it's all quite confusing, and this strange sequence of events even puts the wisdom of releasing "Ain't Misbehavin'" into question - let's face it, even if it was a kick-ass record, it would still be hardly a good picture of the current state of affairs within the group. Recorded without a dedicated keyboardist, this one turns out to be a considerably more basic and intense affair than the sugar-coated "Misdemeanor", with some pretty healthy doses of heavy riffing here and there. In fact, more charitable listeners may even consider this mini-LP to be something of a return to form after their 1985 flop, as the lads are definitely rocking harder and showing a lot more conviction this time around. If you're partial with the 1980's aesthetics in general, this one may strike the right chord with you, so it's not like we're dealing with a worthless pile of garbage or anyhing like that.

Still, it leaves a lot to be desired in the songwriting side of things, as most songs are so formulaic that you can play Nostradamus and easily predict what is coming next. Despite some healthy doses of energy, "Between a Rock and a Hard Place" has such a clichéd chorus that you probably already know how to sing it, even if you never heard it before - there's even the seemingly obligatory let's-pause-the-rest-of-the-band-and-leave-just-the-drums-doing-the-beat part towards the end. Tunes like "At War with the World" and "Rock Boyz, Rock" are way worse though, with terrible choruses, overwhelming backing vocals and a pop metal vibe that screams 'dated' with every single note. CD bonus "Lonely Cities (of the Heart)", on the other hand, is simply too nondescript to leave any lasting impression, a song that comes and goes without causing any perceivable emotion at all.

Personally speaking, the only song that really got me on this one is "Another Saturday Night", an intense semi-ballad with decent lyrics and some very imaginative melodies. Apart from this strong highlight, I guess "Hunger in the Night" and "Easy Money" (despite opening with a cringeworthy 'let's go, while we're young!' screaming that sounds as convincing as a flying saucer photo from Billy Meier) are acceptable, though a few lightyears away from any 'undiscovered classic' scenario, if you know what I mean. Nothing to write home abouth though, and just too little to make "Ain't Misbehavin'" a worthy addition to anyone but the most enthusiastic UFO fans.

Phil Mogg always mentioned the mini-LP in lighthearted terms on interviews, regarding it as little more than a collection of demos that he felt worthy of release - a version of events that seems a bit at odds with the busy production job in some songs, but never mind. There's no denying the singer and his partners in crime were trying their best to get a good thing going when this batch of song was recorded, but it was also clear for all to hear that they just didn't have enough in them as a unit to make it happen, unfortunately. If "Misdemeanor" was already a hopeless cause from the start, there was precisely zero chance of setting the world on fire the second time around.

There was an active line-up of UFO in mid 1988, with the duo of Mogg and Way being assisted by Fabio Del Rio (D) and a certain Rik Sanford on guitar. The 4-piece were supposed to record an album, but this particular project didn't last the distance, and there's strong indication that the material they were writing may have never even got to the demo stage. Guitarists Tony Glidewell and Erik Gamans also seem to have been there for a little while, but their contributions were probably very fleeting if that was really the case, and I wouldn't be surprise if that was just a case of musicians being auditioned rather than a more serious commitment. Whatever the case, this can't even be described as a transitional period for UFO, as the group weren't really going anywhere for the concept of a transition to make sense. In the summer of 1989, UFO was pretty much dormant, and it stayed mostly that way until 1991, when ex-Stampede and Grand Slam stalwart Laurence Archer assumed the difficult guitar position, pointing to a minor (but very worthwhile) resurgence in the band's career.