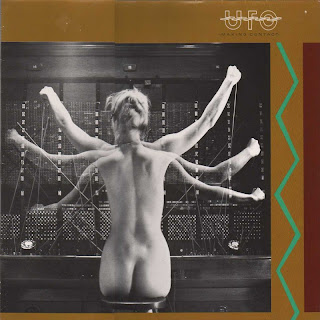 I guess no one would regard the early 1980's as a hugely successful period in UFO's career, but they were keeping things on track, you see, recovering from the very weak "No Place to Run" with two perfectly listenable slices of heavy rock music in the shape of "The Wild, the Willing and the Innocent" and "Mechanix". But, just after the good result in sales and the successful tour to promote the latter, UFO were hit by a major blow when bassist and founding member Pete Way decided to pack it up and go (pun intended, sorry) in late 1982, seemingly unhappy with the band's musical direction and tempted by the chance to join ex-Motörhead's "Fast" Eddie Clark in a new venture cunningly called Fastway. It's fair to say that, although he never really took the helms of the band as Phil Mogg did, his wild man lifestyle never (up to that point, at least) stood in the way of recording sessions or touring commitments, and his personality and vision seems to have been a more important cog in the machine than many would perhaps have expected. If surviving the absence of Michael Schenker was a hard task (and it took them a while to recover, mind you), moving forward without their much-loved bassist would be a more intricate puzzle to solve - one that they simply didn't manage to handle in the short run.

Already working on the pre-production for a new album, UFO decided to make things simple, with ever-dependable multi-instrumentalist Neil Carter and guitarist Paul Chapman both assuming bass duties in the recording sessions of what would become "Making Contact". Now, Phil Mogg and Andy Parker were the only original members still in the act, and the singer found in Neil Carter a fruitful songwriting partnership, the pair dividing credits in almost all songs here featured. Their collaboration had shown many signs of promise on "Mechanix", and some of those are fulfilled here, at least to some extent - but it seems the task of making a full album on short notice and pretty much on their own, added to the pressures of a market leaning towards more accessible waters, turned out to be a bit too much for those involved, a state of affairs that gives "Making Contact" a pop-metal outlook that was significantly different from (and less interesting than) its predecessors.

Now, I don't want to be rude and say this record is a piece of crap, because it surely isn't. I even dare to say it's better than "No Place to Run", for instance: at least they were trying to get something going here, while they sound like they couldn't care less in their 1980 minor fiasco. Maybe releasing "Making Contact" was little more than a contractual obligation to UFO, but I'd say they made a very serious effort to fulfill it with considerable finesse, rather than just churn out some substandard drivel to get rid of it as soon as possible. In fact, things get to a reasonably powerful start with "Blinded By a Lie", and following track "Diesel in the Dust" is my favorite tune here by far, with very effective instrumentation and poignant lyrics about a small town petty criminal who meets his end in a pick-up truck. If every so-called pop metal had such depth and energy, I would never say a bad word about it, you know. Things keep going well with the more restrained, very melodic "A Fool for Love" - a song that reminds me of Thin Lizzy, which is never a bad sign at all.

But perhaps it would have been better to keep this record as an EP or maxi-single, as things get perilously out of steam from this point onwards, with perhaps only "The Way the Wild Wind Blows" and "All Over You" coming to the (very moderate) rescue. "You and Me" is a very poor ballad that even sounds half-finished, and supposedly upbeat songs like "Call My Name" and "No Getaway" (some tasteless lyrics about a stalker on this one BTW) sound tired even before they get going properly, which is hardly the intended effect, I'm afraid. "When it's Time to Rock" is a poorly resolved song that never gets off the ground properly, and final track "Push, It's Love" is an extremely clichéd 'high-energy' rocker that sound as legitimate as a 6-dollar bill, if you ask me. The attempt to coat these half-baked tunes with layers of sugary keyboards does little in the way of making them more palatable: instead, it renders the album even more difficult to listen to in one sitting - a bit like those children's parties, you know, when you already had too much candy and there's still half a cake to go.

Whatever way you choose to look at it, "Making Contact" was a clear indication that UFO's ability to create magic was rapidly fading out. The reception to the record was underwhelming, to say the least, and the European tour that followed (with Billy Sheehan, then still a feature on Talas, assuming bass duties) was something of a disaster, with lots of internal friction and some poor perfomances to match. After a serious brawl with the audience in Athens, Greece, the rest of the jaunt was quickly cancelled, and UFO were pretty much falling apart on their return to England. They somehow kept it together enough to fulfill a tour on England, with Paul Gray (an old associate to Eddie and the Hot Rods and lately involved with The Damned) assuming as a bassist, but it was clear for all to see that the road had come (at least temporarily) to an end.

Paul Chapman relocated to USA to form DOA (he would soon join forces with Pete Way on Waysted, though), while Neil Carter joined Gary Moore and Andy Parker also decided to move to USA and form a venture called Scarlett. Only singer Phil Mogg seemed to be uncomfortable with putting the good name of UFO to rest, and, after a necessary break in order to get himself together, he would soon be making tentative plans for a new lift-off of his much loved flying saucer. As for "Making Contact", it's one for dedicated fans, that's for sure, though these may find it more appealing than my somewhat cynical review seems to suggest. There's no reason to bother if you're a more casual listener, though, as it's not an underrated classic by any stretch of the imagination.