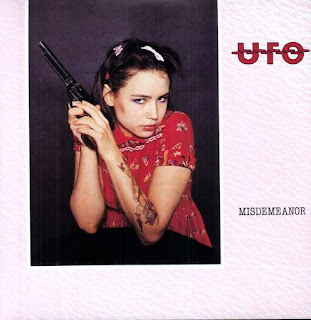 As UFO themselves would put it (in the lyrics of their minor 80s hit "Let it Rain"), some kinds of love can only last so long. There was always a certain level of friction going on among the band members during most of the 70s, culminating in the acrimonious break-up with axeman Michael Schenker in 1978 - and a similar scenario was going on roughly by the time "Making Contact" hit the shops in 1983, with many stories about bandmembers reaching for each other's necks on a weekly basis. After a disastrous performance in Greece (when, according to then stand-in bassist Billy Sheehan, Phil Mogg was inebriated to the point he could barely sing, and Sheehan himself sustained injuries when the audience started throwing stuff towards the stage), it was clear for all involved that the off-the-rails lifestyle often associated with the band had just gone too far, degenerating into something ugly, embarassing and plain unprofessional. After fulfilling their touring obligations in the UK, all members went their sepparate ways, and this long-serving flying saucer was laid to rest for a while.

But not for long, though. Perhaps unconvinced that disbanding UFO was the right move (or else simply bored with doing nothing special after relocating to Los Angeles), Phil Mogg would soon start recruiting a new set of accomplices in late 1984, allegedly to create an all-new musical entity. After listening to a few songs written for a band called Sing Sing, Mogg felt that Paul Gray (who performed bass duties during the very last shows  of the "Making Contact" tour) could be a good songwriting partner after all, and swiftly recruited him for the new project. After enjoying stints with the Michael Schenker Group and Waysted, old time keyboardist / guitarist Paul Raymond was more than happy to join Mogg in the fun, and a nearly unknown (but clearly very talented) axeman named Tommy McClendon seemed the perfect choice for the lead guitar. Following a brief period of experimentation with Diamond Head's Robbie France, the drumstool would be occupied by Jim Simpson (ex-Magnum) to complete the line-up. The 5-piece toyed with The Great Outdoors moniker for a while (a hopeless choice, to be honest), but a few conversations with influential people in the business convinced Phil Mogg that it would be better to bring the well-known UFO name and logo back for good - a wise move indeed, as soon Chrysalis would offer the lads a much welcome one-album deal.

If "Misdemeanor" would have been more adequately presented under another guise is something that is open to debate. Personally speaking, I guess it wouldn't have made that much of a difference after all: on one hand, the material herein doesn't sound that different from what UFO were doing in the early 1980s, and it's also not strong enough to propel any newly-christened acts to immediate superstardom, if you know what I mean. Now embracing 1980s commercial rock music in no uncertain terms, UFO recorded an album filled with the very same pop-tinged hard rock attempted by so many bands (mostly to no avail) roughly at the same time. Listening to "Misdemeanor" while comparing it to earlier UFO releases may be a frustrating experience, but it's also educational in a way, as it shows how much hard/heavy music as a whole abandoned most of its psychedelic and bluesy roots from the mid-1970s onwards, in order to embrace a more "modern" and straightforward outlook and sound -  a crossroads that ultimately led either to extreme music (as death/thrash metal and many variants would happily testify) or else to unashamed commercialism, UFO being one of many examples in that regard.

I really don't feel like talking in depth about the musical merits of "Misdemeanor", to be honest - not because I think it is a despicable record (I honestly don't), but mostly due to the fact that it is hopelessly dated and lacks any relevance for the general metal scene whatsoever. Granted, it does have its moments: "Night Run" is charming, a song that wouldn't be out of place in any UFO album from the early 80s, and tunes like "Heaven's Gate" and "This Time" are perfectly listenable too. Most of the package is totally innofensive though, with riffs that are little more than sequences of chords and puerile lyrics about love and heartbreak that Mogg probably came up with in a few hours at most (believe me, he can do so much better than this). The production stylizes the whole thing to a great extent, with overwhelming keyboards, a near-robotic drum sound and featherweight guitars that never threaten to get intense, let alone heavy. McClendon (here assuming the nickname Atomik Tommy M for some reason), despite being undeniably a gifted guitarist, sums it all perfectly BTW: his shredding was probably very impressive in 1985, but I seriously doubt it could raise any eyebrows today, and it's significantly dwarfed when compared to what Michael Schenker and even Paul Chapman did before him.

I know I have used the word 'hopeless' before, but allow me to repeat myself, as I think it's the perfect way to say it: "Misdemeanor" is a hopeless album. Not an unashamed cash grab, or a half-hearted effort from musicians that could not care less - just an LP that screams 'middle of the road' from start to finish, a product that tries so hard to be acceptable for its time that it turns out to be completely devoid of any distinctive and/or memorable features. In fact, it's hard to fathom what plan (if any) those involved with this project had in mind for it, as I seriously doubt radio stations were falling over themselves to give it airplay, and I'm sure MTV wasn't really impressed either. It gets a two-star rating because the musicianship is very competent and the results are professional as a whole, but you don't need it in your collection unless you are a UFO completist, believe me. Some bands from the 70s did way worse, that's for sure, but that is not to say that UFO should be proud of this record.