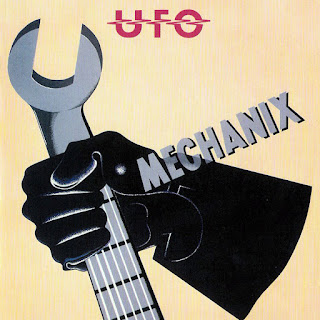 Oh man, this one brings back some memories. Not that I was around when it first came out in 1982 - actually, I was less than two years old, being raised by a loving family in the southernmost Brazil, so it's not like I was playing an imaginary guitar at some UFO concert in England or anything like that. But "Mechanix" is actually the first album I bought from UFO: a japanese CD reissue by Chrysalis, which I guess was pressed in the early 1990s and cost me some serious money (well, for a cash-strapped adolescent like myself, anything more expensive than a pastry and a Coke would qualify as 'serious money' at the time). I took it home with no more than a vague idea of its contents; I was curious about UFO for ages, and the simple (but eye-catching) front cover really excited my curiosity, but I had never heard any full songs from them up to that point. I bought it on a Friday afternoon, but only got a chance to listen to it on early Saturday morning - and I couldn't crank it up, you see, or else my family would be disrupted in their sleep.

It was... different from what I expected. In my mind, a band with the name UFO was supposed to be heavier, and the use of keyboards and saxophones really caught me off guard. But I liked it. I really did. And I still do, nearly 25 years later. I still have the same CD, by the way.

Now that I'm thinking of it, I remember the record store owner telling me that "Mechanix" was a good record, but I should take "The Wild, the Willing and the Innocent" instead, because it was way better (there was no other UFO albums in stock, unfortunately). But I didn't like WW&I's front cover or something, and opted to buy that hand with a guitar turning into a monkey-wrench - like it was a piece of art worthy of the Tate Gallery or something, but never mind. And it's a choice I still make to this day: nearly everyone seems to consider WW&I a more accomplished album in comparison (and I totally understand the reasoning, I really do), but "Mechanix" still touches a soft spot in my soul, and I like it better to this day. It's like my mind knows I'm wrong, but my heart just won't let go!

New boy Neil Carter seems way more confident this time around: not much more than a support musician in the previous LP, he comes out as a talented composer on "Mechanix", his input resulting in a number of very interesting pieces of music. With the 5-piece finally reaching some stability after a few years of internal turmoil, and adding Carter's many ideas into their songwriting cauldron, UFO were strong and focused enough to capture much of the spirit of the hard/heavy scene in those days, walking the thin line between intense and radio-friendly with mostly very effective results.

There's a hell of a lot of keys in here (I even reckon it was the more keyboard-oriented UFO album so far), but I don't consider it to be obnoxious or obstrusive, as Carter is mostly rocking along with the rest of the band rather than trying to soften the whole thing. The excellent "Doing it All for You" is a prime example: there are multiple keyboard layers, but they sound intense, even (yeah, I know how strange it sounds, but it's all true) HEAVY towards the end. The saxophones on "The Writer" (playing along with a riff that wouldn't be too out of place in a late 80's Black Sabbath album, which is hardly a well-worn formula if you ask me) and the cover of Eddie Cochran's "Something Else" may be hard to digest for some, but I think the results are mostly charming, though the wisdom of opening the record with these two tunes in sequence may be called into question.

There's a bit for everyone's tastes here, from the NWOBHM-standard-approved drive of "We Belong to the Night" and "Dreaming" (the latter a truly excellent song, perhaps my favorite from the entire record) to some concessions to balladry ("Back Into My Life"), including some pinches of radio-friendly rock (in the shape of the very competent "Let it Rain") and all-out hard rock ("You'll Get Love"), all being pretty serviceable most of the time. Actually, both sides of the original LP are quite formulaic when you take a close look at it: a forceful semi-metal number opens proceedings, then an easy-listening rocker comes in, followed by a ballad, a no-frills hard-rocking tune and a slightly more adventurous track to round things off. The aforementioned "Something Else" is actually one of the least interesting recordings of the lot: this classic rock and roll song is a lot of fun of course, but the addition of multiple unnecessary layers in the mix ended up rendering the track a mess, if we're to be honest here. Similarly, "Terri" is the one instance when the keys get a bit on the listener's nerves, harming what would perhaps have been a nice heavy ballad under different circumstances, and "Feel it" is a brain-dead hard rocker that really doesn't get anywhere. Apart from this, though, "Mechanix" is mostly a secure and funny ride, carried along by efficient instrumentation and a nice, powerful performance from Phil Mogg - his voice really shines in tunes like "Dreaming", "Back Into My Life" and "The Writer", believe me.

The release was a remarkable success for UFO in their native UK, reaching number 8 on the charts - their best-selling LP of all time in the country, no less. "Let it Rain" was a minor hit as well, and it's fair to say the group were rejuvenated enough to hold their own amongst the iron maidens, saxons and def leppards of those very competitive days. Still, "Mechanix" was the harbinger of decadence, rather than renewed relevance: let's face it (and I'm saying this mostly to myself), it's simply not in the same league with "Lights Out" or "Force It", and you can't compare this reasonably stable period in UFO's career with the resounding success that happened to Judas Priest (or, to a lesser extent, Motörhead) roughly at the same time. In fact, hard times were just around the corner for the lads, and this LP may as well be seen as the last decent moment they would enjoy for the best part of a decade. As a record, just take it for what it is (a fairly enjoyable collection of songs from a band trying to keep their thing together and not much else), and you'll probably get the best out of it.