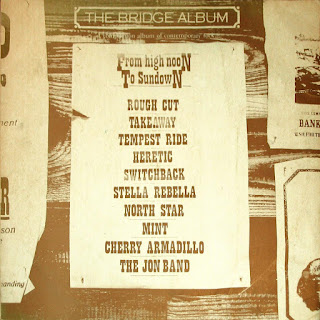 The local-band compilation phenomenon was quite prolific in the UK for most of the 1980's, being a seemingly inexhaustible source of amusing (and often bewildering) finds for the most go-ahead NWOBHM collectors. There's literally hundreds of such releases out there, many of those known to exist in terms of only two or three examples, and I'm convinced there are still a few currently-unknown curios just waiting to be found, hopefully including one or two long-forgotten metal ensembles we'll all love to learn about. Granted, "The Bridge Album" is not even close of being a recent discovery (it appears on collector's wants lists at least since the mid 1990s), but I still think it represents quite well such scenario, as it compiles bands from the most disparate musical styles, connected only by the use of the same rehearsal facilities - the Bridge Studios in Uxbridge, west London, that is. Released sometime in 1982, it just happens to have a fair percentage of hard/heavy acts on display (maybe the long-haired metal novices from the area just liked the studio sound more than hopefuls trying their luck with other genres, who knows), and that's precisely what makes it such a coveted item for British metal completists.

Though not an all-and-out metal track, Rough Cut's "Gunship" is a very acceptable collision between hard/heavy music and more standard rock 'n' roll, with simple-but-effective instrumentation and a truly commendable, punk-tinged vocal performance. Something like a metallic Rolling Stones, perhaps? Yeah, I know, it sounds downright absurd, but that's exactly what occurred to me when I first listened to this track. Maybe a slightly more hard rocking Cock Sparrer ("Running Blind in '84" era) or even The Shattered Dreams (if you ever heard their "Nothing Ventured Nothing Gained" effort, that is) would be more accurate comparisons, but it's still not quite there yet. Oh well, it's a cool, upbeat track all the same, opening proceedings quite nicely and easily one of the most interesting contributions throughout. It's a shame they never released anything else, at least to my knowledge, and I'd love to find more. If you good reader ever had anything to do with this long-forgotten combo, please drop us a line, will you?

Next comes Stella Rebella's "School Life", a new wave number with slightly forceful transitions in places, but with a weak chorus (and embarrassing lyrics about, well, how school sucks and all that) and a too-quirky-for-its-own-good song structure that doesn't work that well if you ask me. The female singer shows some promise, but I reckon they needed more time to mature before venturing any further. Nothing too exciting for headbangers anyway. Fortunately, Heretic's "In Time" brings a more solid musicianship to the table, not to mention a way more metal-friendly approach and sound. This atmospheric, melancholic number is a slow-building semi-ballad with many keyboard layers, that gets more intense as the song progresses and explodes into a emotional guitar showdown towards the end. Nothing to set the world ablaze, that's for sure, but easily one of the most accomplished compositions in the band's entire repertoire.

Switchback delivers some more new wave with "How You Made Me Cry", but we're closer to 1960's pop rock territory this time around. It's a pretty decent tune that fulfill most of its promises, and the quiet moment during the instrumental section is actually pretty cool, but the let's-repeat-the-name-of-the-song-ad-nauseam chorus is somewhat annoying, I'm afraid. Those who happen to enjoy some lightweight, semi-rocking tunes from time to time may want to give this one a try, though. And North Star doesn't let the ball drop with "It's Only Money", a mid-paced number that stars quite ominous, but soon shifts direction towards more hard-rocking territories. Another ultra-predictable songtitle-turned-into-chorus leaves a bit to be desired, but it's not that much a trouble this time around, as the guitar work is very effective and really carries the song along. If a slightly less metallic "Crazy Nights"-era Tygers of Pan Tang (or, say, a slightly more metallic UFO) is your cup of tea, then this track will surely do the trick.

Things weren't going that bad at all up to this point, but I'm afraid Mint's contribution ("Underworld") will be of little to no interest for most (if not all) rock audiences. Perhaps inspired by The Clash and their flirtations with reggae and ska, the lads open side two with a rasta attempt that is probably passable for those who can't get enough of "Sandinista!", but will hardly set pulses racing on anyone else. I don't want to be too harsh on them really, as we're nowhere near a disaster scenario here, it's only that I don't have enough knowledge about their style of choice to contribute with more meaningful observations. But fear not, as next comes Tempest Ride and their "Another Time, Another Place" effort, easily the best (and most NWOBHM-ish) track here featured. Actually, it's sure a NWOBHM classic, period. Recorded before they changed name to Lyadrive, but released only after such transformation, this catchy number has it all really: busy guitar work, nice melodies, astute tempo changes (most of all during the instrumental section), confident songwriting, charming vocals and a simple, yet truly memorable chorus. Sterling stuff, and soon they would gift the world some similarly high-calibre tunes under their new guise. If you're a NWOBHM collector with money on your wallet, this compilation is worth buying in merit of this track alone. Yeah, I mean it.

Unfortunately, The Jon Band's "Dressed in Cream" is nowhere near the high standard of the preceding number, being a pop-oriented new wave ditty with near-boogie guitar work and another unimaginative, sing-the-name-of-the-song-and-that's-it chorus. It may be a find of marginal interest for those who collect indie music from the early 1980's (if there are any), but hard/heavy music devotees are unlikely to want to hear it more than once. The following contribution comes from Cherry Armadillo (what a bad name choice, lads, seriously) and their bizarre "Cocaine Cocktail" number. A ever-present bassline and quirky, atmospheric guitar effects provide the backbone for the song, while a declamatory voice mutter some beatnik lyrics that barely make any sense at all. It goes on for a few minutes, then a slightly more lively drum pattern leads the song for an abrupt, seemingly improvised ending. I'm not entirely sure what they had in mind when writing this one, so I'll refrain from any serious criticism - but the fact that this is their only known vinyl appearance is hardly surprising, as I can't imagine many record labels beating a path to their door after listening to such an oddball. 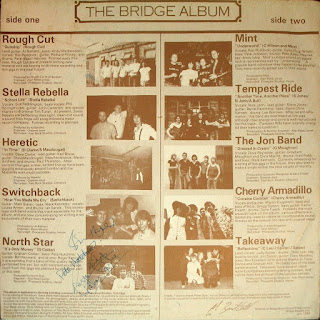 To round things off, the prog-rock oriented Takeaway brings the epic "Reflections", a semi-ballad that lasts for over eight minutes, but still manages to capture the listener's attention from start to finish. Don't go for it expecting stunning displays of technical proficiency or mind-blogging tempo changes: it's all about reiteration, striving to obtain emotional connection rather than provoking some adrenalin flow. The use of female vocals to counterpart the more prominent male singing is a charming idea, and adds nicely to the contemplative nature of the song. I'm sure some would prefer a more upbeat, rough-and-ready tune to close such a compilation, but I tend to think this pensive ending works quite well in the context, and keeps you thinking about what you just heard long after the needle runs upon the last groove.

As with most local-band compilations of the period, "The Bridge Album" had little effect on propelling its participants' careers. Bridge Records would retain two of the bands here featured, with both Tempest Ride (christened as Lyadrive) and North Star releasing 7'' singles for the label. These hopefuls didn't manage to last the distance after their exclusive slices of vinyl were pressed, though Lyadrive (one of the first obscure NWOBHM bands to really achieve cult status) revived their career in the second half of the 1990's. Heretic released the (rather inconsistent) "Burnt at the Stake" EP by Thunderbolt in 1984, but it was also a case of long hibernation before the belated adulation prompted them into a comeback that is still going on to this day. Otherwise, the initial piece of exposure also turned out to be the last, and none of the other acts on display got any further in the business, as far as I know - which is a shame in the cases of Rough Cut and Takeaway, at least. The latter, incidentally, claims in the liner notes to "have several record companies showing strong interest", which never came to any level of fruition, I'm afraid.

Despite a paucity on successful stories, "The Bridge Album" is an accomplished record when it comes to musical merits, being way more enjoyable than most similar records of the era, so kudos to those responsible for quality control. Few copies are known to have survived, and, unless an unsuspecting home clearance unearth some unplayed copies hidden in someone's garage, you'll have to be lucky (and wealthy) to ever add one of those to your collection. Oh well, I guess the vinyl rips available via p2p will have to do for the time being.

Special thanks to The Corroseum for picture sleeve scans!

Have you been involved with any of the bands mentioned here? Have any extra info and/or corrections? Please e-mail me (drequon@gmail.com) and let me know!
Postado por Drequon às 16:24