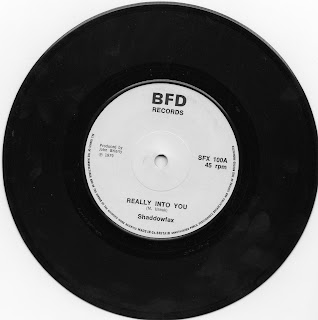 Now to a case of near-identical band names causing a bit of confusion. Dedicated NWOBHM enthusiasts sure know about Shadowfax, a bunch (from East Dulwich) that released a 7'' named "The Russians are Coming!" in 1980 and, despite being considerably closer to punk/powerpop territory than usual, still have a strong crossover appeal for 1980's-obsessed metalheads (I plan to review this one in the not-too-distant future, by the way). When the NWOBHM collecting scene began taking shape in the early-to-mid 1990s, interest for this obscure piece started to peaked, and some dealers came out with strange stories about an even earlier release, issued by the enigmatic BFD label in 1979. A few units were shifted for outlandish prices, but soon the truth of the matter was established: it's in fact another band (named Shaddowfax, with a double D, although it transpires it was a printing error rather than a conscious moniker choice) hailing from Bradford, West Yourkshire and with some sort of musical personality disorder if you ask me.

"Really Into You" is a laid-back tune with some noisy guitar in places, but too firmly rooted to mod / new wave / powerpop ground for most metal tastes, I'm afraid. It seems like it never gets going properly, and the listener is left waiting for a sonic explosion that never occurs. Not too bad, but nothing to write home about if you're not a powerpop addict, and just nothing to do with metal at all. Surprisingly, "Spare Wheel Driver" is a whole different story, both in terms of energy and style of choice. The (pretty cool) main riff definitely screams hard/heavy to my ears, and the overall feeling is not dissimilar to the boogie/biker rock/metal crossover material bands like Vardis and No Faith were writing and performing at roughly the same time. Maybe not the most ingenuous piece of songwriting about a fast-and-furious vehicle ever laid down on vinyl, but still a pretty respectable tune with a lot of replay value.

The disparity of styles is quite odd, and I tend to think this particular Shaddowfax (I'll spell it like this to avoid confusion, OK?) would have made a better choice by pairing "Spare Wheel Driver" with another biker-friendly, upbeat rocker, but what do I know? If you like NWOBHM as much as I do, it may be worth the effort to locate this esoteric 7'' by virtue of the B-side alone, as the backlash of a few unhappy buyers (who wanted to purchase items from the East London band and not some oddball namesakes) dwindled the prices of this particular item quite dramatically, and now it's entirely possible to buy it for a fair-enough amount of cash. Take the 2-star rating with a pinch of salt really, as "Spare Wheel Driver" is well worthy of attention. 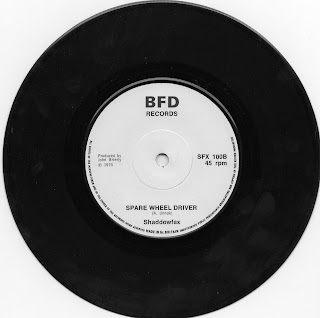 As for Shaddowfax, they went as far as to support none other than UFO in 1979, and it seems they also shared a stage with Def Leppard and Saxon, which gives strong indication they were (in heart at least) more of a hard/heavy proposition rather than anything more punk-oriented. Unfortunately, things fizzled out as rapidly as they peaked, and the unlucky four-piece disbanded sometime in 1980. Oddly enough, there's also a (remarkably elusive) CD-R out as well, presumably issued in the early 2000's and pairing the two songs from the single with a third track named "Maybe I'm A Fool". Apparently, this extra song was recorded during the same sessions for the single, which took place at Cargo Studios in Rochdale early in 1979. It looks like something put together by some former band member(s) for old time's sake, but it's not beyond the realms of possibility that it was the work of someone else who just happened to got hold of the original tapes somehow. The fact it is credited as "Shadowfax", with a single D, gives strength to the first option though, as someone who only knew of the single wouldn't be aware it was misspelled after all. Whatever the story, Allan Unnuk is still doing the rounds with a local combo called The Deltas, and efforts are being made to contact him, so perhaps we can all learn a bit more about Shaddowfax's career and offshoot projects. Fingers crossed!