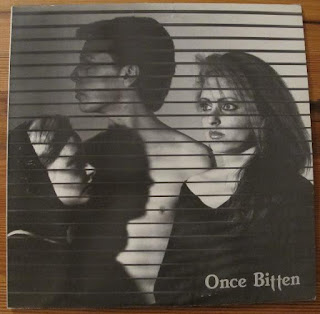 Not much to share as an insight when it comes to this "Once Bitten" release by Red Door Records (whoever they were), as the available copies present a distinct paucity on information regarding bands, recording dates or anything else. The year of release is not explicitly stated anywhere, but there's a detail on the plain white paper sleeve of some copies that reads "Made in England R.S. 1-84", so it's fair to assume it was at least pressed on 1984. Besides, some bands (most of all Trem) are known to have recorded and/or released stuff in 1983, so this particular compilation was probably out very early in 1984, assembled from recordings made on the second half of the previous year. Whatever the story behind this album lies (and if you happen to know anything, please kindly get in touch, as I would really like to know more), it was only one of countless local-band compilations that were very common in Britain during most of the 1980s, with a clear focus on indie rock/new wave hopefuls, but also giving some exposure to synthpop and downright pop acts. Fortunately, there's also a couple (slightly) heavier bands on display, so I guess the exercise of reviewing this one will be of some interest to NWOBHM collectors at least.

Let's start with the not-remotely-interesting-for-headbangers bands and move from there, shall we? Arc Connexion's "Bata Bata" is something of a ska/funk collision, or at least that's how it sounds to my ears - I'm no scholar in such music genres though, so I can easily be wrong on this. Not a good song anyway, and hardly recommended for rock fans of any kind. Ron Gandertons Conception's "Good News For Lovers" is also completely disposable if you're a rock fan, as it's an ultrapop number with infinite keyboard layers, a mini-moog, a saxophone and even some sweet female voices to make things even more saccharine. I wouldn't say it's hopelessly bad (maybe it could be re-recorded by Outkast or whoever is doing this kind of stuff nowadays and become a award-winning single, who knows?), but it's not my cup of tea really. This enterprising lad would contribute another song to the proceedings, "Dancing with My Shadow" (now as Ron Warren Ganderton), and it's a ballad with dreadful singing and strident backing vocals that will hardly do the listener any favors. Similarly, The Young Revelation brings some swinging pop rock in with "Emily", and I think that some acceptable guitar histrionics towards the end are not enough to make it remotely interesting for anyone but the least demanding Rod Stewart fans. And don't get me started on Flexi-J and their "So Fine" contribution, as I would have a field day listing all the things I don't like about this pop/rockabilly attempt and I don't want to be rude and/or unfair.

Many disposable horn arrangements are to come your way as you progress through the LP, and Life of Leisure's "Working Up a Sweat" is filled to the brim with it. It's one of the few songs with separate drums and percussion where you can actually listen to both (and they're actually doing different things, which is an achievement I guess), and the bass player is a truly gifted chap. But I'm afraid these good, promising musicians were working with a average-at-best composition, a hindrance that rendered their collective efforts kinda hopeless from the start. On the other hand, Kookoo Bazooka really should have given themselves more time to pick a better name for their band, and the slightly folky indie rock of "Tomorrows Just Another Day" is passable, but not much else. There's also Dimitrios (promising band name, but don't get too excited) and their ramshackle "Rain at First", a song that is truly confusing and lasts for less than two and a half minutes without ever threatening to make sense. Surprisingly, Blind Tenant's "In the Earth" reminds me of none other than Sonic Youth, to an extent it could had been released as a demo by a grunge outfit from the early 1990s and no one would know the difference. It's an OK tune, but a bit too faceless to leave any lasting impression, and I must say that the throwaway take-the-name-of-the-song-and-sing-it-over-and-over-again crescendo towards the end is downright annoying. Give it a try if you like garage rock, though.

There's also some tunes that, despite not holding enough heaviness to justify the NWOBHM tag, have some redeeming features that surely warrant a respectful replay. Street Aliens' "Intrigue Hell" starts deceptively, with some distorted guitar chords in a near-epic feel. But soon it takes a detour straight to new wave territory, although it actually reminds me a bit of The Clash in both song structure and vocal performance. Not bad really, though surely no metallic assault at all. "No Happy Ending" by Dance on Dance is a somewhat pensive New Wave effort with interesting bass lines and an unusual, atmospheric chorus. The singer shows some promise, and it will be a shame if he didn't manage to go further in the business. No horns will ever be raised while listening to this song of course, but it's good enough music nonetheless, and it may appeal to more broad-minded listeners.

Tier Garden surely loved keyboards, considering that their "Games in the Tier Garden" effort is coated with countless layers of it. Of course, what we got here is pretty standard new wave/post punk/indie rock stuff, but these guys did a good job when it comes to songwriting, with a nice (and not remotely obvious) chorus and a pretty engaging instrumental section halfway through. They sure overdid it when it comes to arrangements, but it's all pretty straightforward rock music when you take the excesses out of it. There's also "My Robotic Friend" by Trem, a synthwave band that seemed to have been true devotees to Devo's musical vision. If such description reads unpleasant to you, then you're well advised to steer clear of it - but I know for a fact that a few long-haired headbangers actually enjoy Devo way more than they like to admit (I honestly can't see any reason to feel embarrassed, but never mind), and I guess this simple-but-catchy tune may become a guilty pleasure to some of them. 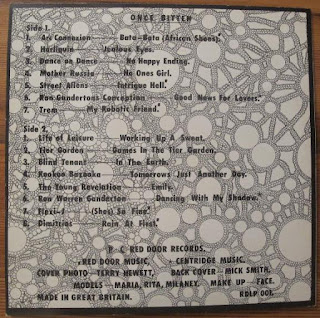 And now to the stuff you metalheads will most probably enjoy listening to on "Once Bitten", considering any of you will actually bother to locate a copy. It's only two songs out of fifteen, I know, but there you go. Mother Russia's "No Ones Girl" is a forceful enough tune, featuring a handful of elements well linked to the heavy metal imaginarium, such as twin-guitar riffing and some dramatic (and well crafted) solos. But look closer and you'll find out it's more of a crossover effort, with an undeniable new wave feel to it - although the chorus is something of a giveaway to the band's punk rock allegiances too, that must be stated. I like it actually, as the lads were surely trying to create their own brand of music rather than just emulating their idols. Maybe they could have deliver something really special in later years, if only given a modicum of encouragement. But the strongest point of interest here is Harliquin, with "Jealous Eyes" presenting some truly interesting riffing in places. There's actually quite a lot going on in the guitar department even before the voice starts, all reasonably heavy and with mostly good results. It's an upbeat and enthusiastic hard/heavy composition, even with a slightly glam-rocking feel in places and adding extra points to their cause with a genuinely catchy chorus. "Jealous Eyes" is not only the most metallic song here, but also one of the very best regardless of music styles, sure to strike the right chord with most NWOBHM fanatics.

Unfortunately, "Once Bitten" didn't exactly propel the bands involved to worldwide stardom, and most groups here featured uneventfully disappeared into oblivion in later years. Trem released a solitary, self-financed single in 1983, based around the same "My Robotic Friend" (c/w "Colour Vision"). Ron Warren Ganderton and his cohorts were doing the rounds for a number of years before this compilation was out, with a few slices of vinyl to their credit, but didn't seem to last the distance after this particular sample was out, as I couldn't find reference to any further releases. Curiously, there seems to have been a connection between Ganderton and members of bands as disparate as Quasar and The Pretenders (don't know if any of them took part on this one, though), so there's surely a bit of a mileage for those obsessed with the indie scene (not that any of them are reading this, of course). Tier Garden (a band I actually happen to enjoy, readers take note), apart from seemingly having released a single as Sits. Vacant in 1981, managed to release no less than three singles in the Cogent label, and some of the once-members still have a role in the music business to this day, so I think it ranks as a reasonably successful story.

Apart from that, though, "Once Bitten" is a collection of good intentions that mostly never came to fruition, and I suppose nearly all musicians involved returned to their day jobs soon afterwards, never taking part on any other recording acts of note. There's not much to really set pulses racing when it comes to NWOBHM, but nearly half of the songs are perfectly listenable, and I guess it's one worth picking up if you happen to find it in your local fare's bargain bin or something.

Many thanks to Discogs for picture sleeve scans!

Have you been involved with any of the bands mentioned here? Have any extra info and/or corrections? Please e-mail me (drequon@gmail.com) and let me know!
Postado por Drequon às 05:24