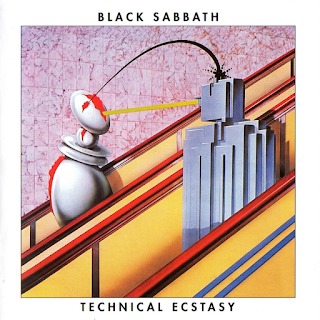 If our intention was to resume "Technical Ecstasy" in a single sentence, perhaps we could say it is a very confuse musical result of very confusing times for Black Sabbath. After a long string of legal battles with their former management (please kindly read the lyrics of "The Writ" to grasp just how much acrimony was going on), and having to deal with all the consequences of unbridled substance abuse, the nucleus of Iommi, Osbourne, Butler and Ward were beginning to drift apart. Under such circumstances, the music is most likely to suffer - and if they somehow managed to record a kickass album with "Sabotage", they wouldn't be so lucky next time around. Being already labelled by some of the press as a band bound to crash and burn, and in a period of time when soft rock bands like ELO, The Eagles and Foreigner were the flavour of the month, perhaps Sabbath thought that a less furious, more flamboyant and varied approach would be the right move. Turned out it wasn't, unfortunately.

Opening number "Black Street Kids" is a something of a (back then) modern hard rock song, and it even hints to some avenues Ozzy Osbourne would late explore in his Blizzard, though I'm sure it's not a case of direct offspring at all. It's more of a case of trying to understand the mood of the times and absorve it into their own sound, something that Ozzy would also do in his solo career and which is very commendable, I guess. The results are not truly bad, some may even enjoy it when in the right frame of mind, but it sounds mostly generic and short on personality - and let's face it, Black Sabbath did not made a name for themselves by being predictable and faceless at all. If it was written by a bunch of newcomers inspired by Black Sabbath, most of us would perhaps have a more sympathetic first impression; being a song from Black Sabbath themselves, it turns out to be a disappointing effort, as simple as that.

I wouldn't ever want to be rude with one of my favorite metal bands, but the not-remotely-encouraging description above fits like a glove to most of the songs here featured. "Technical Ecstasy" is a hit-and-miss affair, but the misses are far more common, something in no small part due to a perceivable lack of focus and inspiration. Heavy rock bands flirting with funk music wasn't exactly unheard of (Deep Purple and Atomic Rooster, to name a few, were doing it roughly at the same time), but "All Moving Parts (Standing Still)" is a contrived and insecure attempt to make such a bridge, whereas "It's Alright" turns out to sound like an unconvincing blend of Elton John with The Beatles, though I'm sure it wasn't what they had in mind. And don't get me started on "Rock 'n' Roll Doctor", which would be quite a bad song on a Kiss album, so I think you get the idea. It seems there never was any conviction on what direction the album should follow, so it should come as no surprise that "Technical Ecstasy" never gets anywhere at all.

It's not all bad of course, as these guys wouldn't be able to write a horrible album from start to finish even if they wanted to. "You Won't Change Me" is actually good, a somewhat surprising and competent attempt to write a heartfelt blues rock with synths all over the place, which surely counts as a highlight from this LP. "Dirty Women" is even more impressive, with a extremely pleasant succession of catchy riffs and leads in the finest Iommi tradition - no surprise it still makes its way to the band's setlists to this day. Even some less impressive tunes like "Gypsy" (with a pretty unexpected, almost grandiose interlude to liven up an otherwise forgettable funky-rock song) and "She's Gone" (a well-written ballad full of interesting arrangements, but ultimately ruined by brain-dead lyrics and a very weak performance from Ozzy) have some redeeming features, so don't dismiss them straight away. But still the record fails where it should have succeeded, as it hardly revitalized their dwindling reputation, a scenario that the punk rock influx would only further deteriorate. Where bands like Judas Priest and UFO managed to reinvent themselves into the 1980s, Sabbath were skidding at first - and the final record from the original four-piece collaboration ("Never Say Die!") would be far from enough to salvage the situation. Such is life.