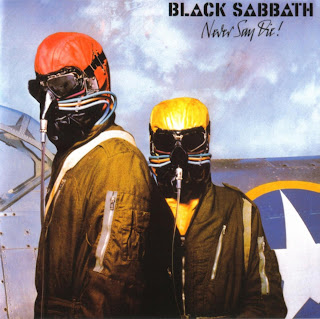 In a sense, "Never Say Die!" is not only the last product from one of the most brilliant line-ups rock music has ever heard, but also presents the conclusion to a process that took away almost all of the band's original doom-and-gloom outlook and bite. Things were going bad inside the band: Ozzy Osbourne abruptly flown the coop in late 1977, forcing the band to go with Dave Walker (ex-Savoy Brown) as an immediate replacement. Soon Ozzy would be convinced to come back though (after some strong insistence from Bill Ward, as it seems), when the band was already hard on work writing a new album. Most of the already finished compositions were scrapped, and the writing and recording process of what would become "Never Say Die!" ended up being done in quite a rush as a result. The never ending grind of drug abuse, intense touring and legal imbroglios surely took a toll on the musicians as well, and it's plain for all to hear that the entity known as Black Sabbath was quickly fading out of sight.

When a song like "A Hard Road" comes out of the speakers, with its multilayered choruses and cheerful rock-and-rolling vibe, one is left to wonder where all the ominous atmophere from the early days of the band had gone. It's not atrocious, see: it just sounds wrong, mostly because it is not the Sabbath we learned to love. Black Sabbath were never about being convoluted or unfathomable, but they aren't about being easy going either: they are supposed to sound at least a bit mysterious, there is a kind of intimidation we expect them to generate, and it's a uncanny absence throughout this LP.

It's now widespread knowledge that, to finish the album as scheduled, the band would work hard on a given composition during the day to record it the same night - hardly the most adequate way to do things in a studio, you know. It comes as no surprise that some tunes are half-baked and disjointed, sounding way more like snippets of music pieced together rather than compositions properly developed to their full potential. "Junior's Eyes", for instance, seems to move aimlessly over an underdeveloped semi-jazzy backbone, its heavier bits having no emotional connection with the rest of the song, while "Johnny Blade" wastes some pretty good ideas (the "what will happen to you, Johnny Blade?" part really sticks to mind) with unnecessary synth arrangements and unconvincing transitions. Bill Ward actually does his best to glue all parts of it together with countless drum rolls, but to little avail. The magnificent riffs are mostly gone, and even when we have a promising guitar opening to capture our attention (like in "Breakout") it is ultimately marred by some ill-advised experimentation - in the above mentioned case, a truly pointless sax solo, which is pretty much all the track is about, God knows why.

In an album full of misfires, "Air Dance" is a surprising highlight: carried along by very prominent synths and keyboards (performed by multi-talented Don Airey), it creates an intriguing, evocative atmosphere which truly captures the listener's attention, developing into an intense (though far from actually heavy) final instrumental section. Pretty cool indeed, and perhaps it could have been a trail to further explore had the band survived disintegration. The title-track is OK too I guess, though its euphoric nature seems a bit too over-the-top to be entirely convincing, like they were simply trying too hard to disguise their own lack of enthusiasm with the whole thing. Other than that, there's very little to write home about: even decent tunes like "Swinging the Chain" and "Shock Wave" lack fire and distinctive ideas, being almost instantly forgettable as a result.

As a whole, "Never Say Die!" is an album that screams 'end of the line' from start to finish, and I'm sure that Ozzy Osbourne's final departure was a relief for everyone involved - most of all the man himself, as he sometimes sound like he just couldn't care less. All things come to an end, and I guess that Black Sabbath Mk 1 had already given us more than enough to justify their run. Both parties managed to move on quite well actually, as Ozzy embarked on a very successful solo career and Ronnie James Dio relinquised the mike stand with a bang, as a single listen to "Heaven and Hell" will be more than enough to demonstrate. Some fans never gave Sabbath a chance after Ozzy left, treating all their later releases as a lingering embarassment; as for me, I'm grateful that Iommi, Osbourne, Butler and Ward changed the world for the best while they were together, and I'll never be able to thank them enough for that.

Have you been involved with any of the bands mentioned here? Have any extra info and/or corrections? Please e-mail me at drequon@gmail.com and let me know!
Postado por Drequon às 18:22