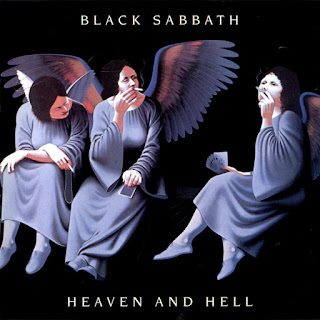 Saying that future wasn't looking bright for Black Sabbath back in 1979 would be a glaring understatement. Engulfed by near-incapacitating substance abuse, the creative fire of the original four-piece was clearly burning out, and there was a near consensus of opinion that Sabbath was flogging a dead horse at this point. The firing of Ozzy Osbourne must have been something of a temporary relief for the other lads, as his lack of commitment was increasingly jeopardizing the whole band - not to mention a much-welcomed fresh start for the man himself, as his platinum-selling solo career admirably demonstrates. But I'm sure the remaining musicians soon realized there was still no new record to offer, and the additional challenge to find a suitable replacement for their charismatic ex-singer may have left them scratching their heads, trying to figure out what to do next. Fortunately for all those involved, they made the right choice: Ronnie James Dio, unemployed after lending his pipes to Ritchie Blackmore's Rainbow for a number of years, turned out to be the breath of fresh air that would completely re-energize the Sabbath brand. Something that "Heaven and Hell", the first studio product of such collaboration, materialized in truly striking fashion.

As soon as "Neon Knights" explodes out of the speakers, there's little room for doubt: Black Sabbath is back with a vengeance. It sounds immediately impressive, heavy, menacing and full of genuine, vicious enthusiasm. It took them a few misfires and a drastic change in line-up, but this single track shows Black Sabbath finally finding their place into the renewed metal scene of the early 1980s. I mean, if so many newcomers were still learning their heavy-rocking trade, someone should be teaching them all how it's supposed to be done, and who could do it better than Sabbath? Even when the unmistakeably heavy approach of most songs is temporarily left aside in favour of a more rock and rolling vibe (like in "Lady Evil" and "Walk Away") it never comes as a detriment to the album's merits, as such efforts are strongly connected with the heavier cuts by a newfound sense of conviction. By fully embracing their role as heavy metal pioneers, Black Sabbath relieved themselves from the self-imposed (and ultimately futile) distraction of pointless reinvention. And once these guys have a purpose, you better stay out of their way, you know.

At least half the songs here featured are undisputed classics, easily ranked among the finest songs ever written by the group. The aforementioned "Neon Knights" is a scorcher, but "Die Young" is not too far behind, with unexpected (but still very catchy) arrangements and a soft, synth-based middle section that only enhances the overall sense of unrelenting heaviness. "Children of the Sea" is a more melancholic, evocative number filled with lyrical images of some sort of dreamworld gone wrong, a tune that moves slow but constantly from mellow to ominous and creates a huge atmosphere, abruptly (and brilliantly) broken by the fantastic "look out!" final bit. Truly terrific stuff. And "Heaven and Hell" (the song) showcases one of the finest riffs Tony Iommi ever wrote - automatically turning it into one of the greatest themes for guitar ever gifted to the world. The fact that perfectly good tunes like "Wishing Well" and "Lonely is the Word" (both would easily be highlights in most metal albums of that year) pale significantly in comparision with such metal behemots is to say something about how inspired and focused Black Sabbath were this time around.

The band sounds refreshed, with Tony Iommi bringing his finest collection of riffs and leads in quite a while and Geezer Butler doing a hell of a good job as well, his commanding basslines becoming something of a blueprint for metal bassists to follow from that point onwards. Bill Ward's performance is less impressive perhaps, but he succeeds in adapting his typical free-flowing approach to drums to the more precision-demanding outlines of most songs. And Ronnie James Dio sings beautifully throughout, providing Black Sabbath with the only substitute to Ozzy Osbourne there could ever have been: someone with a distinctive and powerful voice of his own, able to move the band forward without trying to follow Ozzy Osbourne's footprints. I'm not really in love with some of his sword-and-sorcery, pocketbook-fantasy lyrics, but Dio relinquished the mike stand like arguably no one else would, and only the most hardcore Ozzy-Sabbath fans ever dared to question his position.

It would be quite a rapid ride for Black Sabbath Mk 2: less than four months passed from the release of "Heaven and Hell" until the departure of Bill Ward, caused by deteriorating physical and mental health due to alcoholism. On the other hand, Ronnie James Dio's tenure with Sabbath would last little more than three years in total, the singer opting to pack his bags after some ego clashes with Iommi and Butler. Still, there was enough time for a second studio release (the pretty decent "Mob Rules") and a not very successful (albeit entertaining enough) live album ("Live Evil"), so I guess they made the best out of the partnership while it lasted.

If you don't own a copy of "Heaven and Hell", stop whatever you're doing (reading this review, I guess) and go get it straight away. It's not as world-defining as "Paranoid" nor as hugely impressive as "Master of Reality", but it's every bit as good, believe me. No metal collection is complete without this top-drawer masterpiece.

Have you been involved with any of the bands mentioned here? Have any extra info and/or corrections? Please e-mail me at drequon@gmail.com and let me know!
Postado por Drequon às 14:07