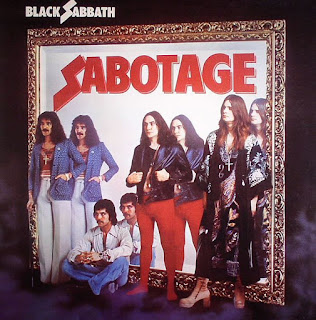 It is a near consensus today that "Sabbath Bloody Sabbath" is a great addition to the original quartet's legacy, and some would even go as far as to consider it the last essential record from the band's entire catalogue (though I don't agree with their reasoning at all, readers take note). But it didn't seem to be such a certainty back in 1974, as "Sabotage" was acknowledged back then as something of a rescue, an attempt to bring back the original heaviness that was getting softer along the way - something that even band members admitted on a number of occasions. I really can't see why, as I can hear a lot of the avenues opened by "Vol. 4" and further explored with "Sabbath Bloody Sabbath" being drawn to a logical conclusion on "Sabotage". It is indeed a heavier album than its immediate predecessors, but it achieves so by being more challenging and uncompromising than ever before, surely a step forward rather than a step back. And it sounds awesome most of the time, no doubt about that.

"But it's not proggy Sabbath anymore!", I can almost hear you saying. OK, "Sabotage" takes a more conservative approach when it comes to experimentation, but loses very little in atmosphere and manages to create a more organical mix of Sabbath's trademark sound and the less predictable song structures of prog rock. Actually, tracks like "The Writ" and the truly excellent "Megalomania" are pretty similar to what we had heard on earlier tunes like "A National Acrobat" and "Under the Sun" - only a tad heavier and, let's say, radical in its solutions. Everybody mentions "Symptom of the Universe" as one of the most aggressive songs ever written by Black Sabbath, and rightfully so; but perhaps even more important is the shrewd contrast between the furious opening and the acoustic dynamics of its final section, such apparently disparate elements complementing each other quite nicely. Not to mention instrumental piece "Supertzar", where heavy riffage, string arrangements and the London Philharmonic Orchestra are put together to truly striking results. This is the main strenght of Black Sabbath's sixth studio effort: it's really heavy, one of the heaviest they ever did, but it's also as complex and challenging as they could possibly be. They make no concessions, neither to the charts nor to their less demanding fans: they just take every idea to the last consequences. It's bold, it's uncompromising, and it kicks major ass.

In fact, such is the no-shits-being-given approach here featured that "Am I Going Insane" (the most accessible tune by far) was complemented with a "(Radio)" subtitle to make its peculiar nature even less debatable. No controversy here folks, it's just a minor sellout, let's all get over it and move on with our lives! Unfortunately, it is indeed one of the weaker tunes Sabbath ever recorded, with kinda ramshackle synth arrangements and an extremely dull and repetitive chorus that sticks to your mind for all the wrong reasons. No doubt it was included for the sole purpose to give their record label something to repackage as a single, but I guess it could have been kept out of the full LP, as it really disrupts the listening experience.

Fortunately, there's more than enough good music around here to keep things interesting, and a lot of good performances to make our day too. I'm not afraid to say that this album present some of the finest individual performances from all four musicians, most of all Ozzy (his singing in "The Writ" and "The Thrill of it All" are no less than supreme), but to no detriment of the other guys. The drums on "Symptom of the Universe" are great throughout, Geezer shows a lot of unsuspecting skills on "Megalomania", and the outstanding "Hole in the Sky" present some of the most biting guitar work Tony Iommi ever penned in his life - and it is to say something about how good it sounds, believe me. In a sense, it's the last time we listen to the original Sabbath as a proper band, as everything would fall apart pretty quickly on future releases - they are still a unit, focused and full of determination, and listening to these four lads at the top of their game is always something to savour.

I completely fail to grasp why "Sabotage" is held in considerable disregard by most critics - not to mention the band themselves, as they kept it totally out of the setlists since their reunion in 1997. Perhaps all then-ongoing legal fights with former manager Patrick Meehan are too attached to the compositions for comfort (I'm sure the angered vibe of many songs have a lot to do with that), so I guess it's understandable that they won't have fond memories when revisiting it. Still, this LP is yet another memorable collection of songs from one of the most significant bands in the history of rock and roll, so let's give it full credit for that.

Have you been involved with any of the bands mentioned here? Have any extra info and/or corrections? Please e-mail me at drequon@gmail.com and let me know!
Postado por Drequon às 19:15