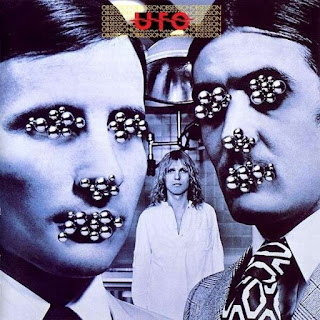 It's a common (and mostly very correct) assessment to say that UFO were one of the main inspirations for what would later be known as the NWOBHM. But saying that our much beloved flying saucer of a band  were something of natural forerunners of the British Metal scene of the 1980s is a bit over-simplistic if you ask me, just as labeling NWOBHM with a 70s-metal-plus-punk-rock tag, or implying that the heavy rock scene was 'dead' during the height of the punk rock phenomenon. The evolution of music is anything but simple, and I honestly don't think you can hear "Lights Out" and the following LP "Obsession" without acknowledging the sensible changes from one record to the other, unless you're not really paying attention. It was the end of the 70s - the end of the century, as Ramones would put it less than two years later - and the smell of the 1980s was already all over the place. And UFO sniffed it.

To be fair, similar bands like Judas Priest, Scorpions and Budgie were also right in their sense of smell, all showing a clear understanding that a new mood was around the corner - a mood for uncomplicated songs, less experimentation and a more down-to-earth (and less thoughtful) lyrical approach. There's precisely zero doubt that the punk rock influx had a lot to do with that (and Judas Priest, for instance, didn't shy themselves from admiting it in later years), but I still think it's more of a common perception, an incoming ethos if you prefer: let's make things as simple and direct as we can, so our songs can have an immediate impact and it will be easier to get our point across. It's not like Dee Dee Ramone or Johnny Rotten made an informed interpretation of the times and boldly decided it was time to reinvent the wheel; I'm personally more inclined to think they were just reacting to a collective unease, and talented enough to translate it into sound and music.

It wouldn't be that hard for UFO to jump into the train of times to come, you see, as they were never that keen to experimentation in the first place. Furthermore, the forward-moving nature of most of their songs sure shared something of a connection with the keep-things-simple spirit of the times, so there was no need to reinvent themselves as so many rival acts had to do, with varying degrees of success. Still, it required a shift in direction, and, where "Lights Out" was a 70's album in sound and spirit, "Obsession" is almost ahead of its time in a sense, as it could easily have been released five or six years later without any major adaptations. The subtleties and musical adventures of its predecessor are almost totally gone, and back is the hard-rocking, street-level approach of earlier efforts - although, and it must be clearly stated, in much more concise and restrained (even radio-friendly) terms.

It works out fine to a great extent (it's not like so many NWOBHM stalwarts decided to mention UFO as an influence just to make the lads a favor, you know), but it also tastes of decadence to a certain degree - and even though "Obsession" is miles away from being a bad album, it's also sensibly inferior to its predecessors. Of course, much of the misfires must be credited to the growing tensions within the band, with Phil Mogg and Michael Schenker reaching for each other's neck on an almost daily basis, the guitarist's heavy drinking being the main topic of conflict. Such tensions would ubdoubtedly have a negative effect on the band's songwriting, and "Obsession" is perhaps the most predictable UFO album so far: many hard-rocking tunes, a ballad to close each side of the LP, a few extra arrangements here and there and that's pretty much it. Paul Raymond's keyboards are very discreet most of the time too (a detail that adds to the impression that UFO were trying to veer away from "Lights Out" as much as possible), and the Way/Parker duo just play along with the songs most of the time.

"Obsession" starts quite well, with two very good rockers in the form of "Only You Can Rock Me" (a staple to their setlists even today) and "Pack it Up (and Go)", but starts to worringly lose steam from that point onwards - the two final songs, "One More for the Rodeo" and "Born to Lose", being instantly forgettable, to put it on polite terms. Of course there's some seriously good stuff hidden between the grooves here, as the slow rocker "Ain't No Baby" (despite it loans more than a few ideas from Black Sabbath's "Lord of this World"!) and the truly excellent "Cherry" (nice bass riff from Pete Way) are happy to testify. But it doesn't hit the nail right on the head most of the time: "Hot 'n' Ready" is no more than serviceable, "You Don't Fool Me" is too more-of-the-same to leave any lasting impression, and "Lookin' Out for No. 1" is an anodyne ballad that seems to exist for the sole purpose of filling a blank on the album, if you know what I mean - two blanks, actually, as there's also a pointless reprise halfway through the B side of the LP.

"Obsession" is a mostly decent record of course, and it makes for an effortless listening experience with some replay value to it (while also being the very first album to display the now iconic UFO logo, in case you didn't notice). But it doesn't rate that high on my Metalomether, I'm afraid, being the starting line for a long stretch of unspetacular records packed with adequate-but-not-really-memorable moments of competent semi-mediocrity. And hold your breath, because there's quite a lot of these waiting for us around the corner!