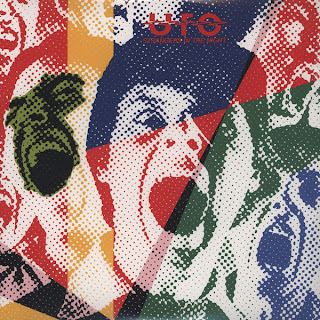 Yeah, I know. A perfect score for a live album? Not only that, but a live album being the landmark of a band's career, the best thing they ever done, the crowning achievement that will be remembered by the thankful masses long after they're gone? For most bands, a live recording is little more than a money grab, often a way to celebrate a successful period and turn it into even more albuns sold - or else, if your band are on a down, a subterfuge to milk some extra cash out of past glories. Sometimes, it also works as a quick and effective stratagem to get rid of disadvantageous or obstructive record deals. But there aren't that many bands out there that could (or can) release a live album strong enough to leave a lasting mark, capturing their efforts upon a stage in such a favorable light that you can't help but wish you were there, every single time you listen to it. UFO surely could, as they were always an outstanding live act with a strong repertoire to match - and they surely did it with "Strangers in the Night", easily one of the best live albums a heavy rock band ever managed to release, and I mean it.

Recorded in autumn 1978, during a string of shows in the USA, this 2-LP package is so unbelievably good that it even makes UFO look bigger than they really were at the time. If you never heard the band before, this is the record that will almost fatally turn you into a big fan, and you're likely to search around like crazy for the studio releases, just to find out that the live versions are actually better in nearly all cases: they never captured in a recording studio the same magic they created live, which is a compliment to their powers when in concert rather than anything detrimental to UFO's usual releases. Take "Doctor Doctor" as an example: a good-enough-but-nothing-memorable song in "Phenomenom", it comes out as a near masterpiece in live form, a perfect mix of melody, hard riffing and exhilarating energy. "Rock Bottom" is perhaps even better, its 11-minute-plus showcase of strong riffs and powerful guitar-keyboards interplay being a tour de force of jaw-dropping proportions, dwarfing the studio version in no uncertain terms.

All musicians deliver great performances here. Maybe Pete Way and Paul Raymond are slightly less prominent than the rest, but they sure provide a great backbone for both Phil Mogg and Michael Schenker's sterling performances to shine, whereas Andy Parker (never mentioned in any drummer's hall of fame, as far as I know, which is a bit of a shame if you ask me) shows in no uncertain terms just what a highly capable sticksman he is. Contrary to most live releases of the time, there's very few overdubs to be heard around here - the guitars, for instance, couldn't be overdubbed, as they also came through the drum mics and any extra tracks would hopelessly mess the whole thing. Therefore, "Strangers in the Night" is mostly very faithful to the experience of being in a UFO concert - despite the fact that the tracking order bears but a passing resemblance to the actual setlists of the tour in question, but nevermind.

It's no easy task to pinpoint highlights around here, as there's such an abundance of remarkable moments that nearly all tracks are memorable in each own right. "Love to Love" sounds even more grandiose than its (already very good) studio counterpart, with an atmosphere that enfolds the listener from start to finish, while "Out in the Street" and "I'm a Loser" are highly emotional pieces carried along by beautifully played, near-hypnotic keyboard parts. On the other hand, "Lights Out" fulfills its heavy metal promises with great aplomb, and even undemanding hard rocking tunes like "Too Hot to Handle" and "Only You Can Rock Me" sound surpringly powerful and intense, way more enthusiastic than their rather tepid studio versions. These are songs meant to be played upon a stage, and the production (handled by Ron Nevison with Brian Chubb as a live sound engineer) deserves a lot of accolades for capturing UFO's energy in all its glory. All things considered, this is a truly impressive affair, and everyone involved should be very proud of having a part on it.

Unfortunately, this remarkable release would also be the swansong for a very fruitful period in the band's history, as Michael Schenker would make his leave almost as soon as the tour from which it was recorded was over. Not a surprising development anyway, as the axeman's erratic behavior had become too exasperating for his bandmates (most of all Phil Mogg) to endure - to such an extent that they seemingly had a replacement at hand, clearly anticipating the worst case scenario to come. It took them no more than a few days to confirm Paul Chapman as a substitute, the new guitarist having already filled in for Schenker a number of times during the "Obsession" tour, as the German guitar hero's unreliability and excesses more than once rendered him unable to perform. It's a shame that such a strong formation had to come to an end, but maybe good things can only last so long, who knows? Whatever the story, "Strangers in the Night" is an album any self-respecting heavy rock aficionado simply can't live without. If you don't have it, do yourself a huge favor and go buy it straight away. Like, right now.