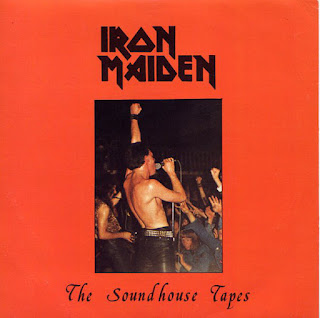 Oh boy, this is going to be one hell of a ride.

Iron Maiden is my favorite band. Period. Their music moves me, all the shows I had the chance to witness were no less than amazing, and I would have never picked up a bass guitar if not for Steve Harris' galloping triplets. I have all of their albums (often in more than one version), lots of bootlegs in audio and video, near a dozen t-shirts and so on, so I guess you got my drift. Still, I'm confident enough that this batch of reviews will be more than a barrage of embarassing and unbridled adulation - believe it or not, I'm not the kind of guy that will scream "genius!" to the sound of Adrian Smith tuning his guitar or something, and I actually do have a fair share of criticism waiting to be done in places. Not that I hold any illusions that yet further reviews of such an entity can make the faintest difference for the heavy metal world (let's be frank, few subjects in the history of rock and roll are more frequently addressed than Iron Maiden's biography and/or record analysis), and rest assured that I won't delve into minute detail when it comes to the group's convoluted history, as it would be a very exhausting (not to mention pointless and hopelessly out-of-place) enterprise. But oh well, perhaps the exercise can at least be of some amusement to the (very) casual reader, and I'm damn sure it will be a lot of fun to get it done, so there you have it.

That all said, let's skip the opening credits and go straight to "The Soundhouse Tapes", shall we? (Don't worry, I won't be reviewing every single slice of vinyl ever released by Iron Maiden, but this particular EP played such an important role in the history of the band and NWOBHM as a whole that it would be silly to ignore it. Studio LPs next, you can take my word for it!)

By the time the four musicians then comprising Iron Maiden entered the Spaceward Studios in Cambridge, on New Year's Eve weekend 1978, the group were still climbling the ladder from youthful hopefuls to genuine promise. Though the band existed for a mere three years, bassist Steve Harris already was the sole original member, and the line-up that recorded the original tapes were together for no more than a couple months before entering the studio. Guitarist Dave Murray was Harris' faithful squire since late 1976 (despite a brief intervail in 1977, when he got as far as to record in Urchin's "She's a Roller" 7'' single), and drummer Doug Sampson (who Harris knew from the time both shared kitchen duties in Smiler), was pounding the drums in Maiden for roughly a year, but the final piece of the jigsaw came together only in November 1978: Paul Di'Anno, a bloke from East London formely associated with a punk act named The Paedophiles (not much of a chance to become world beaters with such a politically-incorrect moniker, lads). Though with no previous background in metal (you can dismiss any claims he used to sing with Bird of Prey, for instance, as it's completely unfounded), Di'Anno clicked remarkably well into Maiden's setup, and his raspy, aggressive vocal delivery was one of their defining features during their street-level-metal days. (and no, I'm not at all convinced guitarist Paul Cairns had any role on these recordings, so he won't receive any further mentions around here. If you happen to know better - most of all if you're Paul Cairns himself! - feel free to get in touch)

It was a simple plan, as it were: record as many songs as possible, mostly in a one-take-no-dubs approach, and tout the tape around in a bid to get more gigs. Things went well during the recording sessions, and a rough mix was handled to the musicians soon after. The studio wiped out the master tapes after a few weeks though, in what seems to have been a misunderstanding around the payment of an additional fee. Therefore, the recordings never received a final mix, let alone a proper mastering - something that may have been a blessing in disguise in a sense, as the rough edges add an extra dose of charm and attitude to the proceedings. And, despite any production shortcomings, the tapes served far betten than its original purpose: "Prowler" turned into a fan favorite at Neal Kay's Bandwagon Heavy Metal Soundhouse, a certain manager named Rod Smallwood also got hold of a copy and oh well, we all know the end of this happy story.

With fans clamoring for something to buy during their increasingly-packed shows, Iron Maiden felt it would be a good move to press some 5.000 copies of their now one-year-old Spaceward recordings, and labeled it as "The Soundhouse Tapes" for greater effect. Famously, the band had to send the vinyl 7'' to customers in advance, as the front covers took a bit longer than expected, and things were developing so fast for the lads that holding the release for a few weeks simply wasn't viable.

From the four tracks laid down on tape, three cuts were selected for Maiden's innaugural release - "Strange World" was also recorded, but suffered the most from the lack of a proper mixing, and was deemed too substandard for release as a result (it would appear officially many years later in the "Best of the Beast" compilation, incidentally, but let's not rush things). The songs here featured are played in a  considerably slower tempo, more attuned to the late-70s metal approach rather than the NWOBHM revolution waiting just around the corner: in fact, this EP is an almost unique opportunity to hear the transitional days of not only Iron Maiden, but British heavy music as a whole, as you can easily compare these early, semi-formative numbers with their later, now canonical counterparts. No significant changes in arrangements and such, just a band soon to become huge, still trying to find their signature sound.

Doug Sampson does a commendable job with the drums, and it's curious to realise that this is perhaps the less prominent basslines ever appearing in a Maiden record - it's still there of course, and perfectly audible all the way through, but not up front in the mix as it would become mandatory in later releases. Di'Anno deliver the goods without missing a note too, but it's funny to note how he was still trying to figure out how to be a proper "metal" singer, being pretty much a punk rock singer trying to sound right. And there's precisely nothing wrong about that, you know, as the crossover effect of his voice was one of the nicest things about early Maiden. They were never a punk band, and never really wanted to be, but the unbridled energy of punk rock surely had its influence on making metal what it is now, as I'm sure your nearest Glenn Tipton or Lemmy Kilmister would be more than happy to point out - and it's fascinating to hear such a process going on almost in real time, this being one of the coolest things about listening to "The Soundhouse Tapes" on retrospect. 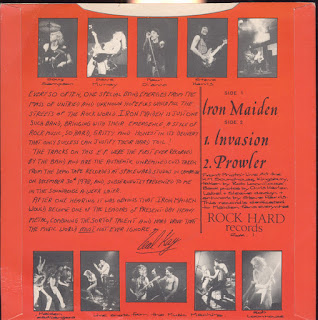 "Iron Maiden" opens proceedings in a very passionate manner, and the more mid-tempo rendition gives it sort of a pub rock vibe that sounds really nice to my ears. Though far from being the most accomplished piece of songwriting ever penned by the group, it's an extremely efficient tune nonetheless, and it comes as no surprise that it became one of the defining songs for the outfit's convoluted history. "Invasion" didn't really survived that well the test of time, that's for sure, and it's hard to imagine any die-hard fans asking for it to be featured in the band setlists nowadays; still, I'd say it's a pretty decent tune all the same, and I personally like the early version better than the hurried, too-fast-for-its-own-good recording that would pop up as the B-side of their "Women in Uniform" single roughly a year later. The instrumental bits are kinda confusing, and the vocal lines drift from aggressive to overtly melodic without making much of a sense in the process, but it's nice to hear a band making a perceivable effort to learn their trade, and this early effort surely paved to way for many history-related epic numbers to come.

But the truly outstanding number on "The Soundhouse Tapes" is "Prowler", hands down. I have always consider this to be one of the archetypal songs from the entire NWOBHM, and I still think the same way.  It has it all really: the tasty guitar leads, the commanding bass, the infectious drive, the quirky twists and turns, the immature lyrics, the catchy chorus, all packed in a slightly unusual song structure and carried along with loads of youthful enthusiasm. It was Maiden's very first hit, and it's no mystery why: even with less-than-stelar production values, it's a song that grabs you by the neck and just don't let go. A truly classic song, and easily one of the decisive recordings for the development of heavy metal as a whole - perhaps not as bombastic as the LP version, but still a listen sure to put a smile in any metalhead's face.

"The Soundhouse Tapes" would be the only independent release in the outfit's career (the Rock Hard label never really existed, you know), and for good reason. The response to the EP was so overwhelmingly positive that record retail chains, bombarded with requests from customers, made enquiries to order thousands of copies - only to learn it was a limited run and nearly all pieces were sold by mailorder in a matter of days. Such resounding success no doubt raised a few eyebrows in the music industry - and you must take into consideration that NWOBHM was all ready to go by this juncture, with bands like Angel Witch, Saxon, Samson, Praying Mantis and Tygers of Pan Tang just waiting for a chance to stand out of the club scene in a bid for world domination. We all know who won this race by now, but it's fair to point out that Iron Maiden was one of many contenders back then - one of the most promising perhaps, but hardly a clear favorite.

The noise would finally be heard at the offices of the mighty EMI, and those gentlemen (who undoubtedly knew a thing or two about music) swiftly concluded there was a bit of a mileage in investing some money on all those long-haired hopefuls after all. This led to the seminal "Metal for Muthas" LP compilation in the early days of 1980 - a slice of vinyl that, in a sense, served to create a sense of anticipation towards the Iron Maiden debut (the recordings sessions going on pretty much at the same time "Metal for Muthas" hit the shelves). This compilation will hopefully be reviewed around here in due course, but let's stay on focus, right? As something as a business card for Iron Maiden, "The Soundhouse Tapes" surely served its purpose, and then some - and I'm sure any obsessive Maiden collector drools over the prospect of obtaining an original copy (if not owning one already, that is), though this is an item that won't come cheap at all. 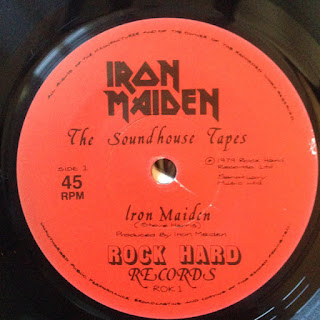 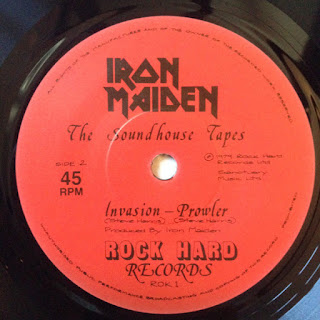 Thanks a million to Discogs for picture sleeve and label scans