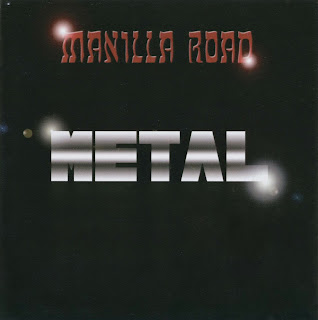 Many scholars seem to regard "Metal" as a logical progression for Manilla Road, a record that laid down the foundations for the heavy metal skyscraper soon to be built by Mark Shelton and his cohorts. Though I'm not entirely opposed to that notion, it still feels to me like a way-too-simple way to explain things, and I sincerely think that "Invasion" reveals even more of the classic Manilla Road to come than their second LP from 1982. To my ears, "Metal" is a somewhat confuse and unfocused record, recorded by a group still trying different avenues without being able to figure out what to do next, and therefore one of the least interesting releases from the band's entire repertoire. And I can't help but feeling that opting for such a straight-to-the-point album title, although far from a misleading move, was an attempt to conjure a sense of connection lacking when you simply listen to the songs themselves.

"Enter the Warrior", the tune that opens proceedings, is surely heavy, but its somewhat ramshackle construction leaves something to be desired, whereas "Defender" is a slightly funny, but immensely silly metal-by-the-numbers track with throwaway lyrics - not to mention its brevity, which is not a problem in itself of course, but derives from such a simplistic formula that it turns out to be considerably frustrating. Not a promising start, I would say. The pre-chorus bridge in "Queen of the Black Coast" is sure evocative of eerie tunes to come, but it's another song almost ruined by half-baked songwriting. And the A-side is almost over when the title-track comes for the (discreet) rescue, with some interesting arrangements and the almost haunting singing of Mark Shelton finally telling us something about the glorious times ahead - although you can also hear a voice speaking "metal!" that sounds more like a burp, which is hardly a pleasant sound to immortalise on vinyl, if you ask me.

Side 2 of the record stars with "Out of Control With Rock 'n' Roll", a songs as cheesy as you might expect from such a title, unfortunately. Nothing too objectionable or regrettable, I'd say, but surely much closer to made-in-USA hard rock than anything else, such kind of music hardly being Manilla Road's forté by judging on this track alone. The solos are pretty good, though. Fortunately, next comes the most interesting song here by far IMO, "Cage of Mirrors". It's an epic tune with many tempo changes and some undeniably forceful riffing, all enhanced by some perfectly nice imagery on the lyrics. This is surely the closest "Metal" gets from offering a missing link to Manilla Road's future developments, a track that would not be out of place on "Crystal Logic" or even "The Deluge", for that matter. To round things off, the new recording of "Far Side of the Sun" is OK I guess, but adds little to nothing to the original version, the validity of such a reworking being quite questionable if you ask me.

OK, let's not be too harsh on "Metal". It sure serves a purpose as a transitional record, as next releases would be more than willing to testify, and there's some evolution to be found in comparision with the perhaps more musically endearing, but surely more rough-edged "Invasion". Mark Shelton was surely developing as both a guitarist and songwriter, and the band's willingness to create different atmospheres throughout the record is also quite commendable. But still the fact is that "Metal", as a musical entity of its own, didn't stood that well the test of time. Something that the nearly non-existant sound production doesn't help at all to improve - not to mention, of course, the pretty atrocious artwork, featuring one of the most nondescript front covers in metal history. One for die-hard fans, definitely - and count me in, as I'm sure one of those and I even own a copy!

Have you been involved with any of the bands mentioned here? Have any extra info and/or corrections? Please e-mail me at drequon@gmail.com and let me know!
Postado por Drequon às 17:23