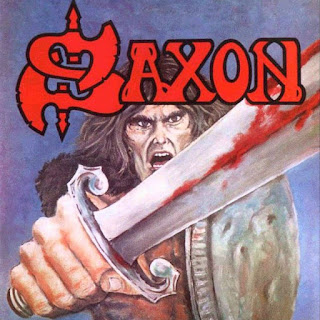 It was a whole different world out there when Saxon released their first LP, way back in 1979 (yeah, "when the dam began to burst" and whatever). Many things we now take for granted simply weren't there yet, such as internet, global warming, cellphones, digital music and NWOBHM, to name a few. That said, it's just natural that Biff Byford (V), Paul Quinn (G), Graham Oliver (G), Steve Dawson (B), and Pete Gill (D) still didn't know exactly what to do with their music and it should come as no surprise to learn that it shows on Saxon's eponymous debut album, though was far from ruining it, fortunately.

It all begins with "Rainbow Theme / Frozen Rainbow", an epic heavy ballad slightly in a Uriah Heep vein and with more than a hint of prog rock in it. A good start, but not very representative if we're to be strict here. Then the band delivers "Big Teaser", a tune with a glam rock feel which strongly reminds me of Marc Bolan. And then side one comes to an ending with "Judgement Day", a competent (but kinda confused) attempt to write a convoluted song about the end of the world (c'mon, all metal bands have been there and done that). That means the whole A side of Saxon's debut LP presents no hints of their signature hard-hitting-metal-with-biker-themes attack, and that is to say something about how unsure of themselves the band seemed to be at this point.

Fortunately, side two comes to the rescue with the excellent "Stallions of the Highway" making a clear statement that an exciting new era in metal was just around the corner (or at the flip of an LP if you want to stretch the metaphor further). "Backs to the Wall" is also great in the same no-frills-heavy-metal fashion of the preceding tune, and I think that "Militia Guard" is a nice way to close proceedings, a creative number with a semi-acoustic epic feel and some nice twists and turns here and there. "Still Fit to Boogie" is, ahem, a boogie number without many redeeming factors, but it's reasonably funny and there's nothing fundamentally wrong about being funny, right?

The production is not good at all (most of all, it lacks punch and energy), but I guess the lackluster results of this studio visit paved the way for the heaviness to come, so it kinda was a good thing in the end. BTW, I guess the same can be said about the LP as a whole; it shows not only a band in search of its own musical personality, but also portrays a whole metal generation trying to take the '70s heritage one step further, but not yet sure how it should be done. Musically speaking, this is one for Saxon's (and NWOBHM's) hardcore fans, but those who fit the description will find a fair amount of songs to enjoy here. And if you're interested in the development of heavy metal through the years, then I'll also suggest you to give this one a spin or two.

Have you been involved with any of the bands mentioned here? Have any extra info and/or corrections? Please e-mail me at drequon@gmail.com and let me know!
Postado por Drequon às 07:30