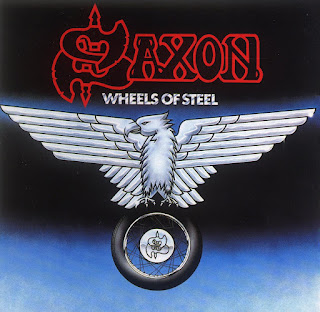 And there it is. Although not a flawless record by any means, "Wheels of Steel" is one of a handful of absolutely essential albums for anyone who wants to have a clear vision of what NWOBHM was all about and to understand how it came to influence almost everything done in heavy metal music ever since. So, I totally think it deserves the maximum 5-star rating: I mean, if you're reading this, you have at least a passing interest in NWOBHM, and if you do, you just have to listen to this album, no excuses.

Learning from the problems faced while recording their first LP, Saxon found a good producer (Pete Hinton, a man whose role in forging the NWOBHM archetypal sound is never properly acknowledged, IMO) and captured in the studio the sheer intensity that was so evident in their live performances. Conjuring the biker spirit that lived in rock music since Steppenwolf's "Born To Be Wild", mixing it with the obligatory influences of '70s metal (most of all Judas Priest) and adding loads of youthful energy, Saxon forged its own interpretation of what heavy metal should be to survive the '80s and created something that now is almost synonymous with heavy metal, period.

"Motorcycle Man" is almost an epiphany, a near-revelation of what early '80s heavy music should strive to achieve. The simple-but-strong riffs, the intense pace, the unique vocals of Biff Byford...it's exactly what the potentially huge fanbase of long-haired metalheads wanted to hear - unashamedly upbeat heavy music played with unbridled enthusiasm. And it was so groundbreaking that I'm sure nobody even knew at first that this was the new metal they were looking for. Listening to it 35 years into the future, the crudeness of the whole thing is too loud to be ignored, and I'm sure dozens of bands have done it even better in subsequent years. But it sure gets easier when the vocabulary is already at hand, and that's what Saxon did with this single tune: they created a landmark, an example to be followed. That's quite something, if you ask me.

As above stated, "Motorcycle Man" was an instant classic, but some other songs deserve the same accolades such as "Freeway Mad", "See the Light Shining" (with a not-really-complex but extremely effective tempo change that grabs you by the neck and just won't let go), the nice semi-ballad "Suzie Hold On", and the slightly less upbeat (but equally intense) title track, among others. Personally speaking though, I consider "747 (Strangers in the Night)" to be not only the best song on here, but perhaps the finest song Saxon ever recorded. It unites a dramatic feeling (the suspense building of the lyrics about two airplanes with difficulties to land is near perfect) with a main riff that is pure genius, an opening solo to die for, and a driving rhythm that will make you bang your head without even noticing. What a classic metal tune, my friends. 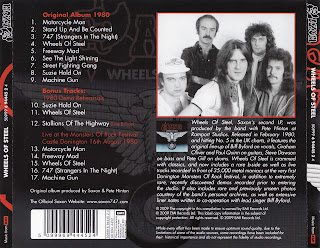 I don't think that "Street Fighting Gang" is in the same league that the other songs are in here, and "Stand Up and Be Counted" is perhaps slightly inferior to the others, too. But make no mistake, "Wheels of Steel" is an album you just have to add to your collection in case you still don't have a copy. This record resumes Saxon and also a fair bit of what NWOBHM was, is, and forever shall be. No less. And oh yeah, it also rocks like a monster, so you won't be disappointed with that, either. Believe the hype and go get it straight away.

Have you been involved with any of the bands mentioned here? Have any extra info and/or corrections? Please e-mail me at drequon@gmail.com and let me know!
Postado por Drequon às 16:41