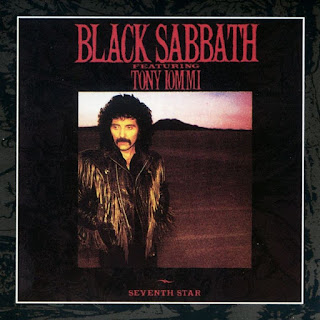 I guess it's totally forgivable that Black Sabbath would feel like flogging a dead horse after the considerable artistic failure of "Born Again", not to mention dwindling album sales and an almost embarassing world tour. Oh well, these guys sure did flog a few horses back to life in the past, but sometimes you can only get so far, you know. The ship was already sinking when Ian Gillan left to rejoin Deep Purple, and when Geezer Butler announced he also had enough, Mr. Tony Iommi found himself with not much to lean on. After a brief reunion of the original line-up at Bob Geldof's Live Aid concert in 1985, Iommi felt it was about time for a change, and decided to lay the Black Sabbath name to rest for good.

Enrolling faithful keyboardist Geoff Nicholls, bassist Dave Spitz and drummer Eric Singer (then a member of Lita Ford's supporting band), Iommi was soon on work for a solo album. Glenn Hughes (of Trapeze and Deep Purple fame) seemed a perfect choice for a singer, as his voice had very little to do with typical Sabbath and would help giving Iommi's new venture a much needed touch of personality. But, as we all know by now, Warner Bros. had other plans. In fact, the label nearly forced Iommi to resurrect the Black Sabbath name once again, threatening to shelve the whole thing in case of disagreement. Reluctantly, the guitarist yielded to their request, but not before securing a "featuring Tony Iommi" line on the front cover, just to discreetly make his point between the lines. As a result, "Seventh Star" had to bear all the weight of Sabbath's name on its shoulders - something that was unfortunate if you ask me, as the record immediately received the "embarassing sell-out" stamp by hostile critics without ever getting the courtesy of a fair review.

Let's put it unambiguously: "Seventh Star" is actually pretty cool. Not an all-time classic by any stretch, that's for sure, but you just have to take it for what it is to acknowledge its merits. Tony Iommi was clearly willing to experiment with the hard rock vibe of those times - sometimes bordering on AOR like in "No Stranger to Love", but also keen to capture the more lively and forceful angle of the genre, as tunes like "Turn to Stone" and the excellent opener "In for the Kill" will be more than eager to demonstrate. Free from the shackles of Black Sabbath's musical identity (a bit restrictive one in itself, let's be honest), our beloved riffmaster seem quite rejuvenated, and though the band never moves to truly groundbreaking territory, fact is that "Seventh Star" is way more honest and adventurous than people use to concede it.

One of the major highlights must surely be directed to Glenn Hughes. His performance is truly excellent throughout, and it gets even the more impressive when you consider the serious substance abuse and associated health issues the man was experiencing at the time. The aforementioned "No Stranger to Love", for instance, would be condemned to saccarine mediocrity if not for Hughes soulful, memorable performance, whereas the title track owes to him much of its ominous, yet catchy charm. Spitz and Singer keep things simple most of the time, while mainman Iommi clearly roll up his sleeves a little, leaving his trademark riffing a bit on the background and trying out a lot more fills, leads and harmonies than ever before. Granted, sometimes you just wish he would stroke harder on that damn strings, but there's a lot more colors on his playing than usual, and it's quite interesting to hear the man stretching his creative muscles once you get the feel of it.

There are flaws, no doubt about that. I'm afraid "Danger Zone" and "Angry Heart" are a bit too generic for their own good, and the bluesy "Heart Like a Wheel" never seem strong enough to actually get off the ground, being instantly forgettable as a result. But I think "Seventh Star" deserves more respect than it usually gets, and all comparisions with the Sabbath of old are a bit of a shame IMO. The fact that the project was embellished with the Black Sabbath logo was actually its undoing, with few people bothering to give the LP a proper listen and many dates of the tour being cancelled for poor ticket sales. Band members would also come and go on a weekly basis, something that really disturbed the production of follow-up album "The Eternal Idol". But such uncertainties seem to have been surprisingly reassuring for Tony Iommi himself: from this point onwards, he would definitely assume Black Sabbath as his own personal enterprise, asking no permissions to do whatever musically (and commercially) suited him. Many detractors say he just put Black Sabbath's name to shame by doing so, but I must say I do feel a distinct sympathy for those who walk through the crossfire with a brave face and a stubborn mind. God bless him, and all that.


Have you been involved with any of the bands mentioned here? Have any extra info and/or corrections? Please e-mail me at drequon@gmail.com and let me know!