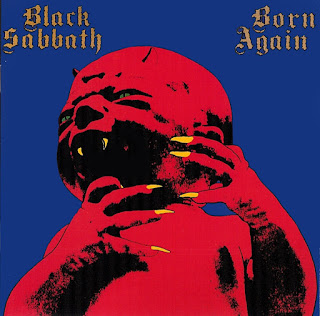 Three years after reinventing themselves with the highly impressive "Heaven and Hell", Black Sabbath were once again at the verge of collapse. Ronnie James Dio, a decisive feature in such resurrection, decided to use his powerful pipes elsewhere, and soon kickstarted a very respectable solo career, with drummer Vinny Appice lending him a hand at first. That left Tony Iommi and Geezer Butler with the unenviable task to prove the naysayers wrong once again, putting together a strong formation with a stellar singer to match. To everyone's surprise, none other than Ian Gillan (of Deep Purple fame, as I'm sure you all know) accepted the challenge, putting a considerably successful solo endeavour to rest in order to sign the dotted line with Sabbath. Bill Ward was also convinced to return to the fold, and soon work commenced on what would become "Born Again". It was all quite bizarre to be honest, always looking more like an unassuming supergroup rather than a genuine incarnation of the band - and the fact that this apparently disparate partnership was a short-lived one probably came as little surprise to everyone involved with the metal community at the time. Still, "Born Again" is undeniably a very interesting piece of hard/heavy history, and deserves a few careful listens from everyone who cares about the genre.

After you make way through the truly atrocious front cover (I know many people love it, but come on, it's total garbage), you will also have to somehow ignore the very muffled sound from the record, a surprisingly substandard final result for a band as relevant and successful as Black Sabbath. Don't know what happened really, but it sounds like a low-budget demo rather than an official release from one of the most important bands in the heavy metal pantheon, and the whole affair assumes a disturbingly amateurish vibe due to these shortcomings. I'm sure many people see it from a different viewpoint, stating that rough edges are much of what heavy metal is about, but we're not talking about a bunch of kids saving pennies to pay for 500 vinyl copies in a record facility, you know.

Now about the music. The album kicks off quite well actually, with "Trashed" being an engaging and fast-paced tale of a car crash that really set necks in motion. But things get quite shaky as soon as the pointless instrumental (oh rly?) "Stonehenge" starts, with few redeeming features from this point onwards. Some compositions sound quite disjointed in places, while others resort to such well-worn formulas that you can almost guess what's coming next. There's nothing fundamentally wrong with "Digital Bitch", for instance, but it's a simplistic, straightforward heavy rock tune that hundreds of NWOBHM hopefuls could have written in their sleep, whereas "Born Again" (the song) just rambles around without ever getting interesting in the process, its moody-then-a-bit-heavier-heavy-then-moody-again dynamics failing to create any emotional connection with the listener. "Keep it Warm" and "Hot Line" are perhaps slightly better, but I seriously doubt anyone would ever mention these as highlights in Black Sabbath's career, if you know what I mean.

The consensus of opinion before the album release was that Ian Gillan would have serious problems to settle in, and "Born Again" proves beyond doubt that it was a fair assessment. It's not his fault really, as he's just being himself most of the time - but his bluesy voice and real-world, often playful lyrics doesn't sit well with the band's instrumentation. He shrieks quite a lot too, but I guess most of it are ill-fated attempts to liven up and/or glue together songs that were never that hot or well-crafted in the first place. The sad fact still remains, though: it does not work. Sometimes they get a good thing going, as in the aforementioned "Trashed" (the best number here by far) and in some moments of "Disturbing the Priest" - a song that doesn't make much sense to be honest, but with a few interesting twists and turns to its credit. "Zero the Hero", is carried along by some seriously heavy riffing and it's not an obnoxious tune by any stretch, but it drags along for quite a while and kinda overstays its welcome, not to mention how the verses barely fit to the instrumentation.

"Born Again" is an album that gained something of a cult status as time went by, with some critics even arguing it is some sort of overlooked classic. I humbly beg to differ: this is a weak album from a very capable set of musicians, a record that leaves to be desired in almost all fronts and therefore cannot be recommended with any degree of enthusiasm. After a tour that no one involved will recall as successful (the huge Stonehenge props that wouldn't fit in most venues, the dwarf made to look like the crying baby-demon depicted in the album cover, the band playing "Smoke on the Water", yeah, you've got the drift), the whole project was quickly disbanded. Bill Ward left even before that, with Bev Bevan (yeah, the same guy from ELO) sitting at the drumstool on the tour. Gillan was lured away by an offer to rejoin Deep Purple, and Geezer Butler got disillusioned with the whole thing and flown the coop in early 1984. For the first time in his career, Tony Iommi was all on his own - and it took a while until he put his mind together and reassemble a working unit under the Black Sabbath brand.

Have you been involved with any of the bands mentioned here? Have any extra info and/or corrections? Please e-mail me at drequon@gmail.com and let me know!
Postado por Drequon às 10:10