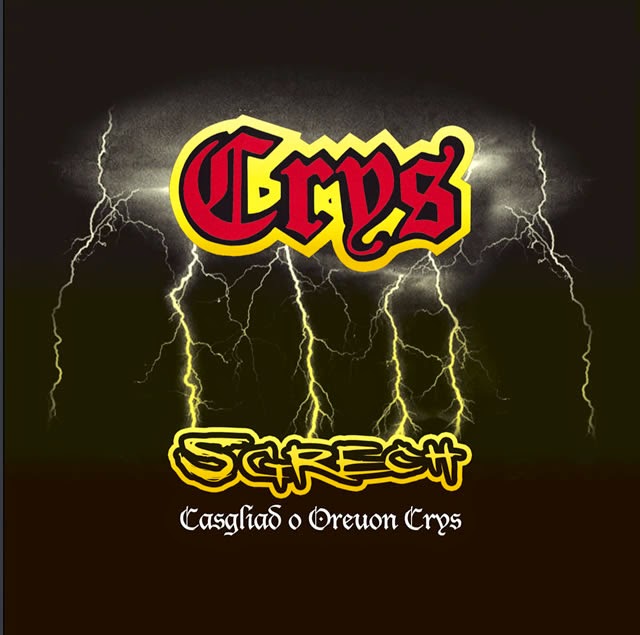 It took a while longer than I anticipated (a good couple years, actually), but I finally got my hands in "Sgrech", a compilation that retells the story of Crys, surely the most successful Welsh-language heavy metal band ever (now that's a particular distinction, right?). Those who want to delve into detail may read my previous reviews if they like, but this humble CD is a good enough introduction if you know nothing about Crys and just happen to be curious about them. And it's also interesting for long-time fans (almost all of them living in Wales, I suppose), as there's also a new track called "Sgrech", the only song released by Crys in nearly 20 years now.

As everyone would expect, the pinnacle of Crys' career - the "Rhyfelwr" and "Tymor yr Heliwr" LPs, released in the early 80s - is generously represented here, with no less than 10 tracks out of the total of 13 songs included. Not a bad move really, as both albums never saw proper CD reissues and probably never will, so I guess this compilation will be the only chance to hear remastered versions of "Pendoncwyr", "Barod am Roc", "Mwg", the excellent "Gwlith Y Bore", "Rhyfelwr", "Rociwch Ymlaen" and other important tunes of the band's repertoire.

As a fan (perhaps the only Crys' fan outside the UK, who knows?), I think that including only "Edrych am Nerth" from 1995's "Crys Roc Cafe" CD was a little too harsh on it ("Cefnogwyr Y Byd", for instance, could have made it onto this compilations without much effort) and the fact they left a song like "Cwrdd a Gofid" (perhaps my all-time favorite from Crys) out of the album is a total disgrace. And it was a nice move to include a song from Crys' humble 7'' single debut from 1980, but why they picked up the predictable "Lan Yn Y Gogledd" instead of the way more forceful and individualistic "Cawd Symud" is beyond me. But one has to make some choices, you know, and I guess they know way better than me what really made a difference in their career, so I'll give them credit for putting this compilation together in the first place.

And what about "Sgrech", the only previously unreleased song around here? Well, it's the first (and only to date) chance to hear new lead guitarist Grant Roberts, who filled the shoes of original axeman Alun Morgan as he was living in Canada at the time of recording. Unfortunately, it may also become a permanent replacement, as Morgan passed away in 2012. The song starts a lot like AC/DC's "Thunderstruck" (come on, you sure know what I mean), soon turning into a typical heavy/rock tune with basic instrumentation and a catchy (yet very simple) chorus. Liam Forde's voice sure matured with time, but still it's perfectly recognizable, and new man Roberts have some aces up his sleeve, delivering some tasty leads and a pretty respectable solo. All in all, a good enough song for such a commemoratory release, though not in the same league of Crys' finest compositions.

I'm not sure if there's any hope for a new album anywhere in the future, as Crys seem to be happy to keep a low profile, getting together at long intervails for a few low-key gigs and not much else. They all have lives outside of music now, and perhaps a full-scale reunion, even if for a small period of time, will never be a worthwhile endeavour for the lads. I mean, the Welsh-language music market is hardly a thriving one nowadays, let alone if you're in a hard/heavy band, so why bother? Still, I'll keep my fingers crossed - who knows, recording stuff is relatively inexpensive these days, maybe they just get the bug for writing music again... That would make me glad, really.

Have you been involved with any of the bands mentioned here? Have any extra info and/or corrections? Please e-mail me at drequon@gmail.com and let me know!
Postado por Drequon às 14:07