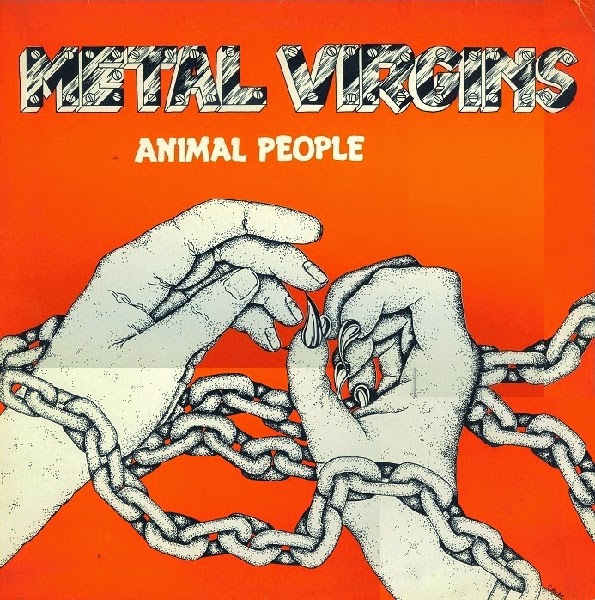 This is one that surely needs a fair bit of background info to be fully understood. Released sometime in 1984, Metal Virgins' "Animal People" is a record that never really made sense within the NWOBHM bandwagon, being far more suited to the punk rock collecting scene - and it's perfectly justified, as we all now know the album was actually recorded by a punk band called The Accursed. The lads from Kent (UK) had already released two very raw albums in the purest DIY fashion, and their music carries a sort of deconstructive vibe to it, sometimes sounding like a highly improvised and very brutal collision of GBH and psychedelic rock. A description that, as some of you may be aware, could be adequately used for Metal Virgins as well.

The songs that comprise "Animal People" were written and recorded in a small period of time, the trio of Steve (V/G and main songwriter), Gary (B) and Glenn (D) being already busy enough with The Accursed's "Laughing at You" LP that would come out the same year. Needless to say, the resulting album is much more a piece of reckless experimentation than anything more serious, the musicians themselves probably seeing it as a twisted inside-joke and pressing a handful of copies just for the sheer hell of it. They sure tried to associate it with heavy metal, not only by adopting the Metal Virgins alias but also by renaming their Wreck Em Records label as Thrash Metal Records. But I guess you don't need more than the first seconds of the title track to realize that it's pretty much punk rock, no matter how hard they want to state otherwise.

I'll tell no lies to you people: "Animal People" is a bloody mess most of the time. Perhaps the closest comparision would be Venom (though bands like The Blood and Mayhem, the English version, would not be too far off the mark), but you would have to imagine a very punk-oriented and immensely more ramshackle Venom to form an adequate image of Metal Virgins in your mind. Actually, some songs seem to have never been properly finished - I mean, I don't think they rehearsed "Virgins" before recording it, and I seriously doubt they would ever be able to repeat what they did on "Rubber Dolls", no matter how hard they were willing to try. I'm not even sure Steve actually bothered to write the lyrics, as some of it seems to be totally improvised - the obsession with terms such as "fuck" and "shit" is probably not a coincidence, you know. 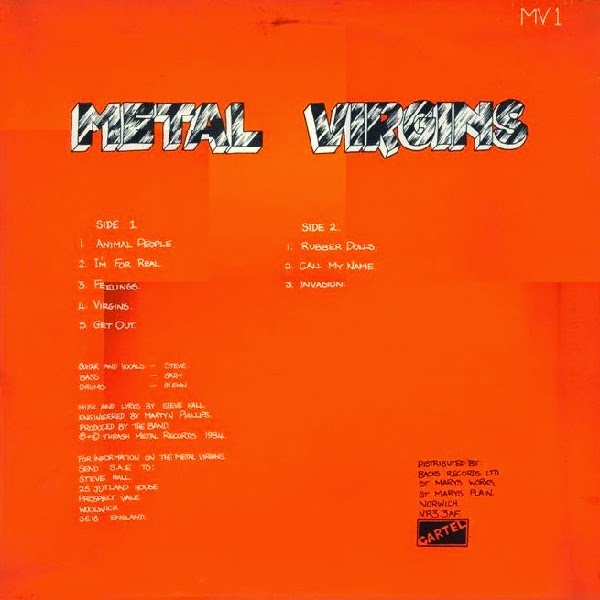 The lack of knowledge on what heavy metal is all about is clear for all to hear, sometimes with truly laughable results, and the nearly nonexistent production doesn't help matters really. Not to mention the rudimentary guitar histrionics, that come and went without any relation with what is being played by the rest of the band. Some tunes are slightly more accomplished, such as "Get Out" (with a reasonable intro before launching into ultra-fast punk/HC nonsense) and the title track, perhaps the closer we'll get to anything truly related to heavy metal around here. But I reckon that the redeeming features are not enough to justify any money and effort from NWOBHM collectors, so if you happen to be one of them I strongly suggest you to invest your hard-earned cash somewhere else.

Still (and I'm the first to admit how weird this is, considering all that I stated above), I almost like "Animal People" in places: it's all downright clumsy, but there's a lot of youthful energy going on, and their carefree approach is almost charming in a way. I mean, most of us are just too cynical to lay down such a musical racket on tape, let alone to release it as an album, so the fact the trio actually did it comes to show just how much we can shovel our opinions up our arses for all they care. They wanted to spend a few hours in a basement pretending they were a thrash metal band, and there you have it. "Animal People" is not about emulating heavy/thrash music: it's about dismantling it and having a laugh while doing it. I wouldn't say the results are exquisite, but perhaps you can find some fun in listening to Metal Virgins if you're in the right frame of mind. They get a 2-star rating out of their pure swagger, and I think it's fair enough. 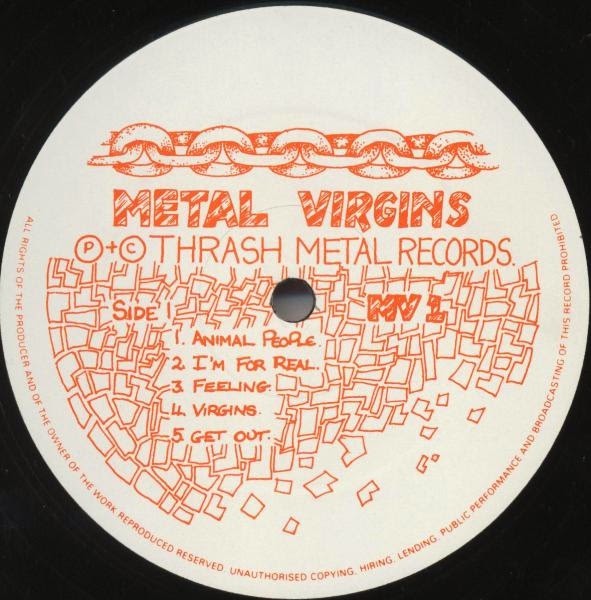 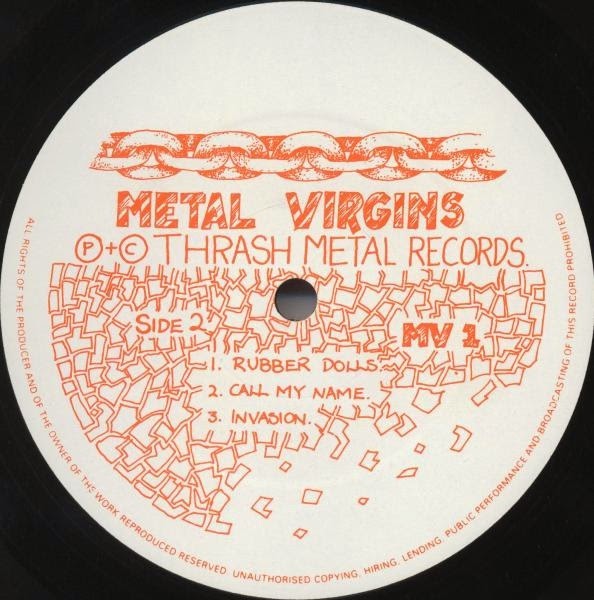 Thanks a lot to Discogs for picture sleeve and label images!

Have you been involved with any of the bands mentioned here? Have any extra info and/or corrections? Please e-mail me at drequon@gmail.com and let me know!
Postado por Drequon às 15:42