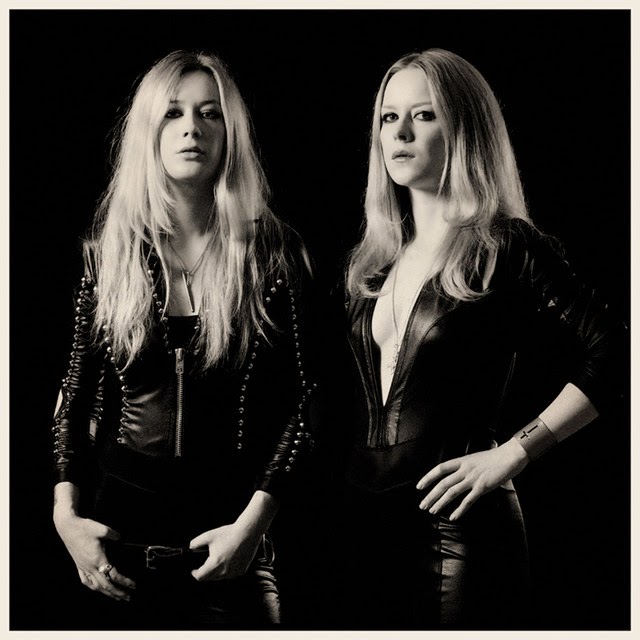 Some lifespans are meant to be very brief, you know, but it's truly amazing just how quickly The Oath came and went. After releasing a nice single in 2013, the duo of Johanna Sadonis (V) and Linnéa Olsson (G) released a very strong self-titled full lenght - and, less than two months after the CD hit the shops, announced that the band was no more. The sudden demise took everyone by surprise, as many simply didn't have the time to listen to the group before it plunged into history, something that rendered "The Oath" (the album, that is) to feel like a near-posthumous effort. It would be a overstatement to say that The Oath (the band) already achieved cult status, but I'm strongly suspicious that doom metal enthusiasts will grant the ladies such a high profile in years to come. And with good reason, readers take note.

The initial riff of opening track "All Must Die" leaves no place for a doubt: The Oath is hugely influenced by old heavy/doom like Angel Witch and Witchfinder General and is not at all ashamed of that. This could be a shortcoming if the songwriters were not creative enough, but it's not the case at all: the song in question is a strong winner, with excellent guitar work and memorable vocals creating an eerie, haunting atmosphere to die for. What an impressive way to kickstart an album. And if it's fair to say The Oath's debut CD does not always live up to the high standard set by its opening number, it's also important to make it very clear: it's a strong record from quite a good band. A very good band indeed.

Lynnéa Olsson is a highly competent guitarist with the right approach for such musical avenues. Her riffs are all very cool, her playing is intense and she has quite a good ear for somber melodies, creating some very dark textures at strategic places. And what a good singer Johanna Sadonis is.  Her voice weaves brooding melodies with sheer conviction, adding almost contemplative overtones to some seriously Satan-obsessed lyrics - and she does all that without ever losing the resolve and swagger needed to convincinly deliver such kind of heavy music (and to sing such lyrical contents without sounding very silly, of course). Simon Bouteloup (B) and Andy Prestridge (D) offer the much needed foundations for the duo to shine, keeping things simple most of the time - though there are some seriously cool basslines here and there, that's for sure. And the straight-to-the-point production is actually very adequate, giving the record a sort of live-in-the-studio vibe that makes everything all the more intense.

Songs like "Silk Road" (a catchy tune with a more rock-and-rolling vibe and excellent vocal performance), "Leaving Together" (this one could REALLY be an Angel Witch song) and "Psalm 7" (slightly closer to sludge territory, but still adequately morbid) are all quite memorable, with nice twists and turns and cleverly crafted to be engaging without getting too complicated in the process. It's not all perfect of course: "Black Rainbow", though mostly a good song, sounds a tad slack-baked to my ears - maybe it just needed a little more time in the oven to get really juicy, if this bizarre metaphor makes any sense to you. And the album loses a bit of steam towards the end, with "Silver and Dust" and "Death Delight" being perfectly acceptable but not much else, if we're to be really strict here. But don't let this pinch of criticism stand in your way: "The Oath" is a truly good album that is sure to take several spins into your CD player.

It's such a pity that this is bound to be the sole release from The Oath, as all those dreary 'irreconcilable musical differences' came earlier than usual for the ladies and we are now left to wonder what it could have been. Still, Johanna Sadonis and session drummer Andy Prestridge joined forces in a new venture called Lucifer (a subtle moniker, that), while Linnéa Olsson is sure to keep things going with Sonic Ritual and Beastmilk, so I guess we'll be hearing more from both in the not-too-distant future.

Have you been involved with any of the bands mentioned here? Have any extra info and/or corrections? Please e-mail me at drequon@gmail.com and let me know!
Postado por Drequon às 16:16