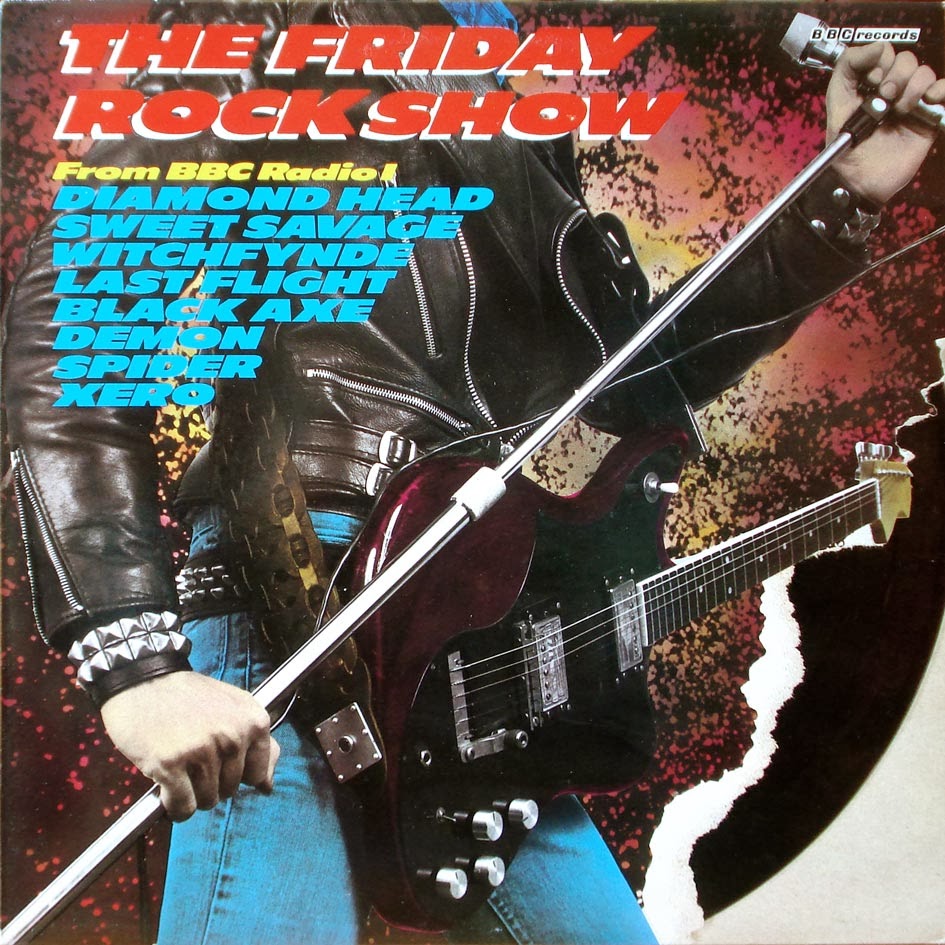 The idea of releasing a compilation LP with session highlights from BBCs "The Friday Rock Show" was one surely destined for success - and it comes as no surprise that 1980's "Metal Explosion" would be followed by another instalment roughly a year later. "The Friday Rock Show" is a rather functional title, but it leaves no room for confusion, and it's a worthy follow-up to the previous volume, perhaps even more interesting than its predecessor for die-hard NWOBHM addicts. While "Metal Invasion" was a good record but with a considerable small ammount of out-and-out NWOBHM, this LP is unequivocally a NWOBHM compilation, as nearly all tracks (even the not-so-interesting ones) can be easily associated with the explosion (pun intended) of youthful musicians growing their hairs down to their belts and playing some unashamedly heavy music for the sheer hell of it. As most of you already know, the musical enthusiasm of good old Tommy Vance allowed countless hopefuls to use BBC's Maida Vale Studios to record a few tunes for nationwide broadcast - and some of the more worthy contributions end up being included on this compilation, mostly with pleasant results.

The fun begins with Spider and "What You're Doing To Me", a song that won't cause any surprises on anyone familiar with the music of this particular bunch. It's a metallic interpretation of good old boogie, sounding like Status Quo with heavier guitars, much like the vast majority of their material and much like a large percentage of NWOBHM outfits, to be honest. Turns out to be a funny song that's very easy to enjoy (although it could be a bit shorter, I guess), but don't expect loads of originality or adventureness going on around here. Unfortunately, the mighty Diamond Head contributes with the somewhat lacklustre ballad "Don't You Ever Leave Me". I love these guys really and they were surely one of the most creative bands ever to come out of the NWOBHM, but I consider this song to be one of their most uninspired moments, a sub-Led Zeppelin without any hooks at all - and God knows Diamond Head's songs are usually overflowing with hooks most of the time. Even Sean Harris' vocal performance is slightly over-the-top, his uhh-babes and whooaas getting truly annoying after a while. Sorry guys, but I could have easily lived without it.

Things improve greatly right after that, though, with Sweet Savage and their superb "Eye of the Storm" tune - a very intense, hard-hitting track filled with flashing guitars and a commanding pace that really set necks in motion. I guess James Hetfield learned a thing or two from the way Raymond Haller sings here - seriously, the voice of Haller and the vocals on "Kill 'em All" sound nearly identical in places. Sweet Savage were really taking a step onwards when it comes to heavy arrangements, being pretty much a proto-thrash outfit even as early as this. Outstanding, really. And Last Flight's "Dance to the Music", although a song of a completely different kind, keep things in a very high level. This is a hard rocker made to make you move, and I bet you won't be able to listen to it without stomping your feet or waving your head from one side to the other. It sounds good-humoured, high-spirited and hugely entertaining without letting us down in the rock department. Perhaps it may be a bit too pop-tinged for some tastes, but I consider Last Flight to sucessfully walk a very thin line between "sounding catchy" and "selling out" here, this song being one of the most unexpected NWOBHM classics you will ever hear. And oh yeah, I mean it!

Side 2 begins with the well-known Demon and "One Helluva Night", one of their most sucessful songs ever. It's a raunchy Hard/Heavy tune like thousands wrote in the NWOBHM era, and I sincerely consider it to be only a marginally-interesting song - let's face it, they sure wrote far more individualistic and challenging music even at the time this LP first hit the shops. Still, it struck the right chord within the metal market of the day and it's still one of their most well-known compositions, so what do I know? I would prefer they had included a song like "Father of Time" (also played at the BBC session in question) though. Next comes Black Axe and one of my favorite songs from the NWOBHM era: "Edge of the World" is (at least to my ears) a unexpected masterpiece of British heavy music, no less. It's all very simple - the riffs, the lyrics, the guitar leads, the arrangements - and much more melodic than the majority of NWOBHM ever managed to be, but it's all so unbelievably catchy and memorable that it's even a bit difficult to describe: you really have to listen to believe. It's a song about being with a girl while the whole damn world is crumbling to an end, and there's a charm in such a lyrical context (and in the song itself) that hooks you immediately. It's a real shame that this hugely talented band never achieved global domination, as they surely deserved it. Their sole album (released as Wolf) is definitely one to snap up at the earliest opportunity though, so keep your eyes open! 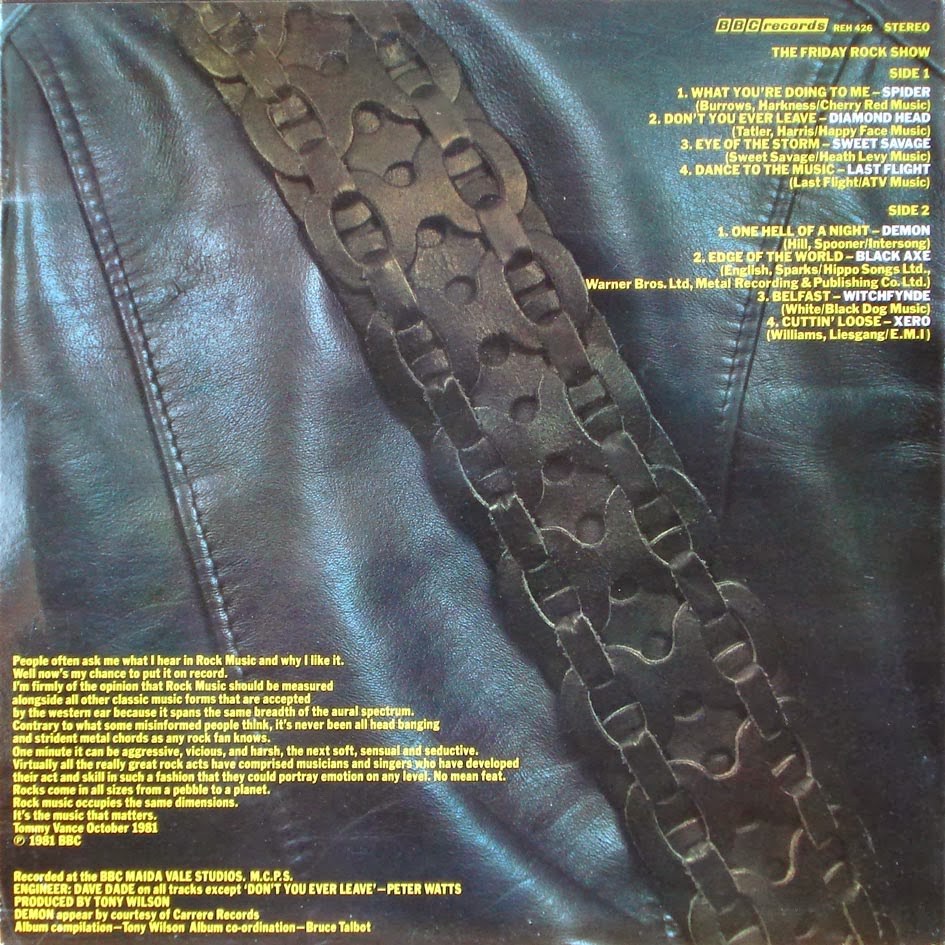 Sadly, this superb track is followed by "Belfast", perhaps the least interesting song Withcfynde (usually a very interesting band) ever commited to vinyl. It's supposed to be a moving ballad about the years of painful civil war in Northern Ireland, but it turns out to be a cold, yawn-inducing slow number that is simply very bad. It's of moderate historical interest for dedicated fans, as it's the very first song with Luther Beltz (then Chalky White) to be released and it would never turn up on any other Witchfynde album or CD, being completely exclusive to this compilation. It's also curious to hear a quasi-satanical band singing about political subjects, but such trivia is far from turning "Belfast" into a more pleasant song, so I consider this inclusion to have been a mistake. Thankfully, the final song of "The Friday Rock Show" is a great Heavy Metal track in the form of Xero's "Cuttin' Loose". It's a strong composition with interesting riffing coupled with a bluesy vocal performance from Moon Willians, a very gifted singer indeed. And it's also a showcase for the talents of guitarist Bill Liesegang, as there's a huge solo going on too (and a surprisingly not-boring one, it must be said). It's very sad that Xero didn't really last the distance (I guess most of you are aware of the infamous connection with Bruce Dickinson and Iron Maiden, and that was a huge setback for them back then), and although this track was not the best choice possible (a different take of "Cuttin' Loose" already appeared on "Metal for Muthas II" compilation a few months previously) it's a nice representation of their considerable talents.

Unfortunately, it would be the last LP from BBC Records to present hopeful NWOBHM bands: although material from such sessions would be included in many band's individual releases in the future, it's a shame that many deserving acts will probably never see their songs released on vinyl or CD. I'm not sure why they never released a third instalment, as the two LPs surely sold quite well. As I told in a previous post, I love cherishing a dream of seeing a "best of Friday Rock Show" CD series coming out sometime, but I know damn too well how much of a remote possibility it is. Thankfully, some recordings straight from radio broadcasts can be located, so at least some sessions can be heard on mp3 format. History and economics aside, "The Friday Rock Show" is a compilation with enough appeal to make NWOBHM fans happy, so I would suggest you to add it to your collection ASAP.

Extra thanks to The Corroseum for picture scans!

Have you been involved with any of the bands mentioned here? Have any extra info and/or corrections? Please e-mail me at drequon@gmail.com and let me know!
Postado por Drequon às 08:27