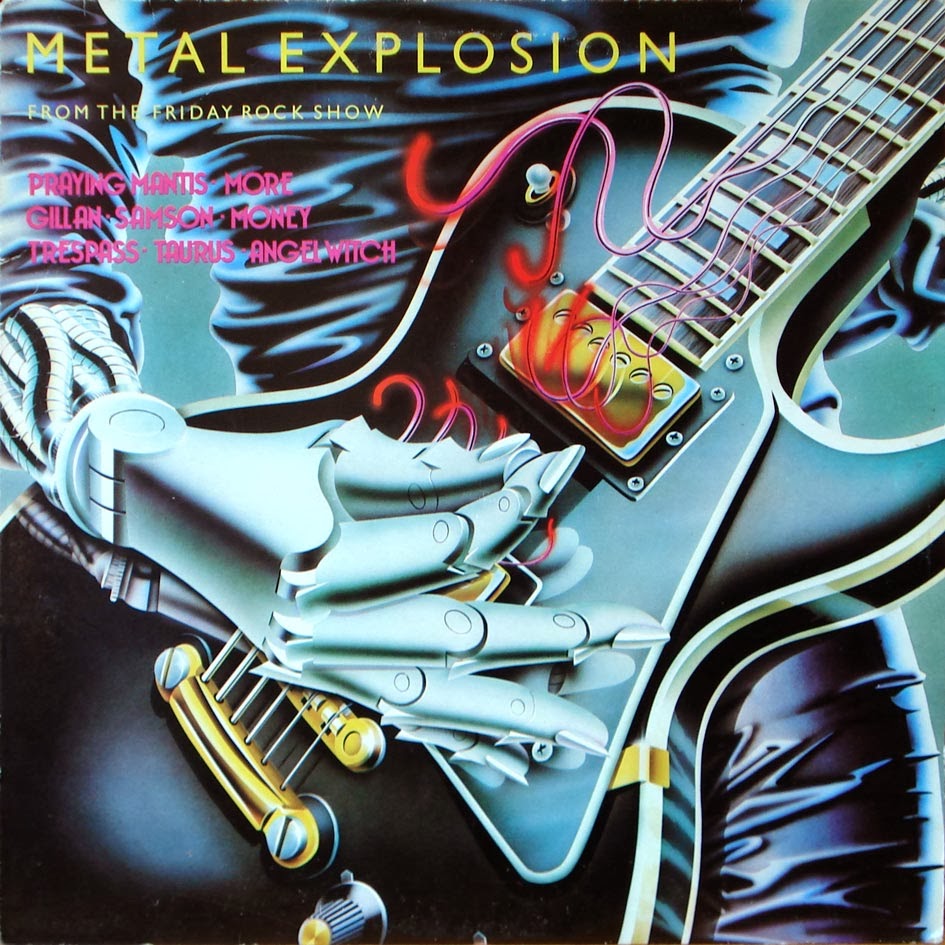 Maybe it's not a must-have when it comes to NWOBHM compilations (surely albums like "New Electric Warriors" and "Metal for Muthas" are far more representative of the genre), but "Metal Explosion" is quite a good one and an important item for any serious collector, for both musical and historical reasons. BBC Radio One's "Friday Rock Show" was an extremely influential radio show in the 80s, being pretty much a mandatory listen for any British Heavy Metal fan - every friday night from 10pm to midnight thousands of long-haired kids would stay in tune for some heavy music, thanks to the enthusiastic and indefatigable Tommy Vance and his determination to give national airplay to talented new bands from all over UK. Recording at the BBC's Maida Vale Studios, the hopefuls would have quality material being heard pretty much everywhere, and it's no surprise how helpful this exposure was for many now well-regarded bands. And releasing selected cuts from such sessions in vinyl format was an obvious, but surely welcomed move - although it's a shame that so few of the heavier bands received such a treatment, while less aggressive types of rock and roll were privileged with countless compilations, EPs and Peel Sessions throughout the years. "Metal Explosion" is the first of two LPs to come out with NWOBHM music from BBC, and I have quite an affection for it - though I never lived in UK and never heard a single Friday Rock Show in my entire life. Go figure.

The fun begins with Samson and their "Take it Like a Man" effort, a number that would also find pride of place on their "Head On" LP. There's not much difference between the two versions, although the live feel gives the song a raunchier vibe and really helps the energy flow, you know. Samson was never my favorite NWOBHM band, but they sure were quite a significant act of the period and this song is a good example of their usual approach. On the other hand, "Johnny Cool" was never the most well-regarded song from Praying Mantis (I guess it was never even played live in the last 20 years or more), but I must say it was always one of my personal favorites - and it is to say something, as I'm a huge fan of the Mantis and really love most of what they did. OK, I know we're not in usual Heavy Metal territory here, as it's much more a boogie-type rock'n'roll with extra energy, all criticism from die-hard metalheads being perfectly understandable. But I have a fond feeling for it - maybe because of its sheer energy, maybe because the astute lyrics, or perhaps the nice guitar work throughout... Well, I like it. A lot. Judge me if you will!

Trespass' "Visionary" is a slow, heavy number with a somewhat grandiose atmosphere and some nice changes in pace to keep the listener's attention. It was a time of maturing for the lads, and this song shows they were mastering their trade at quickening pace - it's actually too bad they didn't manage to release a full LP back in the day, as I suppose they would have done a commendable job. Still, I'm not totally in love with "Visionary": it's a good song, but not one I'm always excited to listen to, to put it straight. Perhaps it's only me, anyway. And then "Paper Chaser", Taurus' contribution and probably my favorite song from the entire album. As singer Terry Keegan himself once told me in an e-mail exchange (hope to publish some info from it very soon!), the song is a "guitar feature", a chance for axemen Terry Swain and Nigel Brown to show their talents. But it's also more than that - it's a hell of a good heavy rocker with tons of energy and a bum-pa-dum-pa-dum that really sets your whole body in motion. The guitar solos work quite effectively, and the end of the song is no less than outstanding. What a nice track, my friends. Too bad they never managed to release a full album through one of their many guises (they later became Raid the North and then The Works), as they surely deserved it.

Opening side B, comes the dependable More and their heavy, aggressive "Soldier" number. Paul Mario Day is one of my favorite NWOBHM singers, and he delivers quite a performance here, really adding to the overall atmosphere with his deep, powerful voice. The main riff is awesome, a pure-blood Sabbath but with the necessary NWOBHM feel to it, and the resulting composition is one of my personal favorites when it comes to More (and they were a pretty respectable band throughout, you know). Thumbs up. Next comes Money, a band that wasn't really a newcomer to the scene (they already had a full album and a few singles released at that point) and that tried a lot to adjust their material to the headbanging spirit of the times. "Leo the Jester" is a quirky number really representative of the band's creativity, and the many twists and turns of the composition become more familiar and rewarding with repeated listens. Still, it's not a song that fit too well into the usual NWOBHM archtype (it's a very 70ish tune with even reminds me of Queen a little), so I would completely understand any headbanger willing to skip it and go straight to the next track. I like it, anyway. 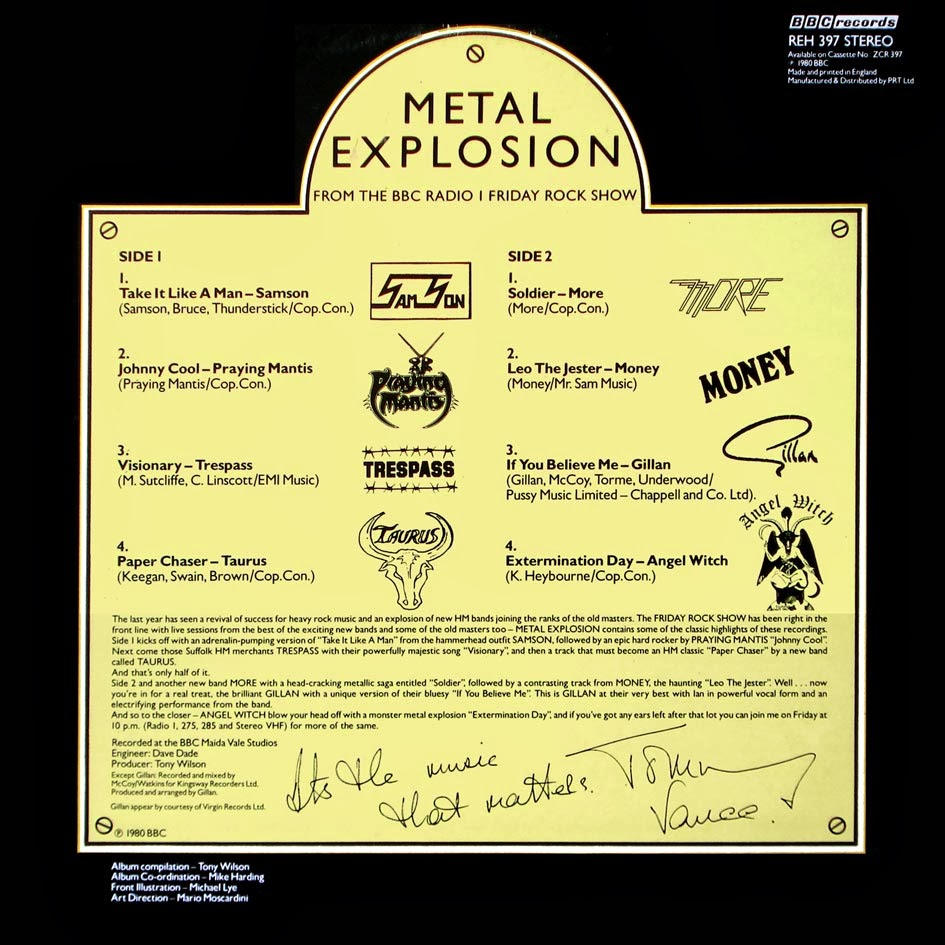 Ian Gillan was a fairly respectable name back in 1980 - not only for his Deep Purple days, but also for his reasonably successful solo career. But oh well, he was nowhere near a hopeful anymore when "Metal Explosion" was released, so it's hard to fully understand the inclusion of "If You Believe Me". Even more considering it is a very large number (around 9mins in total) and not a Heavy Metal one at all, being much more a blues-rock with many pianos and full of vocal improvisations. It's boring and very much out of place here if you ask me. Fortunately, Kevin Heybourne and his Angel Witch come to the rescue, closing proceedings with a kickass rendition of "Extermination Day". I suppose all of you know what to expect from a typical Angel Witch song: abrasive guitars, intense pace, obscure lyrics about some mythological/mysterious subjects and the unmistakable voice of Mr. Heybourne, with its somewhat nasal tone and all that wonderful howls and shrieks. Actually, it's one of the most frenzied songs from their vintage years (and it was never included on any of their studio albums), so be sure to properly bang your head while listening to it, will you?

BBC would release another compilation of NWOBHM around a year later (named "The Friday Rock Show", just to make the origin of the tracks perfectly clear, I guess) and some bands managed to release tracks from the show on individual releases, but fact is that most of the wondrous BBC sessions from NWOBHM bands are unreleased to this day, and probably forever will. Thanks to some surviving recordings straight from radio broadcast, we still can listen to some of it - but I like to fable about how cool would be a series of CDs, perhaps a boxset filled with highlights from Tommy Vance's enduring show (it lasted from 1978 to 1993) to make all NWOBHM fans like me very happy. Not that I really believe it can happen, mind you. But let's be grateful for what we have: "Metal Explosion" is quite a nice listen and I expect all of you to have a copy of it. They could at least license an official reissue in CD format...

Extra thanks to The Corroseum for picture scans!

Have you been involved with any of the bands mentioned here? Have any extra info and/or corrections? Please e-mail me at drequon@gmail.com and let me know!
Postado por Drequon às 07:44