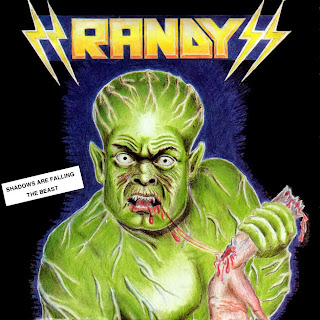 If I had to describe Randy's "Shadows Are Falling" 7'' in a single word, I guess my choice would be to call it "impressive". It's not only one of the finest Metal singles to be released in the mid 80s, but also possibly the best Metal to come out of Denmark at the time - and surely one of my favorite 7'' singles ever! Both "Shadows Are Falling" and "The Beast" will grab you by the neck and immediately demand you to bang your head relentlessly, no matter what - and believe me, you won't be able to resist it! Understandably, this humble slice of vinyl became a huge Metal collectable as time went on, fetching high prices whenever it crops up for sale. Fortunately, the good people from No Remorse Records managed to secure the rights for a CD reissue of Randy's material - and the eponymous CD that came out of this agreement is probably one of the most astute purchases you could ever make (if you're a Heavy Metal fan obsessed with the 80s, that is).

Randy were originally a power trio based in the city of Randers (hmm, maybe there's an explanation for the band's moniker here) that seemingly first got together as early as 1981. After some good years of rehearsals and gigging, Jørgen Jensen (V/G), Brian Andersen (B/V) and Torben Pape (D/V) felt confident enough to have a record to call their own. Released by the tiny Arp Grammofon (a self-financed pressing, I suppose) in 1986, their sole single sold well enough in Denmark (and in some other countries too, such as Greece), and the response was encouraging enough to persuade the lads for another trip into their local record facility. In the event, they laid down seven songs for a demo, that circulated locally the following year. Some band changes happened roughly at the same time, with Jan Bjerremann Jensen assuming as second guitarist for a while and Søren Ahlgreen replacing the departed Torben Pape on drums. Unfortunately, things cooled off as they often do and Randy remained unsigned for the time being, although they somehow managed to stay together until 1993 or thereabouts.

This humble CD I now gladly hold in my possession presents the two classic tunes from Randy's 7'', augmented by the seven demo recordings and three extra live cuts from 1987 (I would love to know where it was recorded, but the liner notes are almost nonexistent, unfortunately). There's really not much left to be said about "Shadows Are Falling" or "The Beast", but it's heartwarming to find out that the remaining cuts are of similar high standard, all bringing to my mind comparisions with Thin Lizzy (at their most metallic), Iron Maiden (ditto) and NWOBHM underground heroes such as Ricochet and High Treason - and you better believe me, such mentions are high praise in my book. Songs like "Nightmare", "Victim of the Night" and "The Razor's Edge" will surely make you feel like wearing your patched denim jacket and bullet belts and having a lot of fun at your local Metal disco (there should be more of these out there, don't you think?). The only unusual moment would be "C'mon Let's Rock", a hard rocker unlikely to raise many eyebrows but still catchy enough to make the grade. The live recordings are very raw, nearly impossible to fully understand in places - but I'm glad enough they were included, as a song like "On the Highway" really deserves to be heard, despite its recording shortcomings. 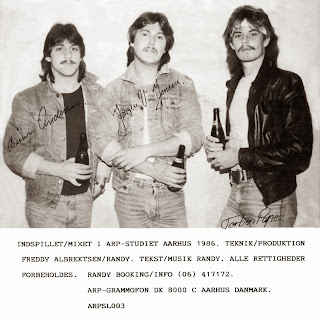 There's not much of a chance to have a Randy reunion nowadays, although Torben Pape (now a guitarist) and Søren Ahlgreen played until recently in a Blues Rock band called Blueshot - they felt discouraged after 4 independent releases and announced they would take a long (perhaps permanent) vacation from 2013 onwards, which is very unfortunate if you ask me. I really hope things will get better and the lads will find the will to continue with Blueshot in the not-too-distant future. Metalheads with a special fondness for the 80s approach to Heavy music are well advised to buy a copy of this CD as soon as possible - and thanks a lot to No Remorse for making such great music available with a healthy remastering and at a reasonable price. 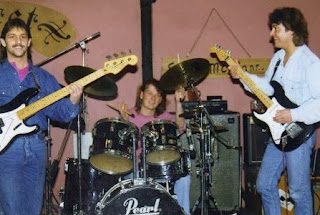 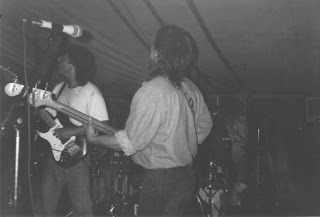 These and other photos can be found at Randy's Facebook group

Special thanks to The Corroseum for picture sleeve scans

Have you been involved with any of the bands mentioned here? Have any extra info and/or corrections? Please e-mail me at drequon@gmail.com and let me know!
Postado por Drequon às 15:03