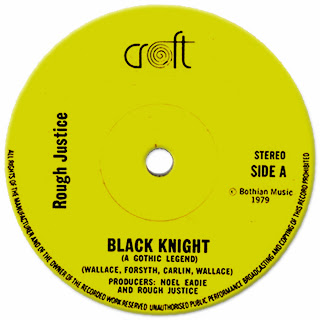 If you are not a Great Britain resident (and most of us aren't, you know), you will be excused for not having a clue on where the Outer Hebrides are. In case you don't know (I know that feel, bro), that's a group of islands at the West Coast of Scotland, also known as the more easily-understandable Western Isles, and the only area of the world where the majority of population (less than 30.000 people, that is) knows how to speak Scottish Gaelic, one of the surviving Celtic languages of yore. Undestandably, the musical legacy of such a remote and sparsely-populated area would never be multitudinous, but there's actually a few bands and artists that came out of the area - there's even an yearly event, the Hebridean Celtic Festival, so I guess there's some respectable artistic activity going on there. For those among you not that much into Folk Music, though, I guess the long-forgotten Rough Justice will be the main focus of interest, as I'm not sure the Outer Hebrides had any other Heavy Metal bands, neither before them or ever since.

Not much from these four brave musicians is known at present, and no one seems to have reliable info on how long they were around or if they ever managed to make any gigs. Quite surprisingly, though, they managed to release a 7'' single way back in 1979 - a self financed affair in a seemingly very small run of a few hundred copies - and there's even more surprising indications thay they got as far as to get a bit of airplay in Radio Scotland, which would be quite an achievement if you ask me. Being from such a remote location, I'm not sure they were really into the then-soaring NWOBHM at the time, being more reasonable to believe that Rough Justice were trying to emulate their 70s Hard/Heavy heroes rather than anything more contemporary. It's also unsurprising that their collective musical abilities were very limited and their songwriting skills won't cause any pleasant surprises on today's listeners - but oh well, just the fact that they got there and did it under such difficult circumstances justifies an extra bit of tolerance in this particular case.

"Black Knight (a Gothic Legend)" is the heavy song on display here - a somewhat intense (albeit not very cohesive) number from an obviously unexperienced bunch, but filled with good intentions and some nice ideas going on here and there (the basslines are very respectable, for instance). There's many rough edges here (some drum rolls end not exaclty when they should, and they really should have considered another take for the guitar solo), but the chorus is good enough and there's a sense of ingenuity throughout which is actually quite funny, working to enhance the listening pleasure rather than spoiling it. Flipside "White Dove", on the other hand, is a ballad unlike to make the listener any favours - the musicianship is poor, the "emotional" ending is annoying and the second guitar is out of tune, no less. I don't have a clue on who produced this, but I guess he really should have noticed that something was not right there! The singer/bassist seemed to have a fair bit of talent, but "White Dove" surely wasn't the best place to showcase it, although the track can have some limited appeal to the most charitable among you.

You surely won't be remotely surprised to know the Outer Hebrides version of Rough Justice didn't really make the rounds for that long - maybe the NWOBHM gave them a fresh breath of life, but it's a safe bet to assume the quartet was no longer active at the mid-80s, probably being disbanded way before that. Still, I kinda enjoyed this 7'' single and it would be awesome to know more about those who made it possible - so if you have any info on them, even the slightest, I would wholeheartedly encourage you to get in touch.

Million thanks to NWOBHM Knightmare for sound files!

Have you been involved with any of the bands mentioned here? Have any extra info and/or corrections? Please e-mail me at drequon@gmail.com and let me know!
Postado por Drequon às 10:30