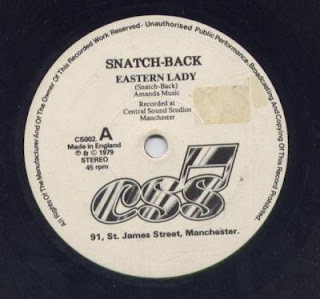 A mystery band at present, Snatch-Back somehow managed to release a 7'' single at the very inception of NWOBHM (and I'm almost sure it wasn't their intention to join this particular ride after all), but left very little information to enlighten us on who they were or where they came from. In his NWOBHM Encyclopedia, Malc MacMillan suggests they were from Manchester or thereabouts, also hinting to some kind of connection with the short-lived Budgie offshot called Freez, but (as the man himself was the first to admit) the corroboratory evidences were too fragile to give us any degree of certainty. Oh well, I guess the musicians once involved with Snatch-Back are still out there somewhere, so if any of you ever get to know the slightest thing about them, please kindly get in touch, will you?

Musically speaking, the four-piece was heavy enough to fit the NWOBHM archetype well enough, but I would say they were hinting to the early 80s as much as they were rooted in the 70s, something which is perfectly understandable in those transitional times. The A-side of their one and only single, "Eastern Lady", even reminds me of even earlier influences - am I completely insane, or there's actually a few influences of none other than Cream in here? The main riff is definitively 70ish, and the solo section (albeit brief) is a complete giveaway to what type of music the guys had in mind when writing this tune. It's an OK song (even though the chorus are too-simple-for-its-own-good if you ask me), but flipside "Cryin' to the Night" is a sensive improvement - a heavier, more intense number with NWOBHM-trademark riffing and a far more interesting song structure (even the slow mid-section works quite well, believe me or not). Dedicated NWOBHM enthusiasts will surely throw some pleasant shapes to this song - no classic of the genre here, that's for sure, but it does the trick when it comes to make a metalhead happy, believe me. 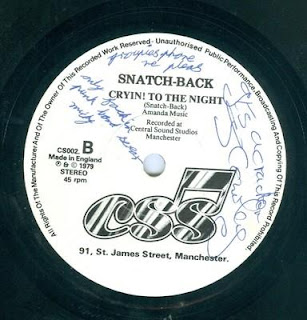 Unfortunately, the sound production is very poor and the mixing was probably made in a hurry, as the listening experience is quite rough to the ears - the vocals, for instance, are sometimes so loud that your eardrums almost shout back to you, asking why in hell you're submiting it to such a torture after so many years of job well done. It's totally forgivable that most Metal fanatics will choose to live a long and healthy life without ever bothering to download this single - let's face it, buying it is not exactly straight-forward and only the most obsessive NWOBHM completists would consider paying huge sums of money for such an item. But if you're reading this humble post until the end, it surely means that NWOBHM found a cozy place in your heart and soul, not to mention your record collection - so yes, I would say that you won't be commiting any serious mistake by adding Snatch-Back to your collection, either in vinyl or digital format.

Many thanks to NWOBHM Knightmare for sound files. Also thanks to Collector's Frenzy for label scans!

Have you been involved with any of the bands mentioned here? Have any extra info and/or corrections? Please e-mail me at drequon@gmail.com and let me know!
Postado por Drequon às 10:20